Iranian media stunned by Iraqi PM's compliance with US sanctions

Iraqi Prime Minister Haider al-Abadi's decision to cooperate with US sanctions has surprised a number of analysts and media in Iran. 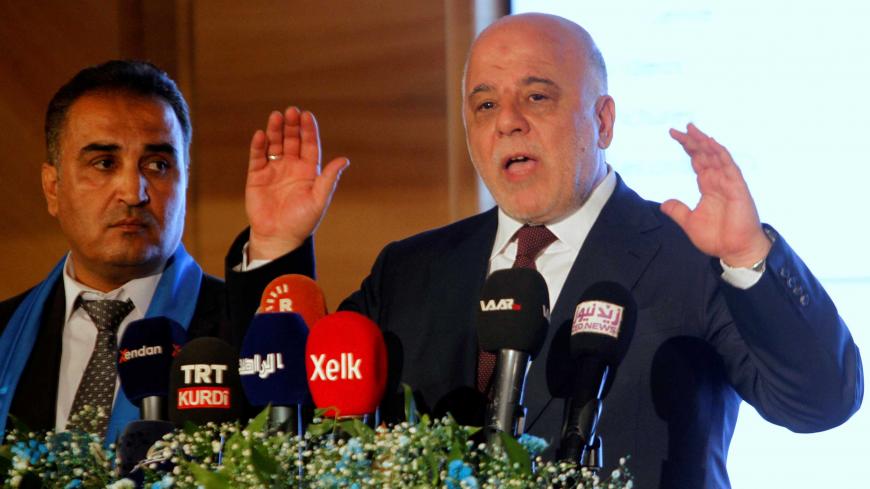 Iraqi Prime Minister Haider al-Abadi’s comments that his country would abide by US sanctions has taken Iranian media by surprise.

"As a matter of principle we are against sanctions in the region," Abadi said at a press conference Aug. 8. "Blockade and sanctions destroy societies and weaken regimes." He added that they are a "strategic mistake" but that Iraq "will abide by them."

Given Iran's immediate and unconditional support for Iraq after the rise of the Islamic State (IS) terrorist group in northern Iraq in 2014, compared with that of the delayed and conditional support of the United States, Iranian media and social media users were very critical of Abadi's support of US sanctions. One official even mentioned memories of the Iran-Iraq War.

Iranian parliamentarian Mahmoud Sadeghi, who is an outspoken official, particularly on Twitter, tweeted, "The Iraqi government, according to Article 6 of Resolution 598 [which ended the Iran-Iraq War], owes the Iranian government 1.1 trillion dollars in reparations for the imposed war [Iran-Iraq War]. The Iranian government, given the restrictions on the people of Iraq, has postponed its demands on these reparations. Now, the prime minister of Iraq, instead of paying up, will cooperate with oppressive sanctions against the people of Iran."

In an article in Russian-funded Sputnik, Emad Abshenas wrote that Abadi, who is still trying to form a government after the Iraqi elections in May, made double-sided comments both criticizing the sanctions and abiding by them in order to attract maximum approval from Iraq's parliament. Abshenas wrote that during Iraqi elections officials attempt to portray themselves as being bipartisan and independent and there is no country better suited than Iran for officials to use in order to achieve this end, either through indirect criticism or with friendly gestures toward Saudi Arabia, Iran's regional foe. Abshenas noted that Abadi visited Saudi Arabia before visiting Iran, despite the closer relations between Tehran and Baghdad.

Abshenas said that Iranians, unlike the Americans, do not incessantly remind the Iraqis of Iranian contributions in the fight against IS, nor of Iran's support for Abadi's rise to the position of prime minister. The article suggested that Abadi may not only turn his back on Iran but could also one day turn against Iran.

A number of domestic Iranian media outlets also covered Iraqi criticism of Abadi's decision to cooperate with US sanctions, particularly comments by Iraqi groups who are politically aligned with Iran.

In an article for IR Diplomacy, analyst Mohammad Sadeghi al-Hashemi wrote that Iran "has always been honorable with respect to Iraq." He asked how Abadi could make such a decision knowing that sanctions will lead to "hunger, poverty, sickness and deprivation." He continued that Abadi's support of US sanctions has "no benefit for the people of Iraq."

Hashemi concluded that Abadi's statement that Iraq will abide by US sanctions indicates that he is seeking Washington's approval for the formation of his government after the elections. He questioned why Iraq should stand alone to support these sanctions when Russia, Europe, China, Pakistan and India have all expressed opposition to them.

Seyyed Hashem al-Mousavi, a spokesman for Kataib Hezbollah, a Shiite paramilitary group that receives Iranian support, asked, "Since when has the Iraqi nation become part of the project to sanction other nations?" Referring to the group's fight against the Islamic State, he said, "We have given blood for the consolidation of the country and we will not allow anyone to encroach upon our independence."

Echoing similar comments made by Hashemi, Mousavi said, "This is not a [United Nations] Security Council decision that we must submit to." He added, "Two-thirds of the world is standing with Iran."

Referring to Iran's support in the fight against IS and Iranian advisers killed in Iraq by the terrorist group, Mousavi said, "It is not clear who is advising you? Is the reward for goodness not goodness that you cooperate with Iran's enemies? How will you answer the people of Iran after they supported us with all of their being? How will you answer the families of their martyrs?"