Iraqi Prime Minister Haider al-Abadi’s recent trips to Saudi Arabia appear to have been coordinated to reduce Iran’s influence in Iraq, but Iranian media outlets do not seem concerned by the apparent Iraqi-Saudi Arabia rapprochement. 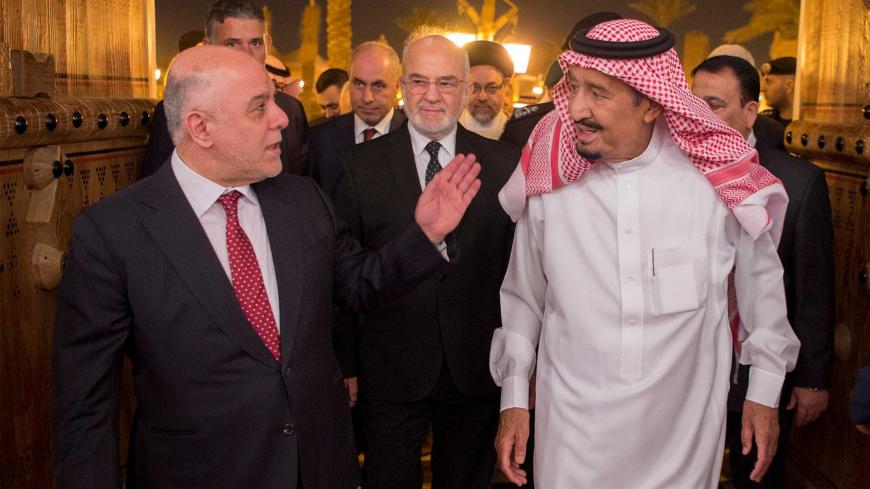 The rise of the Islamic State (IS) in 2014 created the opportunity to make Haider al-Abadi Iraq's prime minister. Since then, he has had to manage a balancing act between Iran and the United States, a task he has addressed openly with Western media. With US President Donald Trump and a revised American Middle East policy much more inclined toward Iran's regional rival Saudi Arabia, the United States has tried to curb Iranian influence in Iraq and the region. Abadi's recent trip to Saudi Arabia is one initiative welcomed and facilitated by the United States in their goal to reduce Iranian regional influence.

Iran's general official position through the Foreign Ministry is that they welcome dialogue and cooperation between all regional countries. However, media outlets — particularly conservative ones believed to be linked to the security agencies in the country — have written much more directly on how they view both US efforts to curb Iranian influence in Iraq and a possible Iraqi-Saudi rapprochement.

Mashregh news wrote of Abadi’s trip to Saudi Arabia, commenting that creating distance between the Iraqi and Iranian governments has “turned into a diplomatic priority” for the United States and Saudi Arabia. According to the Mashregh article, the United States will use two simultaneous tracks to apply pressure on Baghdad to distance itself from Tehran: one being bilateral agreements, the other being to use Saudi Arabia. Mashregh wrote that the coordination council between Iraq and Saudi Arabia is one of the initiatives supported by US Secretary of State Rex Tillerson to bring the two countries closer.

The Mashregh article also listed a number of obstacles to any possible Saudi Arabia-Iraq rapprochement and a break from Iran: for one, Iraqi domestic politics. The article stated that domestic actors such as the Islamic Dawa Party, which has a significant role in determining a prime minister, and the influence of Iraq’s Grand Ayatollah Ali Sistani on society both have considerable impact in deciding the direction of the country. A second obstacle to reducing Iran-Iraq relations in Iraq is that the two countries have strong and historical relations, and millions of Iranians visit Iraq’s holy shrines every year. The third obstacle to Saudi Arabia-Iraq rapprochement is Saudi Arabia's role in funding extremist groups and how Saudi clerics issue anti-Shiite fatwas.

According to Khabar Online, Tillerson had recommended that Saudi Arabia, the United States and Iraq each appoint a representative to create a working group. According to the report, Saudi Arabia is onboard with forming such a committee, which was described as seeking to “consolidate political” relations. However, Iraq reportedly has not responded yet to the recommendation.

A headline in Tabnak asked, “Will Haider al-Abadi turn his back to Iran?” The article stated it is not possible to determine whether Iraq knows that the United States is pursuing an anti-Iran policy and, if so, how far they should cooperate with such policies. Rather, the article viewed Abadi’s trip as having to do with a post-IS Iraq in which war-torn regions will need investment and reconstruction, and this is where Saudi Arabia will try to gain influence in Iraq.

In addition to Saudi Arabia, Abadi also traveled to other American allies in the region, including Egypt and Jordan. Afterward, Abadi traveled to Turkey on Oct. 25 and arrived in Tehran the same evening. On Oct. 26, he met with Iranian President Hassan Rouhani and Supreme Leader Ayatollah Ali Khamenei. The latter reportedly told the Iraqi premier, “Unity was the most important factor in your gains against terrorists and their supporters. Don’t trust America. … It will harm you in the future.”