The United States sees a way out of the political crisis between Baghdad and Erbil as the Kurdistan Regional Government offers to suspend the results of its independence referendum and open dialogue. 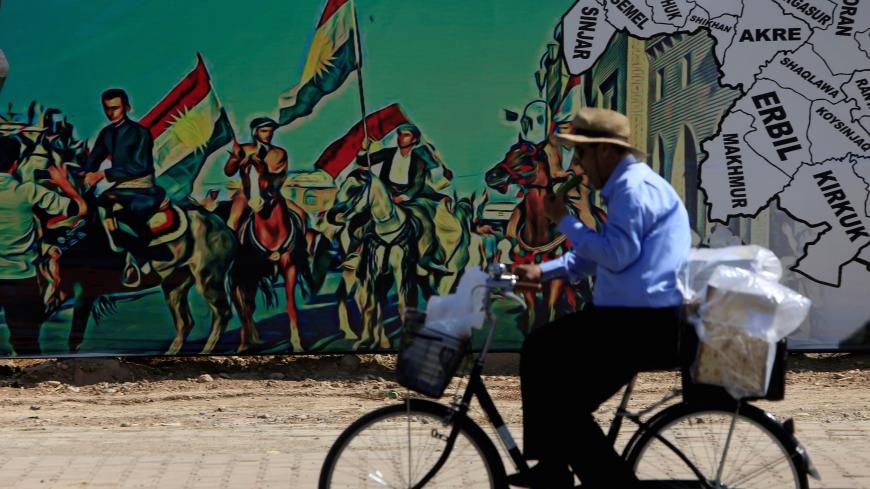 A man rides a bike near a mural supporting the referendum for the independence of Kurdistan in Erbil, Iraq, Sept. 24, 2017. - REUTERS/Alaa Al-Marjani

WASHINGTON — The United States said today that it welcomed the offer by the Kurdistan Regional Government (KRG) to suspend the results of its independence referendum and open a dialogue with Baghdad as a way to ease an escalating crisis between two critical US allies in the fight against the Islamic State.

The KRG cease-fire offer came a day after Secretary of State Rex Tillerson, on an unannounced trip to Iraq, expressed sadness at the outbreak of violence and political turmoil between Baghdad and Erbil, and urged dialogue.

“We are concerned and a bit saddened by the recent differences that have emerged between the Kurdistan Regional Government and the Iraqi central government,” Tillerson said at a meeting with Iraqi Prime Minister Haider al-Abadi in Baghdad Oct. 23.

“We have friends both in Baghdad, and we have friends in Erbil, and we encourage both parties to enter into discussion and dialogue,” Tillerson urged. “I think if both parties commit themselves to a unified Iraq, to … the Iraqi constitution, I think all differences can be addressed and the rights of all can be respected and Iraq will have a very secure and a prosperous future.”

In a remarkable climbdown, the KRG, in a statement Oct. 25, proposed an immediate cease-fire, a freeze on the results of the independence referendum last month and to begin a dialogue with the Iraqi federal government.

“As Iraq and Kurdistan are faced with grave and dangerous circumstances, we are all obliged to act responsibly in order to prevent further violence and clashes between Iraqi and Peshmerga forces,” the KRG statement said.

“In order to fulfill our responsibilities and obligations towards the people of Kurdistan and Iraq, we propose the following to the Iraqi Government and the Iraqi and world public opinion:

1. Immediate ceasefire and halt all military operations in the Kurdistan Region.

2. Freeze the results of referendum conducted in the Iraqi Kurdistan.

3. Start an open dialogue between the Kurdistan Regional Government and Iraqi Federal Government on the basis of the Constitution.”

“The federal and regional governments have both expressed willingness to engage in dialogue on the basis of the Iraqi constitution," a State Department official told Al-Monitor. "We encourage them to quickly present a timetable to begin these discussions.”

“While in Baghdad this week, the Secretary urged all parties to renew their commitment to a unified Iraq and encouraged both parties to enter into discussion and dialogue," the official added.

The Kurdish climbdown came in the wake of Iraqi government forces seizing the disputed city of Kirkuk this month, closing Kurdish airspace and taking control of key Kurdish border crossings in rejection of the KRG’s referendum on independence last month.

KRG President Massoud Barzani and the KRG leadership realized they were losing ground and that time was not on their side, a longtime American consultant in Iraqi Kurdistan said.

“They were stuck,” the American consultant, speaking on condition of anonymity, told Al-Monitor, referring to the Iraqi Kurdish leadership. “Iraqi forces were making progress in their fighting, capturing land and space … that would be detrimental to the KRG.”

“And they were stuck, diplomatically speaking,” the consultant continued. “You had the Iraqi government put some serious clamps on the KRG in the way of airspace and borders. … The status quo was untenable for the KRG … and time was running against the KRG.”

Meanwhile, he added, “You had Baghdad, in a pretty comfortable position, without doing much more of anything. … And I think the KRG leadership, Massoud Barzani, realized that he was stuck and losing time.”

The Kurdish offer “is another clear sign that … Haider al-Abadi has emerged as the key kingmaker in Baghdad,” Heras told Al-Monitor. “And the reason for Abadi’s position is because he is not tied to one particular country, whether the US or Iran, but is considered acceptable by a broader range of local and foreign actors that see in Abadi a wartime prime minister, who, better than his predecessor Nouri al-Maliki, could conduct a military campaign against an enemy that threatened to irrevocably shatter Iraqi.”

“My assessment would be that Massoud Barzani realized there are tremendous obstacles put in place before him to continue [with his independence bid], and by agreeing to terms laid down by Baghdad, Massoud is hoping Abadi will agree to allow Massoud’s family to continue to function as a sort of power center in the KRG,” Heras said.

“There is a strong sense now that Massoud overplayed his hand and risked the position of his family,” Heras said. “And Massoud cannot imagine a future Kurdistan without a Barzani at the helm. … This is his way of trying to head off any attempt by Baghdad to undermine the ability of his children, in particular his son Masrour, to rule in his place.”

Some longtime Kurdish watchers anticipate that President Barzani may announce he is stepping down soon and transferring some of his powers to the Kurdish parliament and his nephew, KRG Prime Minister Nechirvan Barzani.

Washington will be relieved at the opportunity to get Iraqi-Kurdish relations back on track.

The Kurdish offer came after Abadi made a tour of regional capitals, beginning with a visit last weekend to Saudi Arabia for the inaugural meeting of the Saudi-Iraqi Coordination Council, also attended by Tillerson. Washington has worked to promote Iraqi-Saudi ties as a way to try to reintegrate Iraq into the Arab world and counter what the United States sees as potentially destabilizing Iranian influence in Iraq.

Abadi said Wednesday that he did not want Iraq to become the venue for US-Iran competition and hostility.

“We would like to work with you, both of you,” Abadi told The Washington Post, about the United States and Iran. “But please don’t bring your trouble inside Iraq. You can sort it anywhere else.”

Update: Oct. 25, 2017. This article has been updated to add a response from a State Department official.