On his first official visit to Washington, Iraqi Prime Minister Haider al-Abadi showed how hard it is for his country to juggle conflicting outside powers. 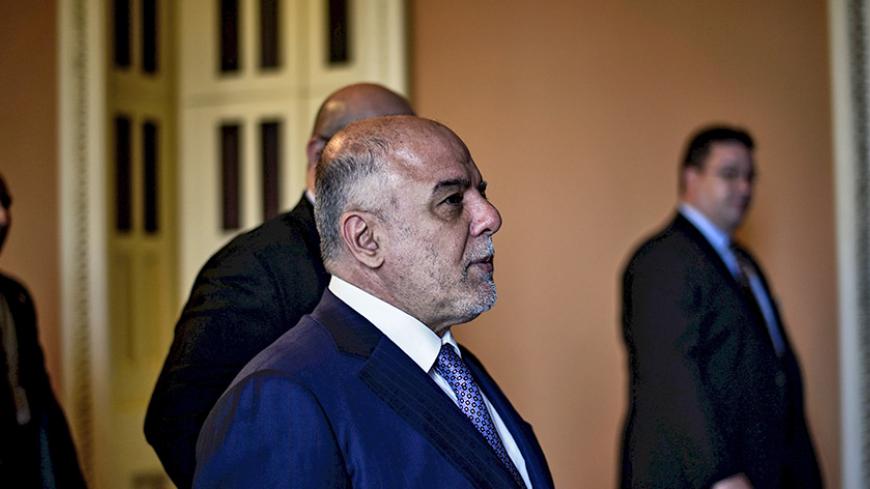 Iraqi Prime Minister Haider al-Abadi walks to a meeting with the Senate leadership at the US Capitol in Washington, April 15, 2015. - REUTERS/James Lawler Duggan

WASHINGTON — Iraqi Prime Minister Haider al-Abadi, concluding his first official visit to the United States, urged a swift end to the war in Yemen, telling a Washington audience April 16 that the conflict there was creating "fallout" and deepening an already serious sectarian divide in the Middle East.

At the same time, Abadi, appearing at the Center for Strategic and International Studies (CSIS), tried to smooth over criticism of Saudi Arabia for its bombing campaign against Houthi forces in Yemen. A day earlier, the Iraqi prime minister infuriated the Saudi government by telling a small group of US journalists that “there is no logic to the [Saudi] operation at all in the first place.”

Abadi tacked on to his prepared remarks at CSIS an explanation for his criticism. “I feel very free to talk to regional leaders, including [Saudi] King Salman [bin Abdul-Aziz Al Saud],” he said, adding that he was happy to hear that the Saudis have finally appointed an ambassador to Baghdad. At the same time, the Iraqi leader said, “We have our own opinion. … An end to this war in Yemen must be very soon and the only way forward is a political solution by the Yemenis themselves.”

Questioned later, however, Abadi could not or would not name the new Saudi ambassador or say when he would arrive. Abadi did not answer a question about whether he had spoken directly to Salman or other Saudi officials about the flap over his Yemen remarks.

“My intention is not to criticize anybody,” he said. “Yemen will have its fallout on us. … We are all in the same boat in the region and if anyone makes a hole in that boat, we all will sink.”

Since he was confirmed in office in September 2014, replacing the divisive Nouri al-Maliki, Abadi has tried to placate conflicting outside powers while leading a desperate fight to push back the group that calls itself the Islamic State (IS). A Shiite Muslim and member of the Dawa Party, Abadi needs simultaneously to maintain close relations with neighboring Shiite Iran, retain and increase US support and reduce Saudi and other Sunni hostility to the Shiite-led government in Baghdad.

This juggling act is clearly a challenge.

Asked by Al-Monitor whether he has the power to tell Iran what to do in Iraq, Abadi, who speaks fluent English, said, “We must have a say on what the Iranians do and don’t do in Iraq. I have told my Iranian friends very bluntly that they are helping Iraq, thank you very much, but that everything must be done through the government of Iraq. Every other way, I consider it ... as hostile to Iraq. They claim they are doing it through the government.”

Iran intervened in Iraq in a major way last summer to stop IS from capturing Erbil and Baghdad and has close relations with Shiite militias that have been doing much of the fighting. The militias are accused of committing severe human rights abuses against Iraqi Sunnis, including in a recent battle to retake Saddam Hussein’s hometown of Tikrit.

Pictures of Iranian Quds Force leader Qasem Soleimani on the Iraqi front have popped up frequently on social media, although less so since President Barack Obama's administration began using air power against IS in Tikrit. There has also been graffiti in Persian appearing in recaptured areas of Tikrit, Abadi said.

“I’ve been talking to the Iranians about it,” Abadi said. “They claim it’s not them doing this propaganda.”

Despite recent advances against IS in Tikrit, the extremist group has reportedly seized several villages outside Ramadi and Baghdad’s hopes to retake Anbar province and Iraq’s second-largest city, Mosul, look uncertain.

Iraq, despite its oil wealth, is also suffering from a lack of funds due to the war against IS and the recent drop in oil prices.

In Washington, Abadi met with Obama and officials at the World Bank and the International Monetary Fund (IMF), seeking additional aid both to defeat IS and rebuild his country.

“We must not only win the war, we must also win the peace,” he said.

The United States has promised $200 million in humanitarian aid. Iraq is seeking as much as $700 million from the IMF and is planning to issue bonds to help cover a $25 billion budget deficit.

Abadi asserted that Iraq has “great economic potential as a business and investment partner” and listed areas where the country is seeking such investment: transportation, electrical power, water supply, schools, hospitals and information technology.

On the military front, Abadi denied media reports that he came to Washington with a shopping list of new weapons, including drones and Apache attack helicopters. He said that Iraq was looking for more US help to speed up the time between “asking for a mission and actually getting a mission” to bomb IS targets.

US experts on Iraq say it needs “a more robust US advisory role,” in the words of Linda Robinson, a military expert at RAND. She told Al-Monitor that the 3,100 US military personnel in Iraq are confined to a handful of bases and would be more useful if they were “embedded at a lower level” in Iraqi combat units to help troops coordinate across units.

The Obama administration has been reluctant to put US officers in harm’s way.

Robinson said that Abadi also needs to do more politically to increase Sunni support for his government. A new law allowing the creation of local national guard units is making its way through parliament but does not specify who will choose commanders — the central government or provincial authorities, she said.

Abadi said he was making strenuous efforts to reach out to Iraq’s Sunni minority but did not clarify how he would decentralize authority or share Iraq’s oil resources.

His government is also under fire for failing to protect journalists trying to cover the fighting.

Ned Parker, the Baghdad bureau chief for Reuters, fled Iraq recently in the face of death threats for reporting on the murder of a detainee by Iraqi police in Tikrit. Speaking to NPR on April 16, Parker said Abadi had given a speech April 9 accusing unnamed reporters in Tikrit of trying to besmirch Iraqi forces. On the eve of the prime minister's departure for Washington, Parker said, Abadi’s office put out a statement defending press freedom, but only in English.

Asked about this by Al-Monitor, Abadi said he was not sure why Parker had left Iraq and suggested that the threats against the journalist on social media were really directed against Abadi. The prime minister also mentioned the statement issued by his office. When told that it had only come out in English, the Iraqi leader said, “OK, we translate it!”