Under Nouri al-Maliki, the Iraqi government did not hide its strong ties with Iran, but with a new administration in place, Haider al-Abadi is trying to cultivate a more balanced policy toward its neighbors. 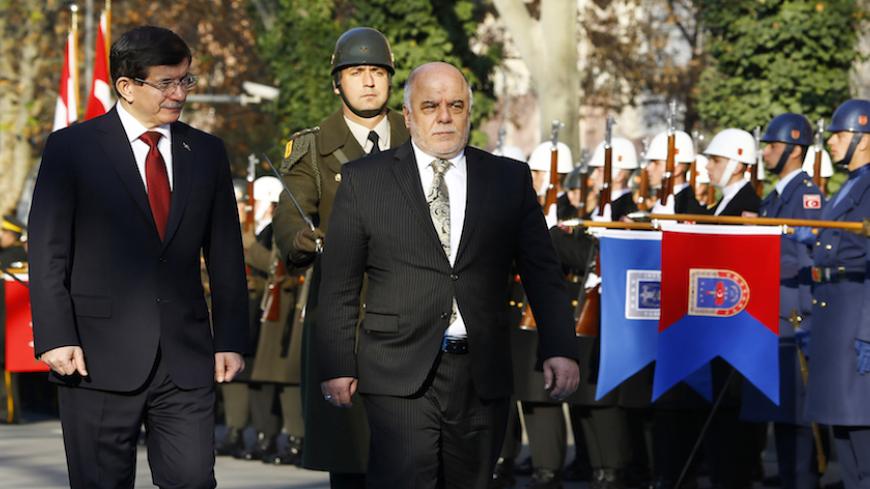 The prime minister's palace in Baghdad has had a new occupant since August 2014. After eight years in office, Iraqi Prime Minister Nouri al-Maliki was succeeded by a UK-educated politician. Regional and international criticism aimed at Maliki forced him to give up his chair in favor of another member of the Dawa Party, Haider al-Abadi, although he had received more votes in the parliamentary elections.

During his time as prime minister, Maliki maintained the closest of relations with Iran. Abadi, however, views things differently. Although the first foreign trip made by Abadi, a former Dawa spokesman in the United Kingdom, was to Tehran in October 2014, his comments following the visit signal that Iraq is changing its regional foreign policy.

Abadi traveled to Turkey in November 2014 and was welcomed by Turkish officials. Turkey's Minister of Foreign Affairs Mevlut Cavusoglu welcomed Abadi’s trip. “When Maliki was prime minister, the smallest of issues would become problematic," said Cavusoglu. "However, now that Abadi is in charge, things have changed.” During his Turkey visit, Abadi said, “Iraq is interested in sending its oil to the world market via Turkey.”

In fact, this has been the case for many years now. A major portion of the oil produced in Iraqi Kurdistan reaches the world market via Turkey. The central government in Baghdad had previously protested against Turkey transferring oil from Kurdistan, but it now appears that Abadi wants to approach this issue differently.

With the aid of a pipeline built in 2013 and inaugurated in 2014, the Kurdistan Regional Government (KRG) sent its first oil cargo to the international market. At the time, the central government in Baghdad strongly protested the KRG's decision to act independently regarding this matter. Back in January 2014, Maliki told Reuters, "The government of Iraq holds the Turkish government legally responsible and reserves the right to demand compensation."

The emergence of the Islamic State (IS) made the relationship between Iraq and Turkey even more problematic. Turkish Prime Minister Ahmet Davutoglu’s controversial comments, blaming the creation of IS on the Iraqi government’s policy of suppressing its Sunni population, worsened Baghdad-Ankara ties. Meanwhile, Turkish media outlets tried to present the Shiite militias fighting IS as a serious threat to the future of Iraq. After returning from a trip to Bosnia, Foreign Minister Cavusoglu said, “We need to weaken the position of Shiite paramilitary forces in Iraq. These groups are murdering Sunni citizens with the excuse of fighting against Daesh [IS].”

Siamak Kakaie, an expert in Turkish and Iraqi politics, told Al-Monitor, “Tension between Turkey and Iraq started in 2011 when [Recep Tayyip] Erdogan accused the prime minister of Iraq of being self-centered, and continued to further expand Turkey’s relations with the KRG. His actions resulted in more divergence between the central government in Baghdad and the KRG.” This is while, during Erdogan’s July 2008 trip to Baghdad, the two nations created a council of strategic collaboration. However, this collaboration was short-lived. In 2012, Erdogan and Maliki’s harsh mutual criticisms weakened Baghdad-Ankara political relations.

Kakaie said, “Turkey’s support for terrorist groups inside Iraq has also resulted in Iraq adopting a negative approach toward Turkey. It appears, however, that Abadi taking office has coincided with Turkey partly changing its policies, and therefore, Abadi has also adopted a more positive approach toward Ankara.”

Iraq’s close relations with Iran have also compounded the country's problems with its neighbors. Qasem Mohebali, former director-general of political affairs of the Middle East at Iran’s Foreign Ministry, told Al-Monitor, “Maliki’s tribal policies have destroyed the relationship between the central government and the Kurdish, as well as Sunni, groups in Iraq. His policies have even played a role in the creation of Daesh [IS].” Mohebali said, “Maliki’s policies were not beneficial for the Islamic Republic either. Tehran should not pay the price for the tension between the central government and various political groups in Iraq or between Iraq and its neighbors.”

Abadi, who has inherited the problems of Maliki’s administration, has a difficult road ahead of him in governing the country and controlling its borders. It appears that Abadi has decided to have a balanced foreign policy instead of relying only on Iran. A few months after assuming office, Abadi traveled to Turkey and talked about solving the problems between the two countries and expanding relations. Furthermore, Iraqi President Fouad Massoum, a Kurd, also traveled to Saudi Arabia, which had closed down its consulate in Iraq after the fall of Saddam Hussein.

Yet, despite all this change, Iraq has continued to maintain its relations with Iran, though not at the same volume as before. Abadi announced in April 2015, before going to Washington, that the relationship between Iran and Iraq is “balanced.” However, as soon as he stepped foot in the United States, he asked Iran to respect Iraq's sovereignty during a speech at the Center for Strategic and International Studies.

Abadi also expressed dissatisfaction with the fact that Quds Force Cmdr. Qasem Soleimani is playing an important role in the fight against IS and that he has communicated his dissatisfaction to Tehran as well. Abadi told the German weekly Der Spiegel in an April 3 interview that Iran is fighting against IS because the Iranian government considers the group a national threat. On this issue, Mohebali told Al-Monitor, “When a government is part of the Arab world, it should not have one-sided positions in favor of Iran. Doing so will increase its neighbors' sensitivities. Mr. Abadi has made these comments about Iran, but he has also condemned Saudi Arabia’s attack on Yemen. After the emergence of Daesh [IS] in Iraq, it was advertised throughout the Sunni world that Iran is one side of this conflict. Naturally, wanting to create balance and wanting to deviate from Maliki’s policies, Mr. Abadi has to make comments like this.”

In any case, Abadi’s Iraq is presenting a new face — a face that is no longer hated by its Arab neighbors, a face that has made Turkey interested in collaborating with Iraq. Tehran is also happy that its ally is lessening the tension between itself and its neighbors.