If Iran has its way, Abadi won't see a second term in Iraq

Iran is seeking to preserve its influence in Iraq and hopes Prime Minister Haider al-Abadi, who it believes is undermining its efforts there, will not lead the next government. 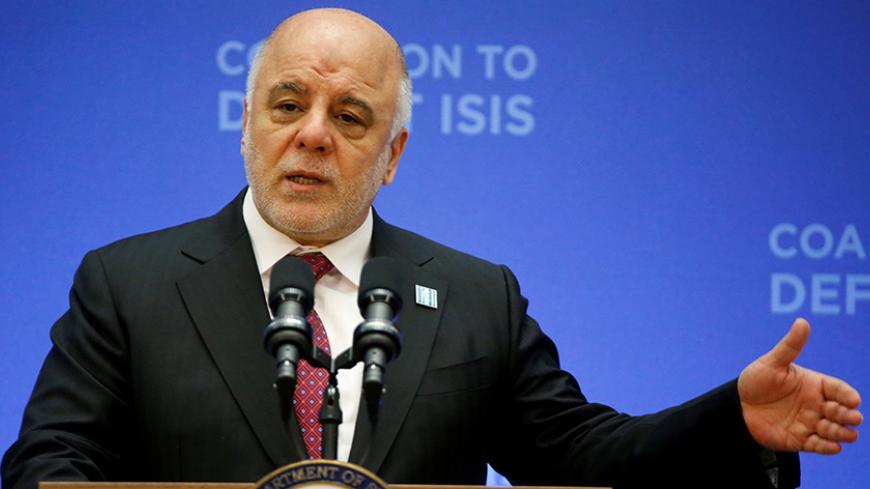 Iraqi Prime Minister Haider al-Abadi delivers remarks at the morning ministerial plenary for the global coalition against the Islamic State, at the State Department in Washington, March 22, 2017. - REUTERS/Joshua Roberts

BAGHDAD — In a military parade July 15 in central Baghdad, Iraq celebrated its victory against the Islamic State (IS) in Mosul. In what many people view as an intentional snub of Prime Minister Haider al-Abadi, one regiment of the Popular Mobilization Units (PMU) wore what appeared to be the uniform of Iran's Islamic Revolutionary Guard Corps.

Iraqi satellite channels broadcast the prerecorded video of the parade, showing a number of members not wearing the same uniform as the rest of the security formations parading in front of Abadi and the families of veterans who were killed in combat. This generated controversy on social media.

Abadi rivals — those close associates of Iran — seemingly intended to embarrass him or send him the message that they are not at his disposal at all times. This has prompted the question: What does Iran want from Abadi?

Abadi's ties to Iran don't seem to be flourishing. Tehran believes Abadi stands in the way of its projects and allies in the country. This is while Abadi believes his eastern neighbor is seeking full control of the country.

Alaeddin Boroujerdi, head of the Committee for National Security and Foreign Policy of Iran's Shura Council, said July 2, “Terrorists will be able to rule over Damascus and Baghdad if they are not [protected by] the Quds Force," which is the special forces unit of the Islamic Revolutionary Guard Corps.

In a June 20 meeting with Abadi, Iranian Supreme Leader Ayatollah Ali Khamenei warned against the implementation of any measure that would weaken the PMU. As Abadi is often accused of wanting to incapacitate or dissolve the PMU, Khamenei's message wasn't just an offhand remark.

Khamenei’s and Boroujerdi’s statements mark a new chapter of Iran's policy toward Iraq. The strategy that was in place to control Shiite political parties is no longer enough. Iran wants to expand its geographic and political influence to the Sunni areas that have been retaken from IS.

Abadi backers stand in the way of former Iraqi Prime Minister Nouri al-Maliki's supporters, who are close to Iran and enjoy political and military support as they run the so-called deep state that appears to be conducting Iraqi state affairs.

Fallah Mishaal, former editor-in-chief of al-Sabah newspaper, told Al-Monitor, “Iran perceives Iraq as a precondition for its national security. Through [Iran's] support for Shiite political parties in power, it seeks to prevent any attempt at disrupting the presence of these parties within the Iraqi state institutions.”

He continued, “In light of the Iranian strategy inside Iraq, Abadi is required to take stances not intersecting with the Iranian project, by abstaining from suspending the PMU's role in the Iraqi security and military dossier. This is given that many of its factions succumb to the instructions of Khamenei.”

Abadi and Iran disagree over a critical point about the PMU. Abadi believes the demand for some armed Shiite groups within the PMU to join the fighting in Syria to be “unconstitutional,” contrary to the Iranian stance that encourages fighters to stand alongside the regime of Bashar al-Assad.

Abadi is a member of the Islamic Dawa Party, which is closely linked to Iran. Since he became prime minister, however, he has sung a tune different from those partisans and friends of Iran. For this reason, Iran believes Abadi is working to neutralize Tehran's influence and partisans in Iraq.

According to the Wall Street Journal, Iran seeks to regain influence in Baghdad, Damascus and Beirut and will reap significant gains in that regard from the recent battles against IS.

Abdul Rahman al-Jubouri of the National Endowment for Democracy told Al-Monitor, “There are three Iranian paths in Iraq’s near future: The first is to preserve the influence acquired over the past 14 years; second is to preserve a particular influence in the western parts [the Sunni areas]; and third is to look for Shiite liberals on the Iraqi political map." Since Iraq is a secular state constitutionally, Iran's Shiite government needs liberal Shiites in the Iraqi government to maintain its influence there.

He added, “Iran has warned against taking measures such as dismissing the PMU or making do without them. In contrast, Abadi wants to disavow from forces fighting in Syria. This is in itself a point of divergence between both sides.”

Iran’s military influence has expanded since IS took control of Mosul in June 2014. Nevertheless, it has faced obstacles placed by Abadi, unlike Maliki when he ran the government. Iran is dissatisfied with Iraqi moves to get closer to the Arab region in general, and the Gulf in particular.

Iran will not support a second term for Abadi and will probably seek to oust him or weaken his political efforts before and during the elections, which are tentatively set for April. Iran wants the return of its ally Maliki, who is disappointed with Abadi. This will probably result in an election race even more fierce than the last one.

Iran's stance toward Abadi is not personal. Rather, it is a message to London and Washington, as the main supporters of his government. This is why Iran wants the next prime minister to be closer to Maliki than to Abadi. Iran will not content itself with merely looking for a Shiite prime minister, but will go further, to the point of backing up the nomination of a candidate from the PMU to lead the next government.