The recent agreement between Hezbollah and a group of pro-Islamic State fighters to arrange their evacuation from the Lebanese-Syrian border to the Syrian-Iraqi border triggered an outburst of public anger against Hezbollah and Iraqi factions fighting alongside Hezbollah on Syrian territory for years. 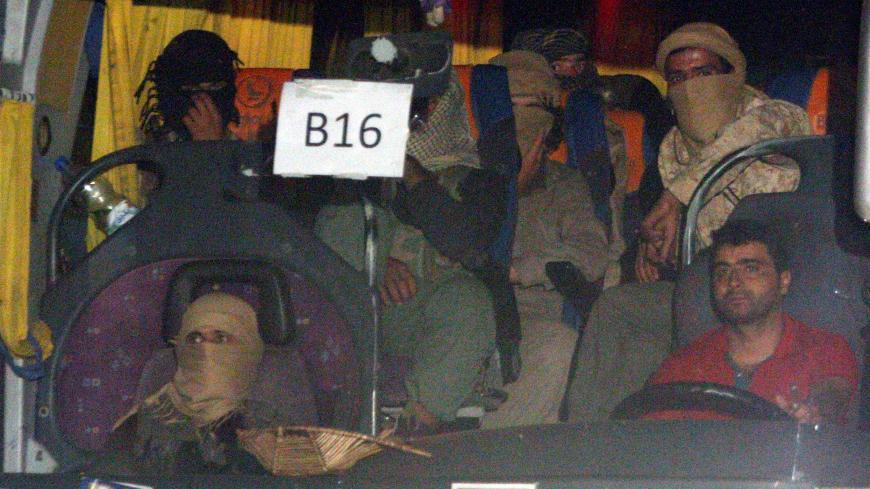 A convoy of Islamic State fighters and their families begin to depart from the Lebanon-Syria border zone in Qalamoun, Syria, Aug. 28, 2017. - REUTERS/ Omar Sanadiki

On Aug. 30, 308 Islamic State fighters along with 670 members of their families were allowed to evacuate from the Qalamoun area along the Lebanese-Syrian border to the town of Bou Kamal in Deir ez-Zor province near the Iraqi border. The operation was carried out using 16 buses and ambulances sent by the Syrian government in collaboration with Hezbollah.

Bou Kamal is located opposite the Iraqi al-Qaim area on Syrian territory. The distance between both areas that are under IS control since 2014 is about 22 miles. The evacuation of IS fighters to Deir ez-Zor allows them to take part in the resistance against Iraqi forces set to liberate al-Qaim. A Sept. 4 report by The Washington Post states that IS fighters on a stranded convoy have escaped to Iraq.

The criticism against the Hezbollah deal was widespread in Iraq, including among several Shiite religious figures, the Kurdistan government and Sunni tribal leaders. It also resulted in creating a clear distinction between pro-Iranian forces in Iraq and national independent forces. On the one hand, the pro-Iranian factions within the Popular Mobilization Units (PMU), former Prime Minister Nouri al-Maliki and Shiite clerics loyal to Iran supported the deal, while on the other hand, current Prime Minister Haider al-Abadi, the Sadrist movement and a number of Iraqi Shiite clerics opposed the deal strongly.

In an Aug. 28 interview on Al-Manar TV, Hezbollah Secretary-General Hassan Nasrallah admitted the agreement was concluded with Hezbollah, citing the fact that the arrangement allowed to pinpoint the location of bodies of Lebanese army soldiers as well as Hezbollah fighters. Nasrallah said that had Hezbollah continued the fight to eliminate IS fighters, these bodies would have been lost forever. This means that Nasrallah preferred to reveal the fate of a number of bodies over the losses that would be incurred by these fighters on Iraqi forces in the upcoming liberation operations.

Last year, Nasrallah had warned the Iraqi government that the United States is conspiring to open the way to IS fighters in Mosul to flee to Syria, while praising the Iraqi forces for not allowing IS fighters in Fallujah to head to Syria and eliminating them once and for all. He said, “True victory in Iraq means bombing IS, arresting its leaders and members, throwing them in prison and offering them a fair trial — not allowing them to flee to Syria.”

Hezbollah’s deal with IS outraged Abadi, who stated Aug. 29 that “transporting such large numbers of terrorists across long distances to areas neighboring the Iraqi border is unacceptable, disturbing and is considered an offense to the Iraqi people.” He also criticized the lack of coordination with the Iraqi side on such matters and pointed out that Iraq is currently eliminating the IS threat inside Iraqi territory and under no circumstances is allowing a safe passage to Syria. He noted that the deal struck by Hezbollah will cause more losses to the Iraqi and Syrian people and that striking deals with IS is completely unjustified at this time.

Parliamentarian Ali al-Badri of the National Alliance considered the deal a conspiracy against the Iraqi people and addressed Hezbollah by stating, “The blood of our youth and our people is not cheaper than Lebanese blood. Today the Syrian government is rewarding the young Iraqi men who went to defend the holy sites and gave their lives in Syria by evacuating IS fighters to the Iraqi border.”

Hisham al-Hashimi, an independent researcher and specialist in security affairs and armed groups, wrote in a Facebook post Aug. 29, “Only a selfish ally transfers the IS threat from Lebanon to Iraq, while Iraqis have turned their second-largest city to rubble in order to avoid the escape of IS fighters to inflict harm on neighboring populations. The Lebanese and Syrian people never accepted to give up on their villages for the sake of Iraq.”

In a statement opposing Abadi's position, Ahmad al-Asadi, the spokesman for the PMU, and the secretary-general of Kata'ib Jund al-Imam affiliated with the factions loyal to the leader of the Iranian Revolution said that the transfer of fighters to the area of Bou Kamal does not pose a problem for Iraq. "IS is already present in the Bou Kamal area. The group is also present in the Iraqi desert facing Bou Kamal," he said.

Asadi added, "Iraq needs a few hours to eliminate the group there," noting that the number of IS fighters who were transferred to Bou Kamal is about 700, which is more than double the number Nasrallah has transferred.

On Aug. 30, the Karbala provincial council expressed strong objection on the Hezbollah deal to transfer the IS militants to Bou Kamal. The council considered that this action threatens the security of Karbala and Iraq in general, and called on the government to take measures to address this situation militarily and politically.

Of note, since 2003, Deir ez-Zor province has been a gathering and departure point for terrorists undertaking attacks in Iraq due to its location that facilitates terrorist movement into Iraqi cities.

In the same context, Mohammed Karbouli, a member of the parliamentary Security and Defense Committee, said that a number of IS fighters who moved to Bou Kamal "have infiltrated Rawa and Aana in Anbar province."

In another similar stance to the pro-Iranian PMU factions, three PMU factions loyal to Iran — the League of the Righteous, Iraqi Hezbollah and Saraya al-Khorasani — withdrew from the Tal Afar operations because of the participation of the US-led coalition in the liberation operations of the city. Although the Joint Operations Command denied the news in a statement published on its official website, it removed the news later without any clarification. These three factions had previously demanded that the coalition be prevented from officially taking part in the liberation of Tal Afar.

Meanwhile, other Iraqi factions loyal to Iraqi Shiite cleric Ali al-Sistani — including al-Abbas Combat Division, Imam Ali Division and Ali al-Akbar Brigade — continued to fight in the Tal Afar battles. These factions proved their commitment to the Iraqi government and did not head to Syria to fight.

They are now receiving major support from the government itself, which would make them more powerful than the factions loyal to Iran. Sistani has been calling, through his spokesman, upon all Iraqi factions and forces to distance themselves from regional projects, considering that other stakeholders, whether regional or international, are looking after their own interests, which are not necessarily in line with those of Iraq.

The different factions operating under the PMU umbrella are divided between those that are pro-Iran and those that are loyal to Iraq's national politics. With this issue becoming clearer, criticism is mounting against the pro-Iranian groups.