Dismissal of electricity minister fails to quell protests in Iraq

After a month of protests in Iraq over the lack of electricity and other public services, the Iraqi prime minister dismissed the minister of electricity, without any clear vision for a solution to the crisis. 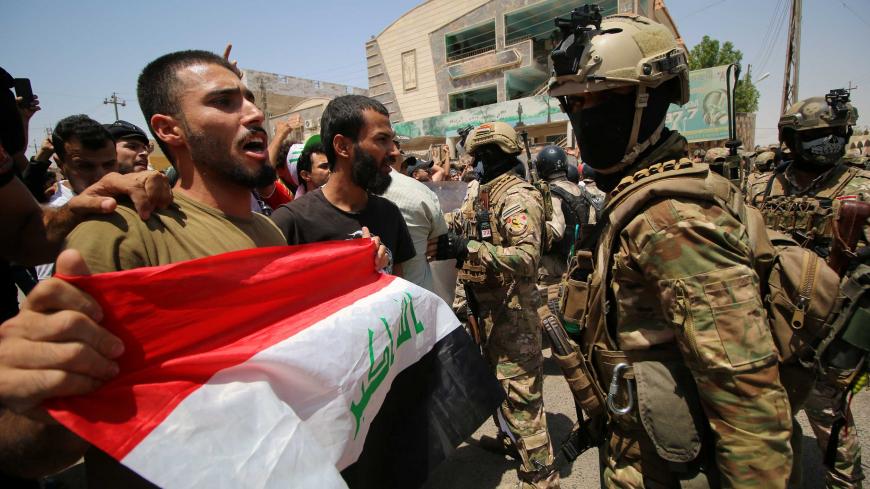 A month into the wave of protests that broke out in various cities in southern Iraq, Prime Minister Haider al-Abadi ordered on July 29 the dismissal of Minister of Electricity Qasim al-Fahdawi and referred him to investigation. He attributed this decision to the “deterioration of electricity services,” which has been behind the outbreak of protests during Iraq’s blazing hot summer.

Fahdawi welcomed the decision and called on “the senior cadres in the Ministry of Electricity to cooperate with the investigation committees toward unveiling the truth.” He said, “Reports about increasing power cuts are invalid. There may have been some cuts in the past, but the situation is getting better now.”

In this context, the question arises as to the purpose and legality of this decision at a time when the legal term of the government has come to an end and will soon be replaced by a new government. One might think that the main purpose of the decision is to try to quell the wave of protests that have taken a violent turn and have already left more than 12 dead.

However, the decision to dismiss the electricity minister did not help calm the protests, as Iraqi demonstrators in Basra province erected tents in front of the provincial council on July 31 to start a sit-in against electricity cuts and the lack of services and job opportunities amid intensive security measures. And other southern cities are still witnessing continued protests against power cuts and the lack of services and jobs.

Since 2003, there hasn’t been a minister of electricity that completed his term without resignation or dismissal, and none have met promises or solved the electricity problem.

The current crisis started when Iran cut off its electricity supplies to Iraq in the middle of the summer, leading Iraq to lose about 1,400 megawatts of power. Iraq rushed to find solutions to the crisis and started a dialogue with Iran to resume the export of electricity. However, tangible results are yet to be achieved given the shortage that Iran itself is suffering.

There have also been financial obstacles that have impeded the transfer of funds to Iran following the US exit from the nuclear deal and the new sanctions on Iran.

The Iraqi prime minister sent a special delegation led by Fahdawi and Minister of Planning Salman al-Jumaili to Saudi Arabia. The delegation arrived in Saudi Arabia on July 21 after the visit was repeatedly postponed to allow for time to prepare for some issues scheduled to be discussed during the visit.

Musaab Sari, the official spokesman for the Ministry of Electricity, announced that Saudi Arabia made a tempting offer to Iraq, one that includes the construction of a solar power plant to sell electricity to Iraq at a price lower than what Iraq now pays Iran. The offer, he added, “stipulates the construction of a plant in Saudi Arabia within one year of the signing of the agreement to produce 3,000 megawatts and supply Iraq with electricity.”

“Under this deal, Iraq will buy electricity at $21 per megawatt-hour, which is a quarter of the price Iraq pays for electricity supplies from Iran,” he said.

Of note, the Iraqi Foreign Ministry had previously revealed the existence of a road map to link Iraq to the electrical network of the Gulf states in order to permanently resolve the crisis of power outages. Therefore, the Saudi proposal would pave the way for achieving this goal in the coming stages.

Saad al-Hadithi, the spokesman for the Iraqi prime minister's office, said on July 29, that the Iraqi government delegation that recently visited Saudi Arabia had concluded agreements with the Saudi side but did not disclose any details. He only said that a mechanism has been agreed upon for the delivery of gasoline to Iraq to operate its power plants.

The dismissal of the minister of electricity, who supervised the Iraqi delegation to Saudi Arabia, came right after the announcement of the Saudi offer to Iraq. This raises questions about the existence of a link between the dismissal and the recent negotiations with Saudi Arabia.

Some press reports attributed this dismissal to Iranian pressure on Abadi because Saudi Arabia is Iran’s rival.

What’s more, there has been a verbal quarrel between Fahdawi and Iranian Ambassador Iraj Masjedi following negotiations with Iran to resume its electricity export.

When news outlet Al-Araby al-Jadeed contacted Fahdawi to ask him about the above-mentioned reports, Fahdawi said, “I have no comment. I can neither refute nor confirm such reports. That’s all I can say.”

While the minister did not reject these reports, he did not seem to want to claim responsibility for their validation.

What further confirms the published reports is that the dismissal came at a very late stage. If the dismissal was aimed at quelling the street protests, then it should have occurred at the beginning of the protests, not a month into their outbreak. Also, it seems unusual for a minister to be dismissed on grounds of corruption or incompetence four years into his coming into office and only a couple of days before his legal term was about to end.

All indicators show that the Iraqi government has no clear plan of action to overcome the electricity problem. It has no plans to address the internal production of electricity or to conclude quick and practical contracts with neighboring countries.