Iran has cut off electricity supplies to Iraq amid increased consumption during a hot spell and reports of massive accrued debt by Baghdad, sparking a wave of protests in central and southern Iraqi regions. 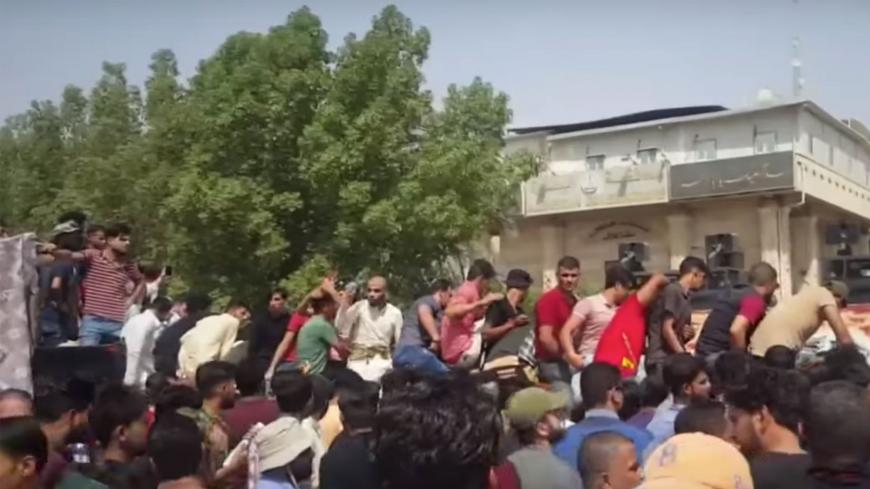 People take part in a protest over electricity cuts in Basra, Iraq, seen in a still from a video uploaded July 9, 2018. - YouTube/Alghad TV

As temperatures rise in the blazing hot summer, wide areas in Iraq’s center and south grapple with an electricity crisis that sparked a wave of protests in Basra, Dhi Qar and Diyala, among others.

During his visit to the Diyala province on July 9, Prime Minister Haider al-Abadi said that these power cuts resulted from the electricity shortage plaguing Iran, which led it to cut off its power supply to Iraq.

“The electricity crisis emerged in Iraq after Iran’s power supply lines had been cut off due to the latter’s need for electricity. This led Iraq to lose about 1,400 megawatts [MW], affecting the number of power supply hours in Diyala and other provinces,” he added.

Abadi promised that the crisis would end soon amid ongoing talks with the Iranian authority aimed at resuming Iran’s power supply.

However, Mohamed Fathi, the spokesman for the Iraqi Electricity Ministry, had announced July 8 that Iran cut off its electricity supply to Iraq due to funds owed by Baghdad.

The two reasons have seemingly had an impact on Iran's power supply to Iraq, as Iraq owes Iran a lot, and the latter is also suffering from electricity shortages in the capital and some southern cities due to increased electricity use in the summer.

Iraq has been importing between 1,500 and 2,000 MW from Iran since 2005 in a bid to cover its domestic production shortfall. Iraq needs more than 23,000 MW of electricity per hour to ensure a nonstop supply to homes and public buildings. However, it cannot produce more than 15,700 MW of electricity, hence the need to import electricity from abroad. The problem gets worse in times of extreme heat, when temperatures rise above 50 C (122 F).

Since the beginning of the week, Iraq has been witnessing a wave of protests that swept across different cities, and some of these protests have led to violence as security forces opened fire on protesters July 8 in the Karma Ali district, killing one person and wounding four others. Meanwhile, protesters in Al-Madina district, north of the province of Basra, erected tents on the highway.

The city of Kut, located in the center of Wasit province, the Suq al-Shuyukh district in the Dhi Qar province, and other areas in the provinces of Najaf and Babylon witnessed ongoing protests, some of which led to streets being blocked in the city. Protesters condemned the waste of billions of dollars on electricity-related affairs in the absence of any tangible progress, as they called for improving the electricity service. The southern province of Maysan witnessed night demonstrations, given the difficulty of handling the heat during the day as temperatures rise above 50 C.

While the Iraqi government is yet to disclose the value of the debt it owes Iran, an official at the Iraqi Electricity Ministry revealed to Al-Monitor on condition of anonymity that these debts amount to about $1 billion.

Adel Jerian, the undersecretary of the Iraqi Ministry of Electricity, mentioned in a statement to Radio al-Mirbad July 9 another reason behind the crisis. He said that the debt owed by the ministry is not new and his ministry is still paying off its debt in installments. “The problem, however, emerged because the debt repayment mechanism was obstructed in the wake of the new sanctions imposed on Iran” after the United States exited the nuclear agreement with Iran, he said. He indicated that there are ongoing negotiations between the two countries to find a new mechanism to pay those dues.

In a July 9 statement, the Iraqi Ministry of Electricity confirmed that the negotiations are ongoing with the Iranian side and noted that the Iranian electricity supply will resume soon. The statement did not clarify the proposed solutions, but the source from the Electricity Ministry said that the parties are looking for unorthodox mechanisms to have the debt settled outside the framework of global financial channels exposed to US sanctions. The debt, the source added, will be settled once the electricity crisis in Iran is over and in installments that are commensurate with the situation in Iraq.

This shows that Iran will not resume its supply within the next few days, as more time is needed to overcome the many obstacles, especially in light of the shortage witnessed in Iran.

In this vein, the question is whether the ongoing protests in Iraq will gradually subside once people deal with the new reality or whether they will degenerate into a fury that leads Iraq to a new state of instability.