The Iraqi government has pledged to provide the country with 24-hour electricity, heralding the end of years of energy blackouts, but doubts remain over the government’s ability to deliver on their promises, writes Omar al-Shaher. 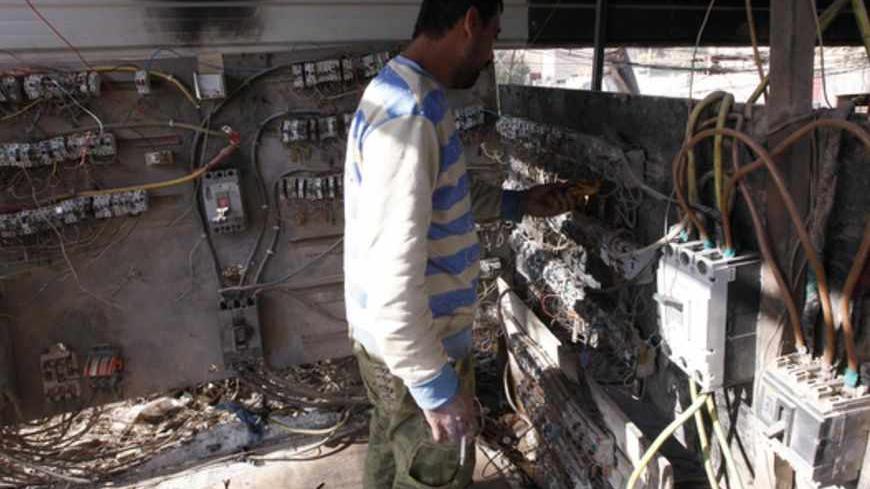 An electrician works on an electric switchboard of a local generator in Baghdad, Dec. 13, 2011. - REUTERS/Saad Shalash

As the hot weather sets in, promises to provide round-the-clock electricity are making headlines in Iraqi news programs and newspapers. This comes after the hardships Iraqis have undergone in recent years as a result of inadequacies in the electricity grid.

During the summer, when temperatures can reach 50 degrees celsius (122 degrees Fahrenheit), the electricity supply is on for less than two hours per day.

Iraq is facing a pronounced shortage in electricity due to outdated and worn-out infrastructure. The electricity sector has been depleted by wars, the economic blockade of the 1990s and heinous violence in the aftermath of Saddam Hussein’s fall, in addition to corruption that has infected the majority of governmental institutions.

During a visit to southern Basra, Minister of Electricity Karim al-Jumaili said that the electricity crisis would come to an end in October of this year. He promised that “citizens will be provided with electricity 24 hours per day.”

Jumaili pledged that the upcoming summer would be much better than the last, as new power-generating units come online.

He said, “In 2013, Iraq will generate 15,000 megawatts of power and will become energy self-sufficient. In 2015, the production will be 20,000 megawatts and will allow Iraq to export power to other countries.”

Several days ago, Jumaili affirmed that the ministry has been working on power transmission and distribution by setting up transmission stations in all provinces.

At the beginning of the month, Prime Minister Nouri al-Maliki vowed to guarantee the supply of electricity “round the clock” this year.

He added, “Yet it still is in need of more sources and contracts to provide further electricity supply, which has become the engine of public and economic life.”

As he received a delegation representing a number of Korean companies in Baghdad, Maliki said that “Iraq is looking up to the successful experiment of Korea, which was able to transform itself from a wrecked country after the Korean war to one of the most important economic and commercial industrialized countries in the world.”

However, the US Energy Information Administration, a body providing statistics and economic analysis, mentioned in a detailed report about the electricity situation in Iraq that “for most of the postwar period from 2003-2012, Iraq has struggled to meet its power needs.”

The recent report noted that “daily outages lasting 16 hours per day have not been uncommon, even though $45 billion was spent on this sector.” The report ruled out the possibility of providing 24-hour electricity as promised by the prime minister and the minister of electricity.

According to the report, Iraq plans to spend $27 billion on other projects, with about half of the money to be spent on upgrading the transmission and distribution systems.

“In 2008, Iraq purchased 74 tribunes, for a total of 10 gigawatts, yet no progress in installation was made until recently because of budgetary, contracting and political difficulties.”

by Murielle KASPRZAK and Joseph SCHMID | AFP | May 26, 2022
END_OF_DOCUMENT_TOKEN_TO_BE_REPLACED