Washington and Baghdad enter into an agreement to ensure greater transparency in the oil sector, reports Omar al-Shaher. 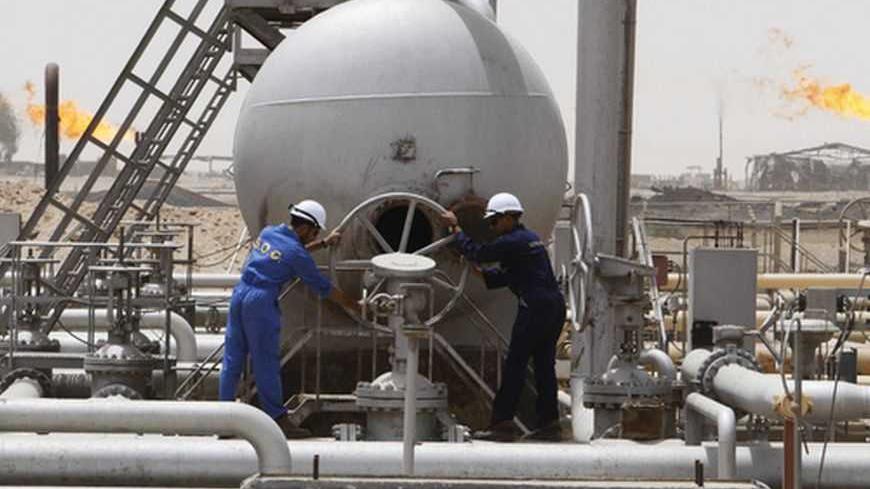 Workers of South Oil Co. (SOC) adjust a valve at the Rumaila oil field in Basra Province, May 24, 2010. - REUTERS/Atef Hassan

Amid intense criticism and corruption charges faced by the Iraqi Ministry of Oil on the part of many political parties, the US Embassy in Baghdad has signed an agreement with the Iraqi government in a bid to improve the ministry’s level of transparency.

“The United States Government, through the US Agency for International Development (USAID), signed a Memorandum of Understanding with the Iraqi Ministry of Oil on March 17. This agreement outlines US support for the ministry to improve the effectiveness and transparency of its operations,” the embassy said.

The Ministry of Oil has been accused of mismanaging the oil sector, as exemplified by higher production and export rates. Additionally, most of the oil facilities lack the flow-meter system that measures the amount of exported crude oil. They still rely on the draft survey, i.e., the manual measurement of oil quantities. Iraqi experts and MPs say this ends up being extremely costly for Iraq.

The ministry is run by veteran oil engineer Abdul Karim Luaibi, but according to some Iraqi economists, the real controller of Iraqi oil policy is the Deputy Prime Minister for Energy Affairs Hussain al-Shahristani, an atomic expert who is very close to Prime Minister Nouri al-Maliki.

According to a member of the parliamentary energy commission, Uday Awad, “The Iraqi Parliament does not know anything about the nature of the Ministry of Oil’s work or the contracts it signs.” He added that “the reports about the ministry’s performance only partially reach the parliament and its energy commission, pointing to the presence of corruption within the ministry.”

The agreement provides for the improvement of cooperation regarding Iraqi oil institutions between Baghdad and Washington, in order to provide support for the Ministry of Oil through an administrative reform project (Tarabot) funded by the USAID. This project functions in accordance with the principles of the Strategic Framework Agreement signed between the US and Iraq.

The US embassy said, "The Tarabot project will help the ministry enhance current service delivery and transparency to better meet the needs of the Iraqi people, including improving procurement practices and implementing the new Iraq Development Management System — state-of-the-art software used to manage the ministry’s capital investment budget.”

The Iraqi Oil Ministry had announced earlier this month that it sought to set up a system of electronic counters to measure the amount of oil exported via three floating platforms in Iraqi waters, after it confirmed that the export operations across the platforms currently rely on the draft survey.

Ammar Alaidany, an official at the ministry, confirmed that Iraq has three new floating platforms to export crude oil — Marbad, Jikor and al-Faihaa — two of which are operational, while the third has not been used yet. He added that “exports from the floating platforms rely on the draft survey in measuring oil quantities, because setting up an electronic flow-meter system for the platforms has not been completed yet.”

“The first quarter of 2014 will witness the completion of equipping and setting up a floating platform for [oil] measurement equipment, which will be dedicated to the floating export platforms,” Alaidany said. He believes that although primitive, the draft survey is a common and international oil-measurement method, upon which many oil-producing countries rely, including Arab countries.

MP Noura al-Bajari, a member of the Parliamentary Economic and Investment Commission, has accused Iraq’s oil sector administration of “hindering the application [process] of Arab and foreign investors willing to invest their money in oil refining.

“Although the law for private investment in crude-oil refinement was passed in 2007, the Oil Ministry has not granted investors any license, save for three approvals that never went into effect, due to obstacles added to the existing unrealistic conditions that the investing company must meet,” she said.

Bajari also said she believes that “legislators were wrong to entrust the Oil Ministry with the supervisory task and setting conditions.

“It would have been  better to entrust the Investment Authority, which can seek help from oil experts with this task, and to entrust the Oil Ministry with supervising the activities of the selected companies after the completion of the project,” she said.

Ahmed Shamma, director of refineries at the Iraqi Oil Ministry, said his country is holding talks with companies willing to invest in local refineries.

“There are five large refineries for short and long-term investment. We have also prepared their complete designs, which are sophisticated and offer products with modern specifications," he said.

“These investments will be part of a private Iraqi-foreign partnership,” Shamma said. “The most important investment-licensing conditions in these refineries is to achieve an employment rate for Iraqis of no less than 75% .”

Former Iraqi Oil Minister Issam al-Jalabi said, “Although Iraq is an oil-rich country, it still imports petroleum products from abroad to meet its needs, 10 years after the US-led invasion of the country in 2003.

“Iraq’s import rate for oil derivatives reached $6 billion in the few years following the US-led invasion,” Jalabi said. "The total spent by Iraqi governments on the import of petroleum and gas derivatives during the past 10 years is $30 billion.

“These sums were enough to establish at least five giant refineries in Iraq," he said. "Yet, no new refineries were set up, while the government continues to sign contracts with companies to import these derivatives. In addition, there are no plans to build new refineries, which means that Iraq will remain a petroleum-importing country in the next decade.”

Omar al-Shaher is a contributor to Al-Monitor’s Iraq Pulse. His writing has appeared in a wide range of publications including France’s LeMonde, the Iraq's Alesbuyia magazine, Egypt’s Al-Ahaly and the Elaph website. He previously worked for Al-Madacovering political and security affairs and as a correspondent for the Kuwaiti Awan newspaper in Baghdad.