An initiative to compel the Iranian government to start hiring younger staff for managerial positions appears to be gaining steam. 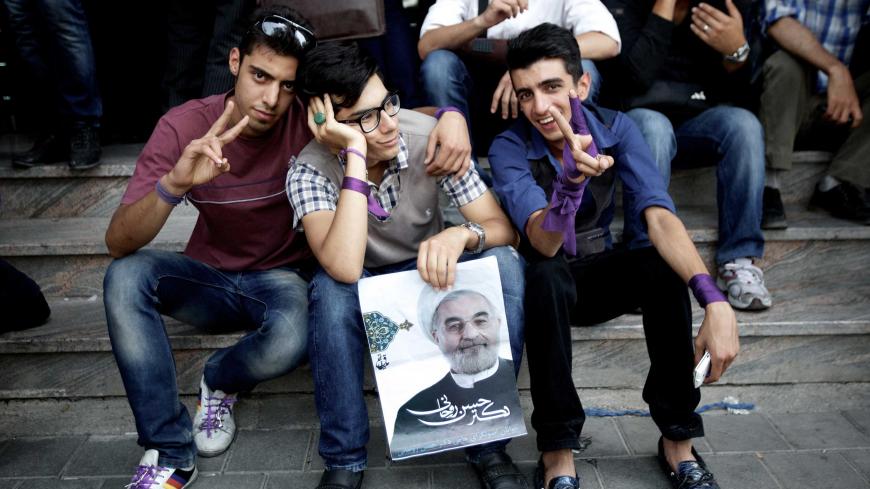 Young Iranians hold a portrait of Hassan Rouhani as they wait for the final results of the presidential elections in downtown Tehran, Iran, June 15, 2013. - BEHROUZ MEHRI/AFP/Getty Images

With a population of over 81 million, Iran is the second-most populous country in the region and ranks 18th in the world. As the results of the country’s latest census in March 2017 indicate, the average age in Iran is 31.1, while published figures show that half of Iranians are under the age of 30.

Following the post-revolutionary population boom in the 1980s and the Islamic Republic’s unpreparedness to meet the various demands of the vast number of young people, Iranian millennials have been experiencing all sorts of challenges in recent years. The lower rate of marriage, an increase in divorces and growing drug addiction all can be seen as rooted in one common issue: unemployment.

Over the past decade, creating new jobs and relying more on Iran’s young generation in management of the country have been among the main promises that politicians from across the political spectrum have made. This point was brought to the forefront once again after President Hassan Rouhani promised to choose executive officials from the younger generation after his re-election in 2017. Also, a law was passed in April 2016 under which — with some exceptions for high executive posts — re-employment of retirees in executive positions was banned.

However, due to many exceptions that had been made in the law, many retirees continued to hold top-tier managerial positions. As a result, parliament members recently voted to amend the law, this time by further shortening the exceptions to force the government to hire senior managers from the younger generation of Iranians.

Although the legislation still does not apply to the heads of the three branches of government, vice presidents, deputy speakers of parliament, members of the Guardian Council, ministers and legislators, positions such as governors, deputy governors, ambassadors and deputy ministers will no longer be exempted from this law. Based on published reports, 17 governors, about 80 deputy governors and 1,200 retired managers who have been re-employed must be dismissed within 60 days — if the bill is approved by the Guardian Council in coming days.

To deliver on one of his campaign promises, Rouhani appointed 35-year-old Mohammad Javad Azari Jahromi as minister of information and communications technology in 2017. The young minister is now viewed as the symbol of the transparency drive in the country and is the only official from the first generation of Iranians born after the Islamic Revolution in 1979 to serve as a Cabinet minister so far. However, despite this appointment, the average age of Rouhani’s government is still 62, and many Iranians have blamed the country’s worsening economic and social situation on aging ministers who neither have the energy nor the knowledge to face the fast developing challenges of the country.

Although the bill was ultimately passed by parliament despite intense resistance and lobbying against it in some quarters, the role of some public movements such as “Our Generation,” which is comprised of experts born from the 1970s onward, can’t be ignored. To learn more about this group of young Iranians who played an active role on social media (using the #Our_Generation hashtag both in English and Persian) and through lobbying in their drive to pass the law against the re-employment of retirees, Al-Monitor spoke with Shahram Ejtehadi, a young adviser to Minister of Roads and Urban Development Abbas Akhoundi, who is among the main activists of the Our Generation movement.

“As a result of the events we’ve witnessed over the past two decades, this generation has reached maturity and we’re no longer seeing them as a generation that is full of excitement,” Ejtehadi said. “Today, we’re witnessing the consequences of people’s decisions. We have prepared a list of all competency indices that our generation has, and we’re going to have exclusive training and personal development programs for every competent individual of our movement so that they can play a role in the sustainable development of the country,” he added.

Although the new law could be a game-changer for many young Iranians who have lost hope, many remain worried that a new generation of top managers will be chosen from those with “good genes,” whose main competency and advantage is being the offspring of elites. To address this concern, Ejtehadi stressed that the Our Generation movement is pushing for Iran to benefit from “the young Iranians who have the competency in various fields of planning and strategy to save the country from its current challenges and turn the threats to opportunities for the development of the country.” He added, “We’ve developed various regimes, including recruitment, development, truth finding, transparency, elimination, etc. We also have an ethical protocol that includes honesty in words and deeds.”

When asked about the main difference between the next generation of Iranian managers that the movement will be supporting and promoting, Ejtehadi told Al-Monitor that its members will have two main characteristics that distinguish them from others: “One is that they’re not dependent on [past and present] political, economic and social icons of the country, which makes them wholly independent individuals who are only relying on their own expertise. … Second, our approach will be inclusive and will include anyone from any political side as long as they believe in the framework of national interests and citizens’ rights.”

While some argue that the country could face even further challenges if seasoned managers are replaced with younger people who might not have enough experience to deal with difficult situations, many others posit that the younger generation must be trusted and be given more room to show its capabilities and competencies — just as they were given the chance following the Islamic Revolution nearly 40 years ago. With many officials of the Islamic Republic now in their 60s or 70s, it is fair to say that the time for their retirement, and replacement with the younger generation who are highly educated and can better reflect the viewpoints of their generation and the challenges the country is facing, has finally come.