Half a year away from Iran’s presidential election, the country’s hard-liners are already hard at work to ensure the next president is on their side. 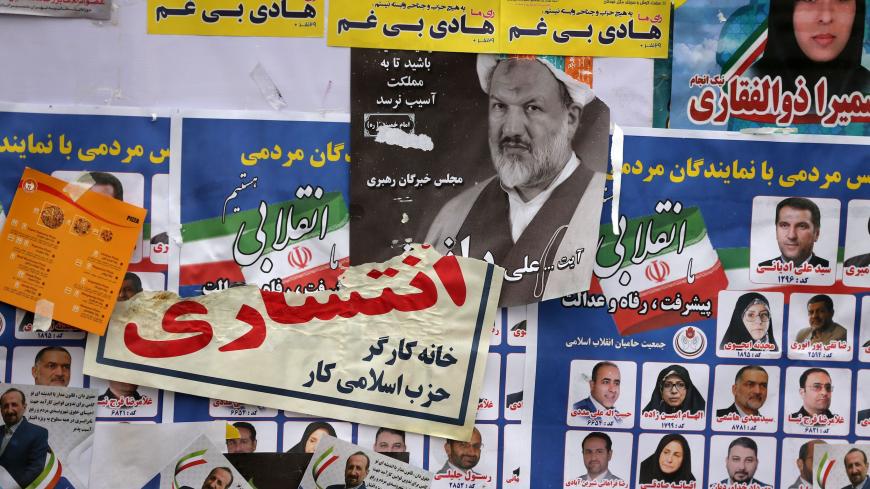 Iranian electoral posters and fliers are pictured on the last day of election campaign in Tehran on Feb. 19, 2020. - ATTA KENARE/AFP via Getty Images

The conservative camp, largely affiliated with the powerful Islamic Revolutionary Guard Corps (IRGC), is already in full control of the judiciary and parliament. While each side has long lists of candidates vying for presidency, the conservative camp seems to be particularly exerting itself to minimize the chances of its rivals.

Earlier in November, the hard-line parliament passed controversial amendments to Iran's electoral law, setting an age limit that effectively quashed the chances of young moderate Minister of Communications and Information Technology Mohammad Javad Azari Jahromi. Under the new law, candidates must be above 40 years of age to run.

Jahromi, the only Iranian minister born after the Islamic Revolution, had been a promising candidate for the Moderate-Reformist camp. Defying stereotypes and depicting himself as a champion against corruption, the 39-year-old minister has been actively engaged with the younger generation through social media.

Although Jahromi has declared he has “no plans” to run, Iran’s media and political activists continue to see him as a candidate for the presidency. The minister has remained mute on the new age limit and other amendments.

It was not clear if the age requirement was specifically aimed at Jahromi, but conservative parliamentarian Malek Shariati, who voted for the legislation, hinted as much without naming him. He said that the parliament “should not sacrifice the country’s interests for the sake of one or a few individuals who might be planning to run for president.”

Still, some hard-liners support their own young candidates. In a Nov. 24 editorial, IRGC-affiliated newspaper Javan criticized the Reformists for trying to repeat the past by bringing old political figures into the race. The paper called for a “circulation of the elites” to allow for an innovative younger generation of officials to replace the aging managers whose “old strategies could just thrust us back into the past.”

The new law is also widely viewed as further restricting people’s role in the election process while granting even more power to the Guardian Council, a 12-member supervising body effectively controlled by Supreme Leader Ayatollah Ali Khamenei. The hard-line council has been in charge of the vetting process of candidates in past elections, and has remained heedless of criticism over its merciless, partisan purge of rivals.

One contentious section of the new law is the inclusion of the IRGC intelligence organization in the vetting process. It will assist the Guardian Council with background checks, raising concerns that candidates with no IRGC connections could be denied the chance to run. Ahmad Naderi, a lawmaker representing Tehran, is one of the few who opposed the legislation as an attempt at “election engineering.” And in a critical editorial, pro-Reform Etemad attacked parliament speaker Mohammad Bagher Ghalibaf and the parliament under his control of “taking aim at the democratic essence of the Islamic Republic.”

Reformists also fear a hard-liner push for a president rising directly from the IRGC, a military general heading the executive for the first time in the history of the Islamic Republic. Numerous former commanders are reportedly eyeing the presidency, among them Ghalibaf and Mohsen Rezaee. On Nov. 24, Hossein Dehghan, a former defense minister and current military adviser to Khamenei, became the first candidate to officially announce his bid.

While hard-liners argue that a military commander could be the country’s salvation, critics contend that it could deal a severe blow to Iran's already fragile democracy.

“A president in uniform will only be a repeat of military [dictatorships] in Pakistan and Turkey and implies a scarcity of veteran political personalities in Iran,” said prominent and outspoken Reformist figure Ali Motahari, who also predicted that the generals will find slim backing among the public.