In an effort to introduce Egypt's famous figures to the next generation, 100 signs now mark where celebrated Egyptians like Nobel laureate Naguib Mahfouz or diva Umm Kulthum once lived. 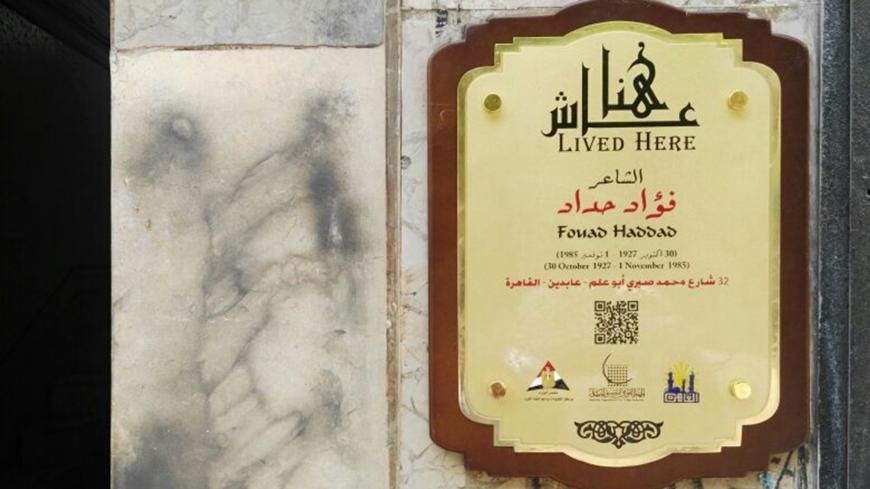 CAIRO — In an effort to pay homage to Egypt’s cultural icons and to introduce them to future generations, an Egyptian initiative has installed 100 signs throughout Egyptian cities marking the former homes of such legends as Nobel laureate Naguib Mahfouz, former UN Secretary General Boutros Boutros-Ghali and singer Umm Kulthum.

The National Organization for Urban Harmony (NOUH) and the Ministry of Culture started working on the initiative, called “Lived Here,” to mark the homes of Egypt's iconic figures in arts, literature, politics and science two years ago. The project got off to a slow start when both NOUH and the ministry went through administrative changes, but in February 2018, NOUH finally designed and installed 70 signs for 70 prominent Egyptian figures outside their one-time residences. The signs include a brief description of the figure's work, achievements and life.

As of this summer, 100 signs can be found around Cairo, Alexandria and several other cities, and Egyptians have taken notice. Social media platforms are full of photos of and selfies with the signs, and newspapers have praised the initiative.

The chairman of NOUH, Mohamed Abou Saeda, told Al-Monitor that the idea started as part of the Street Story Project to protect Egypt's architectural heritage from demolition. The project sought to install signs detailing each street’s history as well as information about prominent past residents.

In the course of its research, NOUH found that dozens of historical figures had lived on such streets. The group decided to create a new initiative that would focus on the individual buildings. The first phase of the project was carried out in Cairo, and then it spread to Alexandria and other cities.

Abou Saeda said each sign contains a QR code that visitors can scan with their smartphones to “access a large database prepared by NOUH and includes accurate and comprehensive details about the famous figure who lived there.”

He added that the first 100 signs are just the beginning and there will eventually be signs for thousands of prominent Egyptian figures.

​Talking to Al-Monitor about the initiative and its success, Moataza Abdel Sabour, the daughter of prominent Egyptian poet Salah Abdel Sabour, expressed her happiness about the sign posted at the entrance of their house, beneath the balcony where her father used to sit to write poetry and host notable guests from around Egypt and the Arab world.

The initiative has also shed light on some lesser known figures of the Egyptian intellectual world, such as children's literature author Abdel Tawab Youssef. Writing for al-Ahram newspaper, journalist Othman Fikri said a sign placed near the house of Youssef has brought the neglected writer once more to the attention of the public.

“Those signs, including the associated database, will contribute to the protection of the history of many of these historical figures and will keep them alive in the memory and conscience of the Egyptian people," Fikri told Al-Monitor.

Director General of Research and Studies at the Ministry of State of Antiquities Abdel Rahim Rehan expressed hope that the initiative could encourage new generations of Egyptians to read more classical writers. “This initiative will engage future generations who lack interest in reading and are not very fond of the Egyptian cinematic and musical heritage,” he told Al-Monitor. “The young generations can learn about these figures through their smartphones, which have become an integral part of their daily lives. This is how they will get to know the greatness of their country's history, culture and arts.”

Rehan called on NOUH to hold conferences and celebrations that feature the work of the figures in their former homes, saying such activities could turn these buildings into cultural and artistic shrines. He also urged NOUH to transform the buildings and their contents into museums that could be open to tourists from all over the world.

Tarek El Shennawy, a professor of art criticism at the Cairo Higher Institute of Cinema, told Al-Monitor, “This initiative has already been implemented in France, where streets are named after the French figures who once lived on them. In France, some streets are also temporarily named after contemporary figures such as World Cup champions. It is also found in Britain, exactly the same way as in Egypt.”

Shennawy also believes that NOUH’s initiative will help enrich Egyptians' cultural knowledge. “For example, the prominent film critic Samir Farid, for whom NOUH allocated a sign, is known only to filmmakers,” he said. “It will be great when young people use their phones to scan the sign and get to know the achievements of Samir Farid, an internationally renowned critic [who is unknown to] Egyptians.”