Southeastern Turkey's epic ruins of Gobeklitepe, possibly the world's first temple, has finally made it to UNESCO'S World Heritage List. 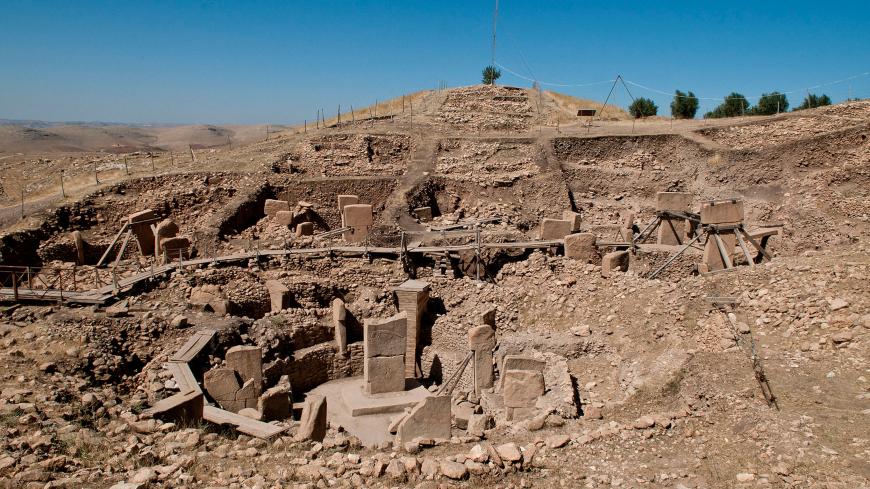 The archaeological site of Gobeklitepe lies about 10 miles from the bustling city of Sanliurfa in southeast Turkey. “Potbelly Hill” is a round, 15-meter (49-foot) mound containing more than a dozen oval-shaped walled enclosures and about 200 enormous stone-capped pillars. They are the oldest megalithic structures ever found, dating to the 10th millennium B.C. and predate by thousands of years both Stonehenge and Carnac's menhirs.

So it should hardly come as a surprise that UNESCO decided to formally recognize Gobeklitepe’s place in human history and added it to the World Heritage List on June 1, at the 42nd meeting of the UNESCO World Heritage Committee in Manama, Bahrain. It is Turkey's 18th cultural site on the list, which includes Ephesus, the Hittite Capital of Hattusa and Nimrud Mountain.

The Paris-based cultural agency of the United Nations is running a program on prehistory called HEADS, whose mission is to promote the study and protection of vulnerable ancient sites such as Gobeklitepe.

“We were all amazed by this unique site and by the fact that its discovery is only very recent; in essence, its nature remains a mystery despite the hard work of the archaeologists,” Mechtild Rossler, director of UNESCO’s World Heritage Center, told Al-Monitor in a written interview.

With its pillars up to 6 meters (20 feet) tall and weighing up to 20 tons, Gobeklitepe required an enormous afflux of manpower to cut the limestone and build the structure. But the site was not a settlement, as people did not live there on a permanent basis. Its purposes seem to have been exclusively ritualistic. Some believe it was the first temple in history.

The debate is still open, but the prevailing interpretation is that the T-shaped pillars and the many animals delicately carved into them — boars, birds, foxes, lions, scorpions, snakes and vultures — are totemic, perhaps ancestral figures.

In the enclosures, founding myths underlining common origins were probably narrated through symbols and naturalistic images. It may have been something completely new at this early stage of human evolution, when hunter-gatherers had yet to discover agriculture and to settle in cities.

German archaeologist Klaus Schmidt was the first to recognize its extraordinary archaeological potential in 1994. Since then, the German Archaeological Institute conducts annual excavations and contributes to the management of the site. More recently, the research team created a blog to offer some basic facts, to correct misunderstandings and oversimplifications ("No, Gobeklitepe was not the Garden of Eden"), and to present new discoveries to the general public.

Cooperation on an epic scale was the secret of ancient Gobeklitepe, and it still is today. Its inclusion on the World Heritage List is the result of at least five years of work, which brought together public and private actors in Turkey, as well as German and Turkish archaeologists. Turkey’s Ministry of Culture and Tourism, the municipality of Sanliurfa, the Karacadag Development Agency and determined members of the private sector all lobbied for Gobeklitepe to be added to the permanent list.

Even before being recognized by UNESCO, Gobeklitepe was on its way to becoming a world-class tourist destination. It was visited by more than 45,000 people in 2014 before a bomb attack in 2015. Today, there are many ongoing efforts to boost cultural tourism to this site and its still chronically underdeveloped region.

In 2014, the ONE association chaired by Demet Sabanci Cetindogan was the first to support Gobeklitepe's candidacy for UNESCO's list through promotional activities in Istanbul and in Paris. It met foreign and Turkish journalists and took them to the site, and organized receptions and lectures to explain to the diplomatic corps in Turkey and UNESCO functionaries why it is such a special place.

Two years later, the Dogus Group signed a support contract with the Turkish government and became the official sponsor of Gobeklitepe. Dogus has committed $15 million over 20 years to advertise Gobeklitepe worldwide, to finance excavations, scientific research and conservation programs, and to help build infrastructures for tourists. The group has worked with the German archaeological mission and Turkish authorities on drafting the management plan required by UNESCO.

Dogus’ initiative was officially launched in 2016 at the World Economic Forum in Davos with a lavish gala event. The first efforts focused on the construction of a visitor center with basic facilities and a multimedia exhibition prepared by Kreatif Architects. Its visual, quiet design introduces Gobeklitepe and its history while respecting the stillness of the place.

The European Union is also involved in developing the archaeological site. A project called “Revitalization of History in Sanliurfa,” managed by the Karacadag Development Agency, is investing in cultural tourism as an economic lever for the whole region. Out of a budget of more than $10 million, $3 million was allocated to build shelters for the long-term preservation of the structures in Gobeklitepe and a walkway to guide people around the site. In the recently opened Sanliurfa Archaeological Museum, Gobeklitepe and its findings are given prominent visibility with a replica visitors can enter and explore.