A 12,000-year-old Stone Age temple discovered in southern Turkey is challenging conventional views on the rise of civilization. 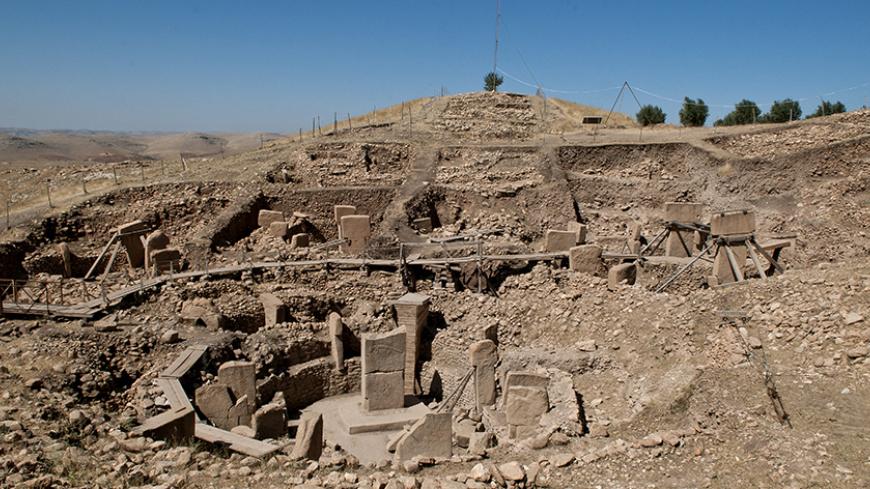 The ancient ruins of Gobeklitepe are reputedly some of the oldest man-made structures on earth, located just north of Sanliurfa, near the Turkish-Syrian border, Sept. 6, 2011. - Wikimedia Commons/Teomancimit

The ancient city of Ephesus and the Diyarbakir Fortress and its surrounding Hevsel Gardens have become the latest historical sites in Turkey to be inscribed on the UNESCO World Heritage List in July. Turkey’s next nomination is the Stone Age cult site of Gobeklitepe, located in Sanliurfa province not far from the turbulent Syrian border.

The site’s discovery began with a coincidence reminiscent of a movie plot. In 1983, local farmer Mahmut Kilic found a carved stone while plowing his field in the village of Orencik. He took it to the Sanliurfa Museum, where it was to wait a decade for someone to recognize its importance. Visiting the museum in 1993, German archaeologist Klaus Schmidt conducted tests on the stone, marking the beginning of a journey that took him 12 millennia back in history.

In a written response to Al-Monitor’s questions, Gokhan Bozkurtlar, director-general for cultural heritage and museums at the Turkish Culture and Tourism Ministry, explained that a joint team from Istanbul University and the University of Chicago conducted the first archaeological work at the site in 1963. The surveys, however, remained limited to the surface. The real work began in 1995 with a joint effort by the German Archaeological Institute and the Sanliurfa Museum. In 2007, the Turkish government gave the green light for excavations, with Schmidt at the helm of the team. By 2011, the site was already on UNESCO’s tentative list, an inventory of prospective nominations to the World Heritage List, following startling discoveries that pin it as the world’s oldest temple center.

Four layers have been identified at Gobeklitepe. According to the director of the Sanliurfa Museum, Muslum Ercan, the top layer consists of agricultural surface backfill, while the other three layers have been dated to the Pre-Pottery Neolithic period. He believes at least 20 other monumental structures await excavation at the site.

What has been discovered so far at Gobeklitepe?

An information sheet the Culture and Tourism Ministry provided to Al-Monitor contains the following information: “Two 5-meter-tall [16 feet], T-shaped limestone pillars stand encircled by 20 round and oval structures of up to 30 meters [98 feet] in diameter. In the interior walls of those structures, there are smaller pillars. The scientific data from Gobeklitepe contains major findings that require a re-evaluation of the theoretical framework and datings in archaeological studies of the Neolithic period. Based on Gobeklitepe’s location and size, the carbon-dating performed there and the monumental character of the structures, it is understood that the area is a unique Neolithic cult site. The area, which remained untouched for 12,000 years in its natural environment, has provided significant archaeological findings.”

The pillars at the site feature carvings of animals — scorpions, foxes, snakes, boars, lions, cranes and mallards — as well as plants and abstract symbols. The temple predates Stonehenge by 7,000 years, the Egyptian pyramids by 7,500 years and the first Mesopotamian cities by 5,500 years.

In a documentary shot before his death in July 2014, Schmidt said, “It’s not a normal settlement site as the sites we know from this period, like Cayonu and Nevali Cori in Turkey or Mureybet in Jerf el-Ahmar in Syria. These are settlement sites, but here it’s very different. We have here mainly installations which have not been used for domestic life. It’s clear they’ve been used for ritual purposes, for religious [purposes]. … So this site consists mainly of Stone Age temples. … It was not hidden in the valley or in the plains, but on top of the highest mountain here, visible from all sides.”

The veteran archaeologist went on to describe how the findings astonished the team. “We didn’t expect such a developed architecture in the context of late hunter-gatherer societies. Hunter-gatherer societies dominated human history in the Old Stone Age. … Farming was not invented,” he said. “The common idea was that from very primitive beginnings, the civilized way of life developed here in the Near East with settled societies, and now we understand that it’s much more complicated.”

The main raw material for the tools of the builders was flint, which is very common in the region, Schmidt explained. The preservation of the structures was “fantastic,” he said, because the site was backfilled and buried deliberately during Stone Age times, using hundreds of cubic meters of material.

One of the temples, which the excavation team calls Temple D, is particularly striking in terms of the symbols carved on it. “Here we have a very, very interesting sequence of motifs, which are in a vertical row and which are much more than just a decoration,” Schmidt said. “This sequence of motifs is reminding us of the Egyptian hieroglyphs. It’s clear we don’t have writing here, but we have symbols which we can understand partially. We have here snakes, for example, it’s clear. But here we have an H-shaped sign, and we don’t know the meaning of this symbol.”

Retired ambassador Numan Hazar, Turkey’s former permanent representative at UNESCO, said it’s now beyond doubt that Gobeklitepe is the world’s oldest human-built site and cult center, stressing that many other civilizations remain to be discovered in Anatolia.

Speaking to Al-Monitor, Hazar said only 15 sites on the World Heritage List was too few for Turkey. “We have hundreds of monuments that can make it to the list. Anywhere you dig in Turkey, including the Istanbul subway, history emerges underneath,” he said. “From Hittites and Romans to Byzantines and Seljuks, many peoples have left countless traces in Anatolia, a cradle of civilizations. Catalhoyuk, for instance, figures in every book on the rise and development of humankind. All those monuments will have a positive impact on the international community vis-a-vis Turkey.”

Turkey’s business community is also backing efforts to inscribe Gobeklitepe on the World Heritage List. The ONE Association, backed by prominent businesspeople, joined hands with the Culture and Tourism Ministry in January for a conference at the UNESCO headquarters in Paris, “The Birth of Religion and Rise of Civilization: Gobeklitepe Neolithic Site.” The association’s chairwoman, Demet Sabanci, pledged that from now on the Turkish private sector would invest in the preservation of cultural heritage, while prominent Turkish historian Ilber Ortayli described Anatolia as the “world’s biggest open-air museum.” The undersecretary of the Culture and Tourism Ministry, Haluk Dursun, said the excavations at Gobeklitepe would continue, stressing that the findings were important enough to upend conventional concepts in the field.

Cihat Kurkcuoglu, a history scholar at Sanliurfa’s Harran University, believes tourists will soon flood Gobeklitepe. “For Turkey, Gobeklitepe is what the pyramids are for Egypt. I’m convinced it will soon make it to the UNESCO World Heritage List,” he said. “Millions of people will be coming here to see the place. Planes from all over the world will be taking off exclusively to Gobeklitepe.”

by Murielle KASPRZAK and Joseph SCHMID | AFP | May 26, 2022
END_OF_DOCUMENT_TOKEN_TO_BE_REPLACED