Russia zeroes in on returning Christians to Syrian homes

Moscow is playing up the plight of displaced Christians to encourage Western states to contribute to Syria's reconstruction. 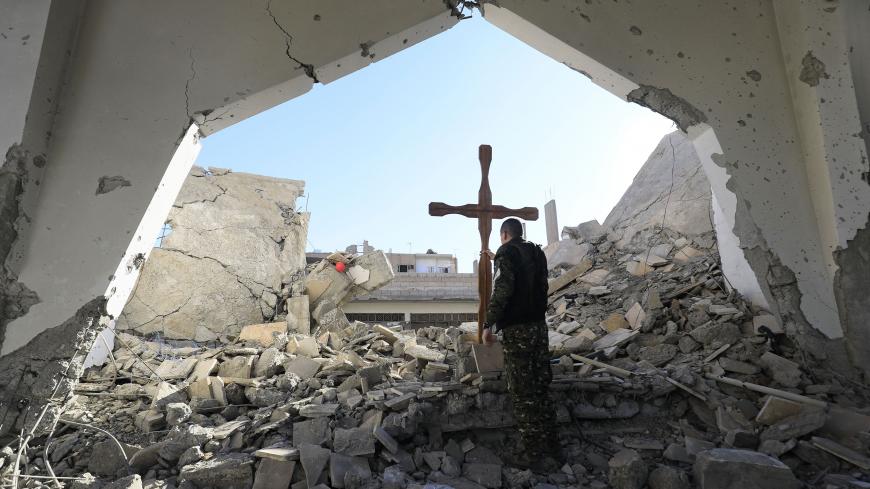 A member of the Syrian Arab-Kurdish forces places a cross in the rubble ahead of a Christmas celebration at the heavily damaged Armenian Catholic Church of the Martyrs in Raqqa, Syria, Dec. 26, 2017. - DELIL SOULEIMAN/AFP/Getty Images

During their recent meeting in Helsinki, the US and Russian presidents supposedly reached several agreements on Syria, which were taken into account in a list of suggestions later sent to the American side. Lt. Gen. Mikhail Mizintsev, chief of the National Center for State Defense Control, said these suggestions involve returning refugees to their original homes, joint monitoring and rebuilding infrastructure. Yet the areas of Syria where the United States is supposed to do its part were never mentioned, and the United States has been mum on the subject. The general pointed out that, according to Moscow’s estimates, about 1.7 million Syrian refugees may return to their homes soon.

At the same time, Russia created an inter-institutional coordination group on refugee return that includes military officers and diplomats. Russia's Foreign Ministry, in turn, made inquiries to 45 embassies of the countries that, according to the UN, are currently hosting Syrian refugees, to understand how many of them are scattered around the world.

The United States has opposed keeping Syrian President Bashar al-Assad in power. However, a mass return of refugees to Syria will demonstrate — first and foremost — the regime’s stability.

At the same time, Russia and the West are already coordinating their efforts to return refugees home and even to start the reconstruction process. For instance, the Russian Orthodox Church and Roman Catholics are restoring Christian churches and monasteries across the country.

The restoration of the Maaloula convent is nearing completion with the hope that its displaced nuns will be able to return, according to Hilarion Alfeyev, metropolitan (head bishop) of Volokolamsk and chairman of the Department for External Church Relations of the Patriarchate of Moscow. During the recent visit of UN Secretary-General Antonio Guterres to Russia, Patriarch Kirill of Moscow and All Russia emphasized the significance of efforts to return Christians to Syria, Lebanon and Iraq.

Up to a point, Moscow has touted the idea of protecting Christians for domestic consumption. Christianity is the largest religion in the country; as much as 75% of the population identify as Christian, mainly Russian Orthodox.

Yet once it became clear that the course of the war had tilted toward the Assad regime, Russia began actively voicing the importance of protecting Christians in its foreign relations. In her June address to the Greek parliament, Irina Yarovaya, vice speaker of the Russian Duma, said Russia is fighting terrorists in Syria not to protect its own interests, but to defend Orthodox Christianity. Yarovaya is best known for proposing a package of anti-terrorist laws (which were later approved) that expanded the government’s authority, tightened control over Russian citizens and limited their rights guaranteed by the constitution.

Sadly, it's not really surprising that those laws, broadly deemed repressive, appeal to Christians in Syria. Assad’s autocratic regime has managed to pose consistently as a shield for the Christian minority there for more than seven years, presenting the conflict as offering one of only two outcomes for Christians: Choose the secular government in Damascus or face Islamist “terrorists.”

It’s still debated who exactly proposed popular sectarian slogans such as “Christians to Beirut, Alawites to the grave” during the anti-government protests in 2011. The regime sees the slogan as proof of a foreign conspiracy. The opposition insists these slogans were coined and promoted by Syrian security services as an effort to defame dissenters and expose a terrorist nature of the revolution. The government’s propaganda has been proven right, in a way, in that the majority of Christians, trying to remain neutral and suffering violent attacks from the Islamic State and other radical groups that had infiltrated the opposition, supported the secular regime. Some Christians are also represented in secular factions of the opposition, such as George Sabra and Abdelahad Astepho of the Syrian National Council; others are members of the Syrian Democratic Forces; still others have had acceptable relations with militants in the southwest. However, by playing the Christian card for its own benefit, the regime managed to maintain the loyalty of the communities and its contact with Western representatives who, despite the policy of isolating Damascus, have been directly expressing their solidarity with Syrian people as a whole, including Christians.

In modern Russia, it's important to pursue an ideology as a critical factor in foreign policy decision-making and as a landmark to distinguish between the present and the Soviet past.

In describing his vision for the country, Putin once called Russia a multiethnic civilization assembled around a Russian cultural core. In this respect, since the start of the Syrian conflict, Moscow has consistently promoted the idea of protecting Christians and the vision of Syria as a cradle of Orthodox Christian doctrine and asceticism. Above all, however, Moscow protected Assad’s regime and has removed its responsibility for cease-fire violations so it can act from a position of force.

Russian internet resources centered on problems of religion, as well as other experts, have extensively pondered an alleged plan whereby enemies of Syria are trying to turn the situation into a religious conflict. They also predicted that should the governmental system collapse, Christians would be the first to fall prey to anarchy. As proof, experts provided the following numbers: Before the Syrian civil war started in 2011, some 1.75 million Syrians (about 10%) were Christian. However, according to Elena Agapova, deputy head of the Imperial Orthodox Palestine Society, official sources say the Christian community of Syria was halved. Other estimates say Christians now amount to less than 1% of the country’s population.

The estimates ignore that Christians had left Syria in waves even before the conflict, due to numerous problems — not only the decline of secular movements caused by the regime’s support of popular Islam for its own benefit in internal and foreign policy, but also due to the war in Iraq, the rise of fundamentalism in general, and failed attempts at social and economic development.

Damascus, which publicly guarantees the rights of Christians and other religious minorities, is likely to start relying on the refugee factor more intensively. As for the countries hosting Syrian refugees, Assad will probably push for their participation in the reconstruction. However, it's still not clear whether Syrian Christians actually want to return to their war-torn homeland. The radical factions have gone underground, but they will still try to use religion to their benefit in some way, and Iranian influence is increasing throughout the country’s system.