In the wake of Helsinki summit, there are signs of a growing chasm between President Donald Trump and his Cabinet chiefs trying to implement US policies toward the Middle East. 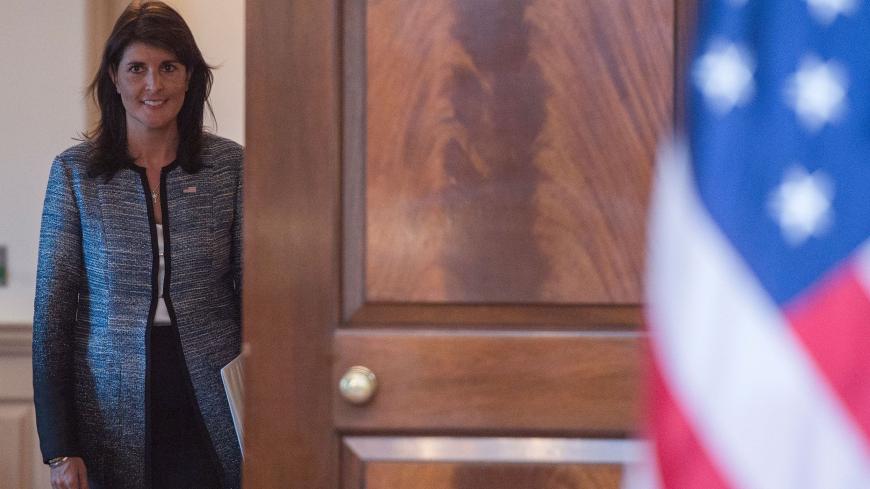 US Ambassador to the United Nation Nikki Haley arrives at a press conference at the US Department of State in Washington, June 19, 2018. - GETTY/Andrew Caballero-Reynolds

WASHINGTON — When US Ambassador to the United Nations Nikki Haley took to the podium at the conservative Heritage Foundation on Wednesday to discuss US promotion of human rights, there was no nod to the cognitive dissonance when she proclaimed it her duty as an American to advocate for traumatized women and children she had met at refugee camps abroad.

“I have traveled to refugee camps in Ethiopia, Congo, Turkey and Jordan,” Haley said. “I have met with mothers that have been scarred by trauma. I have seen battered, aimless children lost to ignorance and extremism. … As long as we have a voice, we must use it to advocate for these mothers and children. … I will use my voice … because I am an American. And America can no more abandon the cause of human rights than abandon itself."

In the first public speech by a US foreign policy principal since President Donald Trump sent shock waves through Washington at his press conference with Russian President Vladimir Putin in Helsinki on Monday, Haley gave a stirring call for advocacy to alleviate the suffering of refugee women and children. But it was totally at odds with many Trump administration policies on refugees and migrants, most notably the controversial administration decision to separate the children of migrant families that was ordered halted last month after more than 3,000 children had been taken away from their parents.

Haley's speech was just the latest example of a growing chasm between the public stances of top administration officials such as Haley, Secretary of State Mike Pompeo, Secretary of Defense Jim Mattis and US intelligence chiefs, and the policy preferences and pronouncements made by Trump himself. The result has been extended uncertainty for both US government officials themselves, as well as American allies and adversaries, on what the US policy going forward is on a range of issues, from Syria to how to “push back” on Iran in the region to possible US cooperation with Russia in the fight against terrorism and the so-called Islamic State.

That confusion across the US government in the aftermath of Helsinki was evident this week, as Putin briefed Russian diplomats today on “verbal agreements” he said he and Trump had reached, while the White House said no commitments had yet been made. The State Department said it was assessing three Russian proposals, and US military officials said they had received no new instructions.

Meantime, Trump took to Twitter today to proclaim the Helsinki summit a “great success,” and said he was looking forward to a second meeting with Putin.

“I look forward to our second meeting so that we can start implementing some of the many things discussed, including stopping terrorism, security for Israel, nuclear proliferation, cyber attacks, trade, Ukraine, Middle East peace, North Korea and more,” Trump tweeted. “There are many answers, some easy and some hard, to these problems … but they can ALL be solved!”

“The Helsinki summit was the beginning of a process between the United States and Russia to reduce tensions and advance areas of cooperation in our mutual interest,” an NSC spokesperson told Al-Monitor on Wednesday when asked about comments by a White House adviser urging journalists to report on the “Syria talks.”

“We are reviewing the discussion between President Trump and President Putin, considering possible next steps, and have nothing further to announce at this time,” the NSC spokesperson said.

White House senior adviser Kellyanne Conway, talking with journalists at the White House on Wednesday, “asked why we weren’t reporting on Syria talks … when [the White House] has yet to provide any substantive info about what they discussed,” CBS White House reporter Weijia Jiang tweeted Wednesday.

“There were sort of three takeaways from the meeting, three proposals that we are currently assessing,” State Department spokeswoman Heather Nauert told journalists at a department press briefing Wednesday. “We’re still digging into the details.”

“Among the things that were proposed: a high-level working group with business leaders from both countries,” Nauert continued. “Another thing that’s been proposed is convening some sort of an expert council which would include political scientists from the United States and from Russia, diplomats, former diplomats, former military officials. … Also another proposal was that our NSC meet with the Russian NSC to discuss follow-up meetings.”

There has been “no new guidance for me as a result of the Helsinki discussions as of yet,” US Army Gen. Joseph Votel, the commander of US Central Command, told journalists at a Pentagon news conference today.

“For us right now, it’s kind of steady as she goes,” Votel said. “We have received no further direction than we’ve currently been operating under.”

It looks like it will be up to Pompeo to try to explain what happened in Helsinki and whatever agreements might have been tentatively reached on Syria and beyond. Pompeo is now slated to brief the Senate Committee on Foreign Relations on Wednesday, after what committee chairman Bob Corker, R-Tenn., complained was a frustrating and protracted experience trying to get Pompeo to appear.

Nauert attributed the difficulty to Pompeo’s hectic travel schedule, which included another around-the-world trip to North Korea, Vietnam, the United Arab Emirates, Brussels, Mexico and Helsinki since the Singapore summit in June.

But few could doubt that Pompeo is in a difficult position trying to vouch for what Trump told him was said behind closed doors during Trump’s one-on-one conversation with Putin, which lasted over two hours, said Jim Goldgeier, professor of international relations and former dean of American University’s School of International Service.

Pompeo “is in a tough spot,” Goldgeier told Al-Monitor today. “He really has no idea what happened in the one-on-one. All he is going to know is what Trump told him. And he is like everybody else. He knows it might be true, it might not be true. … And he is going to have to answer questions, did the president agree to something on Syria? … Will he really know what was said?”

For some US government agencies such as the Pentagon, the status quo may prevail over Trump’s disruptive positions, until it doesn’t, Goldgeier said.

An international diplomat who works on the region, speaking not for attribution, said he was not aware of any specific agreement on Syria talks that Trump and Putin may have struck in Helsinki. But he surmised from their public remarks in Helsinki that Syria humanitarian issues, and in particular the return of refugees, was one focus of their discussions. It could have implications for reconstruction aid. The United States and its Western and Arab allies had previously said they would not provide assistance for reconstruction in territory under the control of Syrian President Bashar al-Assad.

“As far as Syria is concerned, the task of establishing peace and reconciliation in this country could be the first showcase example of this successful joint work,” Putin said at the press conference with Trump in Helsinki on Monday. “Russia and the United States apparently can act proactively and … organize the interaction to overcome humanitarian crises and help Syrian refugees to go back to their homes.”

“If we can do something to help the people of Syria get back into some form of shelter … on a humanitarian basis … I think that both of us would be very interested in doing that,” Trump said at the press conference with Putin on Monday. “We will do that."

In the meantime, while the US government tries to assess whatever tentative proposals Putin and Trump discussed on Syria in Helsinki, several current and former US officials, speaking not for attribution, told Al-Monitor they expect Joel Rayburn, the former NSC senior director for Iran, Iraq, Syria and Lebanon, to join the State Department's Bureau of Near Eastern Affairs, likely as the deputy assistant secretary of state for the Levant. Rayburn could not be reached for comment.