Does Israel really need to be in a state of emergency?

State of emergency regulations established by the interim Israeli government in 1948 are still in place 70 years later. 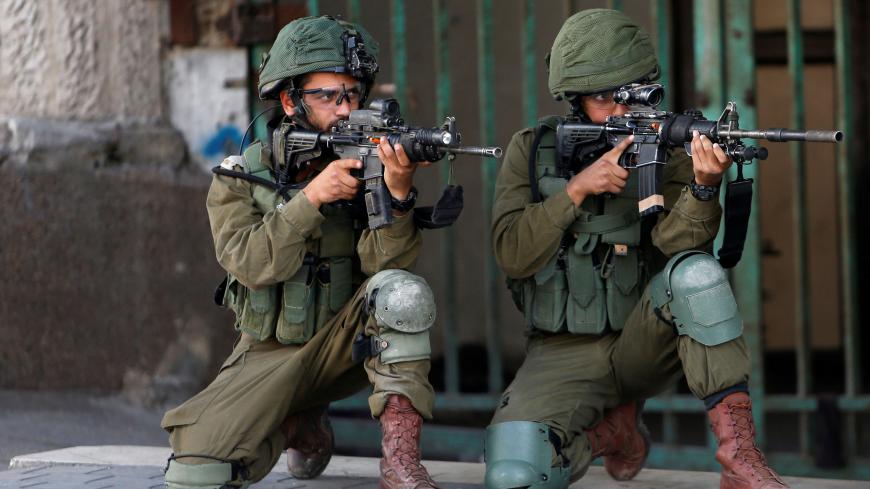 Israeli soldiers aim their weapons during a protest by Palestinians in Hebron, West Bank, May 11, 2018. - REUTERS/Mussa Qawasma

A cease-fire between Israel and Hamas was announced the night of July 14, following large exchanges of fire between the Islamist movement and the Israel Defense Forces. That there is an undeclared cease-fire — one not officially authorized by the Israeli government — does not, however, end Israel’s state of emergency. Actually, the state of emergency is always in effect, making it unnecessary to declare it every time there is an escalation of violence. There is no need to declare a state of emergency for an urgent call-up of the reserves, because such a call-up, under Order 8, does not depend on that. Whether dealing with people from Gaza setting nearby fields on fire or with using heavier weapons systems, there is no need for a formal decision on a new security status. The state of emergency is always present in Israel, because the tail wags the dog.

On July 12, Haaretz announced that a joint committee of the Knesset's Foreign Affairs and Defense Committee and the Constitution, Law and Justice Committee had decided to respond positively to a government request and recommend to the Knesset that it extend the current state of emergency by another year. No one was upset about it. How can anyone get excited over a situation that has existed since May 19, 1948?

It began at the height of the 1948 War of Independence. Israel needed to ensure that the public received goods and services, and there was nothing more natural for the interim government than deciding that a country that was just 5 days old, and already in a state of war, to declare a state of emergency. This way, it could procure existing resources from the public on behalf of the security effort. The war ended less than a year later, but the state of emergency remained in effect. Someone forgot to revoke it, or perhaps it was just all too convenient to give it up so easily.

While Israel still faces numerous threats and is still involved in conflicts and violence, no one can reasonably justify a situation that has allowed for the most draconian laws for the past 70 years and makes it possible to strip any citizen of his rights at any given moment. It is to the credit of Israel’s various governments that none of them has actually exploited the full, draconian potential of the law. For the most part, they have simply taken advantage of its more favorable aspects. On the other hand, the mere idea that the executive authority of a democratic state has granted itself almost unlimited power to strip citizens of their rights by claiming that the country is in a state of emergency is absolutely chilling.

The law makes it possible to use the state of emergency as a shield, protecting those laws and regulations intended to ensure that the market can continue to function even in a real state of emergency. Therefore, ministers and legislators alike used it to justify a long list of legislative acts on price controls and the provision of services. This meant granting the government the ability to do anything: from seizing land and property to regulating the manufacture of pudding and controlling the price of ice cream; from forcing employees to work overtime even if they had nothing to do with providing emergency services to suspending workers who decide to strike; from conducting almost unlimited searches of civilians to preventing citizens from leaving the country; from allowing the transportation minister to order sailboat owners to sail their vessels to places other than their intended destination to allowing the labor minister to cancel all vacations; from allowing the government to use regulations to overturn (nothing less than) laws passed by the Knesset to instituting rules concerning everything from diamond trading to the installation of air conditioners; and among other things, to overseeing the cost of tickets to horse racing events.

When I got to the last particular clause, I considered checking whether one of my aides had snuck it in to see whether I was paying attention. The clause was authentic. It should be noted that there is no horse racing in Israel (and I hope there never will be), but even if there were, what could it possibly have to do with the state of emergency? Would it really be harmful to state security if tickets cost more?

At that time, I had approached Prime Minister Ehud Barak and asked him to raise the issue of the state of emergency at the next Cabinet meeting. I then distributed a list of all the regulations that relied on the state of emergency and asked the government to make do with an extension of just half a year, not the customary one year, so that their ministries could work vigorously with the Justice Ministry to get rid of any emergency excesses. Most of the ministers were convinced to go along with this, so we set up an intergovernmental committee that eagerly got to work. Then, however, a problem arose with the Histadrut labor union. They were unwilling to replace an emergency regulation that makes it possible to suspend striking workers with a similar law. With that, the process hit a dead end.

It is time for Israeli authorities to agree that they must do away with the state of emergency and instead determine what the country needs in order to ensure the regular supply of vital services and goods in a situation of ongoing violence. They must pass a new State of Emergency Law, which would put these new laws into effect. All other laws and regulations that the state needs, regardless of whether there is a state of emergency, should be relegislated sparingly, while many other laws should be tossed out. It would be no problem to reinstitute the state of emergency, if it becomes necessary.

by Murielle KASPRZAK and Joseph SCHMID | AFP | May 26, 2022
END_OF_DOCUMENT_TOKEN_TO_BE_REPLACED