Israel is worried about UNRWA's announcement that due to cuts in US funding, it will not be able to open schools in the West Bank for the academic year scheduled to begin Sept. 1. 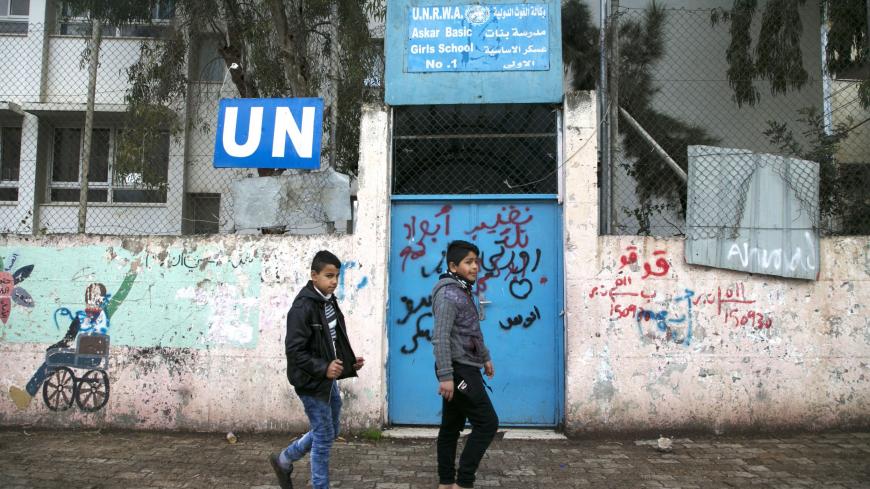 Palestinian children walk outside of the United Nations' school in the Askar refugee camp, near Nablus in the Israeli-occupied West Bank, on Jan. 17, 2018, after the White House froze tens of millions of dollars in contributions to the United Nations Relief and Works Agency for Palestinian Refugees, which operates schools in refugee camps. - GETTY/Jaafar Ashtiyeh

One of Israel’s greatest achievements of the past few years has been preserving the distinction between the West Bank and the Gaza Strip, keeping the 2 million Palestinians in the West Bank out of a circle of violence and terror. Israel managed to contain a wave of knife attacks by individual Palestinians, at least relatively; a breach occurred July 27, when a 17-year-old Palestinian murdered Yotam Ovadia in the Adam settlement. It has also managed to prevent Hamas from exporting the fire of its incendiary kites from Gaza to the West Bank.

This is all background to the issue the defense establishment calls the “UNRWA dilemma.” On the one hand, the United Nations Relief and Works Agency for Palestinian Refugees does not have many fans in Israel. The conventional wisdom is that the organization plays a decisive role in the perpetuation, exacerbation and expansion of the problems of Palestinian refugees. The US decision to freeze economic aid to UNRWA, amounting to hundreds of millions of dollars, is considered by Jerusalem to be another major success of Prime Minister Benjamin Netanyahu's government in enlisting the support of the Donald Trump administration. The government’s claims against UNRWA have succeeded in convincing an absolute majority of Israelis that the agency is little more than a respirator that keeps the Palestinian refugee issue alive.

There is another side to the coin, however, and it involves a single date: Sept. 1. On that day, tens of thousands of Palestinian students are scheduled to start the new school year. As of now, however, they won’t. Many Palestinian schools, especially primary schools, are financed by UNRWA, which has announced that given its dire finances due to the freezing of American aid, the schools cannot be opened. The Israel Defense Forces (IDF) is well aware that this poses a major problem, potentially generating the energy and critical mass to ignite the Palestinian street in the West Bank at any moment.

A senior Israeli military source tasked with dealing with the implications of what might (or might not) happen Sept. 1 tried to steer clear of the politics when discussing the issue with Al-Monitor. He is well aware that when push comes to shove, the clash between the strategic (UNRWA making its decision) and the tactical (Israel maintaining calm and preventing another intifada) could set off sparks that set the ground ablaze a month from now.

“When children in the Dheisheh refugee camp find themselves with nothing to do Sept. 1, they could head out to Highway 60 [the north-south route through the West Bank] and start making problems,” he said, speaking on condition of anonymity. “The entire situation could deteriorate from there.” He added, “We need to prepare for that possibility.”

The same source attributes the relative calm in the West Bank to two factors. The first, a military factor, involves Shin Bet and the IDF successfully preventing terrorist acts in close cooperation with the security forces of the Palestinian Authority. In 2017, they thwarted 400 attacks and made thousands of arrests. For Israel, the cost of the 54 attacks that did occur was tolerable. In fact, it was somewhat lower than in the past.

The second factor involves the quality of life in the West Bank. A top military official told Al-Monitor on condition of anonymity, “In the situation that has been created, the average Palestinian hardly sees the army. There are hardly any checkpoints, and freedom of movement is very high, at least relatively. We hardly ever see what we did in the past, with long lines and traffic jams at the checkpoints, as tens of thousands of Palestinians head to work in Israel or the settlements every day. We do not interfere with the fabric of day-to-day life, even on the toughest days, when terrorist attacks occur. The distinction we have drawn between the terrorists and the general population has proved itself effective.’’

According to the official, Israel distinguishes between three main groups of Palestinians in the West Bank. There is a small but determined group of “violent individuals, who want to conduct terrorist attacks and harm Israel. A larger group is also violent, but restrained and wary of engaging in terrorism. Then there is the vast majority of people, who are indifferent and simply want to live their lives in peace.”

As reported May 21 in Al-Monitor, the strategy for the West Bank adopted by IDF Chief of Staff Gadi Eizenkot and Shin Bet Director Nadav Argaman is to avoid disrupting day-to-day life while dealing with terrorism, and only terrorism, on a point-specific basis. Complementing this strategy is that young Palestinians in the West Bank are able to compare their relatively better quality of life with the worsening unemployment, poverty, and dire circumstances faced by their brothers and sisters in Gaza.

This takes us back to Sept. 1. The possibility that the current, relatively quiet situation could be interrupted if the school year does not begin as scheduled has been keeping members of Israel’s defense establishment awake at night. It could happen if UNRWA's decision turns a tactical situation into a strategic problem. Nevertheless, Israel still hopes that UNRWA's threat is ultimately a false alarm and that schools in the refugee camps open as scheduled.

“Unemployment in the … West Bank is relatively low, standing at just 17%,” a senior Israeli defense source told Al-Monitor, speaking on the condition of anonymity. “It is, however, much higher in the refugee camps, where it stands at about 50%. This makes them particularly volatile. It is there, in the refugee camps, where responsibility for the schools is left to UNRWA, which is now going bankrupt. This has resulted in a very dangerous situation, which will pose a major challenge to us over the next few months.”

Compounding the situation is the reportedly deteriorating health of Palestinian President Mahmoud Abbas. This leaves Israel with a major headache that is rapidly becoming a migraine. The most informed Israeli assessment on Abbas' health, based on foreign intelligence sources, is that he is suffering from a major illness and does not have long to live. What will happen when he dies is anybody’s guess.

Another senior Israeli military source said that for now, Abbas remains lucid and functioning and is in full control. One the other hand, no one will commit to this still being the situation next year or even next month. If Abbas and UNRWA end their historical roles at around the same time in the near future, the West Bank could get a resounding jolt.