Experts fear the quality of university education will go downhill as a result of Israel’s refusal to renew visas for many foreign professors teaching in universities in the West Bank. 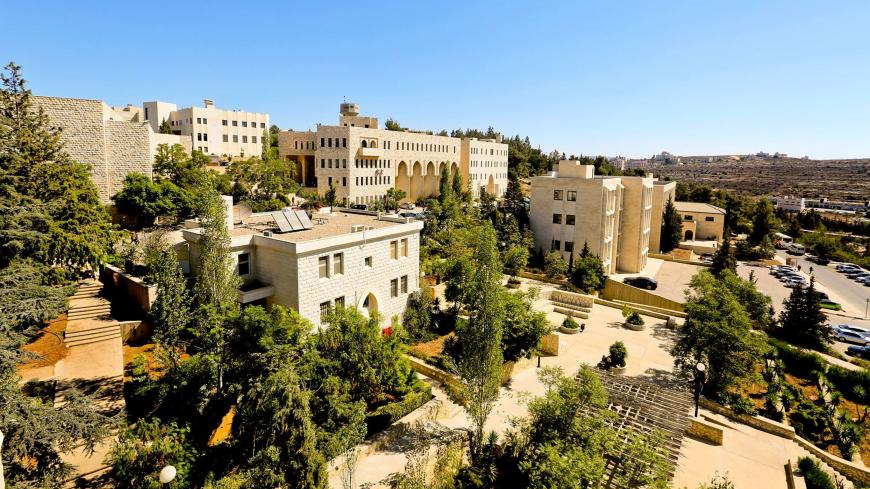 The campus of Birzeit University seen in an image uploaded Jan. 13, 2016. - Facebook/BirzeitUniversity

GAZA CITY, Gaza Strip — More than half of the academics who work at Palestinian universities and hold a foreign passport have faced denials or delays in visa processing from Israel during the past two years, Sabri Saidam, the Palestinian minister of education, said in a July 12 press conference held at the Palestinian Ministry of Education in Ramallah. Saidam said that Israel is obstructing the process particularly for academics of Palestinian origin who hold foreign passports, preventing them from acquiring and renewing visas for travel to Palestine for the purpose of teaching at a university.

On July 14, the Ramallah-based Birzeit University, one of Palestine’s most prominent universities, revealed in a statement posted on its official website that Israel rejected visa renewal applications for seven foreign academics, which forced three of them to leave Palestinian lands while the others awaits their expulsion.

“Other than the seven whose visa renewals were rejected, the fate of eight foreign academics is also uncertain,” Tina Rafidi, the spokeswoman for Birzeit University, told Al-Monitor. “They have submitted their applications and are waiting for a response from Israeli authorities.”

The university administration opted not to instigate the matter until after the Israeli decision was made. The administration hoped they could resolve the issue and renew the academics’ visas through Palestinian-Israeli channels before the new academic year kicks off in September, Rafidi noted. Those efforts, however, were to no avail.

Rafidi stressed that the 22 foreign academics who work at Birzeit University (including those of Palestinian origin) play a significant role in improving the quality of education, furthering cultural exchange and bolstering the university with foreign expertise.

An American professor, who is one of the seven foreign academics who has been working at Birzeit University for four years, revealed to Al-Monitor, “The seven academics, who are of different nationalities, have decided to go to the Israeli judiciary in the hopes of reversing the authorities’ decision to deny them visa renewal in Palestine.”

The professor preferred anonymity, fearing that her statements might be leveled against her by the Israeli prosecution at court as grounds for “incitement against Israel” charges, which would undermine her judicial action in the courts.

“Israel usually gives foreign academics a one-year visa in Palestine,” the professor added. “This visa is renewed upon expiration. Israeli authorities renewed my visa three times in the four years I have worked at the university. But I was shocked to learn that I was denied a visa renewal this time.”

She further noted that Israel didn’t provide any reasons for the rejection decision. “We were only informed of the rejection. This means that we are in violation for staying in Palestine,” she said.

Roger Heacock, a European history professor at Birzeit University’s Ibrahim Abu-Lughod Institute of International Studies who has been working for the university for 35 years, spoke via Skype at the press conference held by the Ministry of Education. Heacock revealed that he is still waiting for the response from Israel on his visa renewal application, but he expressed concerns that it might be rejected.

Heacock, who is currently in Cyprus, stressed that Israel’s policy against academics impedes the Palestinian universities’ aspirations to attain international levels, given that the presence of those academics is an important factor to achieve those goals.

Sadeq al-Khadour, the spokesman for the Palestinian Ministry of Higher Education, told Al-Monitor, “Targeting foreign academics at Palestinian universities deepens [Palestinians’] isolation from the world universities.” Khadour noted that this hurts the quality of Palestinian education.

He added that the education sector in Palestine direly needs those foreign academics for their unique experience in educational, cultural and research fields, which enhances the diversification of teaching methods and enriches education in Palestine.

Khadour revealed that his ministry is working on taking this issue to the international stage by exposing the Israeli policies against foreign academics at Palestinian universities through political and diplomatic channels within the international community.

Salwa Duaibis, the spokeswoman for the Ramallah-based Right to Enter movement, a group that defends the right of movement and residency in the occupied Palestinian territories, told Al-Monitor, “Israel is trying to fight the foreign presence in Palestine in an attempt to isolate Palestinians from the world and to get rid of any foreign witnesses to the daily Israeli violations against Palestinians.”

Duaibis stressed that fighting foreign presence is not limited to academics at Palestinian universities, but also applies to tens of thousands of foreign passport holders who are trying to acquire a reunification and residency in the West Bank on account of kinship and marriage to Palestinians.

Duaibis said that 45,000 foreigners residing in Palestine face a constant struggle to maintain their residency in Palestine, as some of them are in violation from the perspective of the Israeli law after their visas expired and their efforts for a renewal were rejected.

Rafidi warned, “Should this Israeli policy against foreign academics at Palestinian universities continue, our ability to provide an education of international quality will be further jeopardized.”

Rafidi urged the governments of the world, as well as human rights groups and the international community, to apply pressure on Israel to compel it to allow foreign academics at Palestinian universities, as they are an indispensable cornerstone for improving and elevating higher education in Palestine.