Why is Israel raiding Palestinian universities?

As the Israeli army continues to raid Palestinian universities, the schools hope to reveal Israel's aggression to the world. 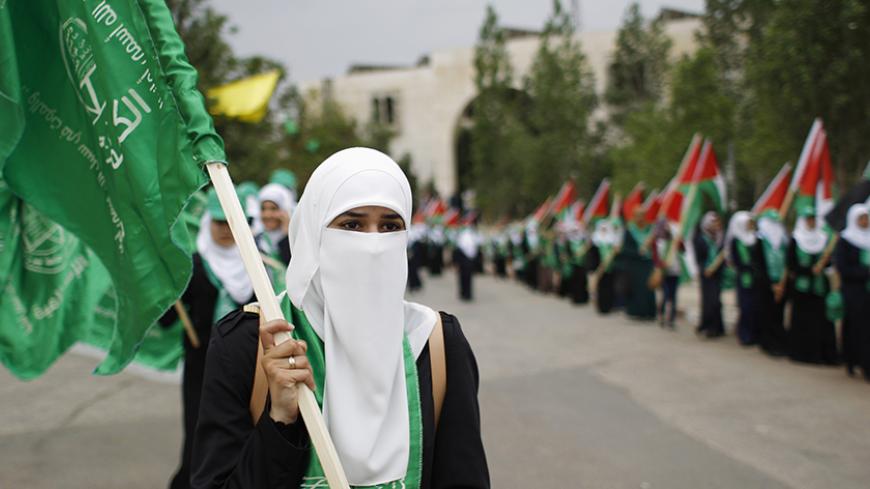 A Palestinian student holds a Hamas flag as she takes part in an election rally for student council at Birzeit University in the West Bank city of Ramallah, May 6, 2014. - REUTERS/Mohamad Torokman

The Palestinian academic community hopes to internationally shame Israel for its raids on universities and disruption of education in the West Bank.

During the current uprising in the West Bank, Israel Defense Forces (IDF) stormed two Palestinian universities: Birzeit University near Ramallah on Jan. 11 and Al-Quds University at Abu Dis in East Jerusalem on Jan. 29.

The IDF attacked the Birzeit student council building and left a great deal of havoc behind. They confiscated computers and destroyed furniture. They also seized office supplies and four student lockers.

At Al-Quds University, the IDF raided the student blocs’ offices, tampered with their contents and confiscated computers. They broke into the Dawa and Fundamentals of Religion Faculty building, where they vandalized the students’ club and seized cultural activities and services materials and tools.

In October, the IDF had conducted several successive incursions into Palestine Technical University at Kadoorie in Tulkarm. They clashed with students within the university premises and fired tear gas canisters and rubber bullets at them. That raid followed nearby, but off-university, clashes between young Palestinians and the IDF occurred near the Israeli Geshuri agrochemicals factory. The security forces tracked down the students involved in the incident.

“The Israeli army is attacking universities within the scope of an Israeli systematic scheme designed to eradicate the Palestinian identity and tame the Palestinian young generation's libertarianism by disrupting the educational process," Palestinian Minister of Education and Higher Education Sabri Saidam told Al-Monitor.

In a Jan. 11 statement, the IDF said it raided Birzeit University to confiscate Hamas propaganda materials, calling the materials “inflammatory.” The Israeli army considers “incitement” to be the main reason behind the escalation of the current uprising.

But Israel’s storming into university campuses raised questions among Palestinians about the protection procedures to be implemented and the role of the Palestinian government and civil society institutions in this matter, especially in the absence of a defense strategy for universities.

Ghassan Khatib, vice president for development and communications at Birzeit University, told Al-Monitor, “Palestine cannot have a strategy to defend and protect universities, as the Israeli army controls [the Palestinian] territories and can storm any institution in the city. There is no way to prevent Israeli forces from storming universities, but there are ways to make these forces pay for these violations.”

Imad Abu Kishek, president of Al-Quds University, told Al-Monitor, “Al-Quds University called on all Palestinian universities and human rights institutions, including Al-Haq and Al Dameer organizations, to form a joint committee — which is still under discussion — to formulate a strategic vision and draw a roadmap to protect universities from intrusions through the legal frameworks.”

Saidam said, “Palestinians are counting on exposing Israel before the international community and academic institutions to pressure it to stop its violations." He added, "We addressed international academic institutions, mainly UNESCO, and informed them about the Israeli attacks on universities and schools to ensure respect for the sanctity of education in Palestine."

Although UNESCO did not take a stance against the raids, the Ministry of Education, the Palestinian government and its institutions have called upon Arab, Islamic and international universities to boycott Israel academically and to consider the storming of universities acts of terrorism.

“In light of the continuing attacks, [even] international efforts are not enough. This is why we decided to pursue a media policy to expose the Israeli transgressions before all international [organizations] visiting Palestine,” Saidam said.

"We are planning a meeting — which has yet to be scheduled — to be attended by consuls and representatives of foreign countries to view a documentary produced in cooperation with the Ministry of Information, revealing Israeli attacks on educational institutions," Saidam added. "We are also planning meetings with Palestinian human rights organizations to discuss ways to raise this issue at the regional and international levels.”

According to Khatib and Abu Kishek, Birzeit University and Al-Quds University have informed international academic institutions of Israel’s incursions and their impact on the educational process.

These academic institutions have yet to respond. Al-Haq said in a Jan. 12 statement that “universities are seen as civil properties and should not be attacked, as per the international humanitarian law,” and that Israel "violated its legal obligations with regard to the Palestinians’ right to education."

Amjad Barham, president of the Palestinian Federation of Unions of University Professors and Employees, told Al-Monitor, “The attacks on the Palestinian universities is the main issue we decided to raise in the international and regional academic meetings that we will attend in order to exert pressure on Israel to stop its aggressions."

Palestinians seem to be seeking to exploit Israel's attacks on academic institutions to expand the scope of a 15-year-old campaign for a comprehensive boycott of Israel economically and culturally.

Birzeit's Khatib said, “We called on international institutions to respond to Israel’s incursions into universities by joining the campaign for the academic boycott of Israel. This is a widespread international campaign, which we believe is an appropriate response to the continued Israeli violations.”

Saidam echoed the idea, "We seek to exploit these attacks in the campaign for the international boycott of Israel by providing information and statistics documented by our friends and supporters across the world. Israel has only itself to blame for this battle.”

George Giacaman, a member of the constituent body in the International Academic Boycott of Israel and associate professor of philosophy and cultural studies at Birzeit University, told Al-Monitor, “We must face assault on universities by adopting several approaches, including exploiting assaults in the international boycott of Israel, which includes the academic boycott campaign.”

He mentioned other approaches, saying, “Legal institutions and human rights organizations must shed light on these violations through the international media, which must be pressured to put these violations under the spotlight, as some lobbies are imposing strict censorship on Palestinian media outlets."

“Some Palestinian embassies are not subject to accountability or assessment. Universities in Palestine and the Palestinian Liberation Organization-affiliated institutions are not deploying sufficient efforts to protect themselves,” he said.

The Israeli army had waged an extensive campaign against Palestinian universities in 2014 following the disappearance of three Israeli settlers in Hebron. In June 2014, Israeli forces raided Birzeit University and confiscated the contents of student blocs’ offices. The IDF also attacked the Palestine Polytechnic University building in Hebron and the building of the Arab American University of Jenin for the second time, as well as Al-Quds University in Abu Dis.