Why Israeli Arabs prefer studying in the West Bank

Israeli-Arab students find it difficult to pass the entry exams of universities in Israel that favor Hebrew-speaking Israeli Jews, and prefer enrolling in West Bank universities. 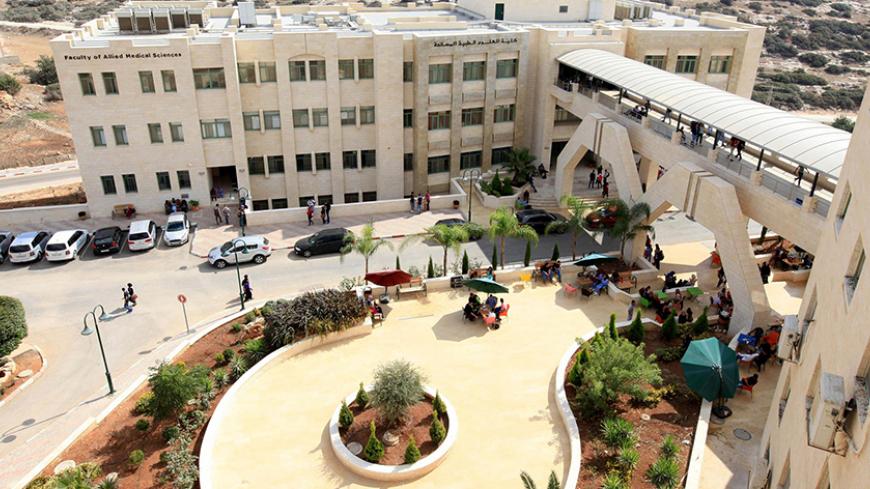 Chairman Ayman Odeh of the Joint List, the unified slate of predominantly Arab parties, was invited to tour the Arab American University in Jenin on Nov. 6, and to a meeting with the university’s heads. The objective of this get-together was not a mere courtesy or get-to-know you visit, but to show Odeh the integration of Israeli-Arab students in the only private academic institution in the West Bank.

The Arab American University in Jenin was founded in cooperation with California State University, Stanislaus, in 2000, just before the start of the second intifada, in the city that is at the forefront of the armed struggle against Israel. In fact, Jenin was often called by Israeli media “the capital of suicide terrorism.” In the university’s early years, it operated in the shadow of a complex security situation involving frequent closures, encirclements and military operations. In the past two years, with the aid of contributions from all over the world, the university built itself up to the position of a leading academic institution in the territories. In this way, it also became attractive to Arab students with Israeli citizenship.

According to the university’s communication office, half of the 10,000 students who are currently enrolled are from Israel. Most of them enrolled in degree programs such as nursing, pharmacy, engineering or law — majors that give them a high chance of finding employment in the future. But the department that is most attractive for Israeli students is dentistry. This is a profession that will — most probably — allow them to make an honest living within the supportive Israeli-Arab sector, without having to "ask favors" of Jewish employers or being subject to frequent discrimination during the process of finding work.

Other universities in the West Bank, such as An-Najah University in Nablus and Birzeit University just outside Ramallah, also have many students from Israel. These students decide to study in the West Bank for two main reasons. Some feel that the incitement messages advocated by the Israeli right-wing government have infiltrated academia. Thus, Israeli academic space has become much less tolerant of them. Others find it extremely difficult to pass the acceptance exams of the Israeli universities. These young people feel that the exams are tailored to Hebrew speakers and those who grew up in the Jewish-Zionist culture, without making allowances for minority groups. For example, Technion, the Haifa technology institute, raised the bar of its entrance exams in Hebrew this year.This change mainly harms members of minority groups who want to study at Technion.

A comprehensive document was released in 2013 by the Sikkuy Association for the Advancement of Civic Equality in Israel regarding the representation of Arab citizens in institutions of higher learning. In this document, Nohad Ali lists the barriers faced by young Israeli-Arabs who want to study in Israel’s universities. The first obstacle is the huge gaps in terms of budgetary investment, and subsequently the academic level, between high schools in the Arab sector and the Jewish sector. These gaps are making it difficult for the students to pass university acceptance tests. Even the psychometric tests — a university entry requirement — are adapted to Jewish culture and society and do not take into consideration the cultural backgrounds of young Arabs.

“I mainly prefer that Arab students study in Israel,” Odeh told Al-Monitor. He said that studying in Israel would assist these young people in retaining their national identity and becoming familiar with the "Israeli experience" — elements that would, in turn, help promote the integration of Israeli-Arab students into society. “We have requested that a university be founded in Nazareth for young Arabs who want a higher education, but the state has been ignoring us for years,” Odeh said.

He added that Ramzi Jaraise, the former mayor of Nazareth, submitted his last application for the university to the Planning and Budgeting Committee of the Council for Higher Education in 2013. Jaraise even set aside a large area and resources for the founding of an Arab university in his city, to enable young Arabs to acquire an education under conditions that are consistent with their culture and language. Odeh said, "Jaraise told the committee, 'We are a national minority group. We can teach in Arabic and we have the ability to teach various subjects, because professional manpower is available that has acquired an education and has specialized in institutions of higher learning in Israel.’ But nothing helped. Israel still thinks that this is part of national rights that shouldn't be given to the Arabs.”

At this point, the founding of a university for the Arab minority is not even on the agenda. By contrast, Al-Monitor published an article about Ariel University (situated beyond the Green Line) that received clear budgetary preference from the state in comparison with the rest of Israel’s institutions for higher learning.

Al-Monitor spoke with a female resident of Umm al-Fahm who just started studies for a degree in computer science at An-Najah University in Nablus. Her father, a well-known figure in Israel, tried to persuade his daughter to study in one of Israel’s institutions of higher learning, but she insisted on studying in the West Bank. She told Al-Monitor on condition of anonymity that three years ago her sister completed her degree in English language and literature at Tel Aviv University; she subsequently taught at the city’s Kibbutz College of Education.

“Her life with the Jews was a nightmare. She was isolated the whole time and the Jewish students didn’t exchange a word with her,” the female resident of Umm al-Fahm said. She said that she did not want to have the experience her sister had, even though she knows that an Israeli degree is viewed as more prestigious than a degree from a West Bank university. “Something has happened in recent years, especially this past year. No one gives us the time of day — they view us as a threat. Arabs are scary [in the eyes of Israeli Jews]. We — the members of this generation — feel more and more distanced from the Jewish youths. We have nothing in common, so I prefer to study in Nablus even though it makes it more difficult for my family. And my father says it makes him very sad.”

In general, many of the Israeli Arab students encounter their Israeli peers for the first time at university. Despite rifts between Israeli Jews and Arabs, universities remain the best place for them to meet. Pushing the Arab students to West Bank universities will end this bridge between communities. If Arab students study in Israeli universities, Israeli students then gain a greater understanding about the condition and mood of Palestinians living under Israeli occupation. The unique Israeli-Arab identity, developed over the years, will be fractured and shattered.

The father of the student from Umm al-Fahm told Al-Monitor, also on condition of anonymity, that he is angry at Israeli society for rejecting his children despite his efforts to integrate them in the society. He said that the exodus of Arab young people to study in the territories and in Jordan en masse will deepen further the gap between Jews and Arabs in Israel. “I tried to raise my children with the great ambition of becoming fully integrated into the State of Israel. Instead they are thrust aside to the territories where the reality is different — ideals and viewpoints on all subjects are different [than here]. My daughter is going to be taught there. I have no idea what she will be like upon her return,” he concluded.