Will Iran reinstate its abolished Senate?

Nearly 40 years after the dissolution of the Senate, some Iranian politicians are increasingly speaking about the need to revive the country’s abolished political body. 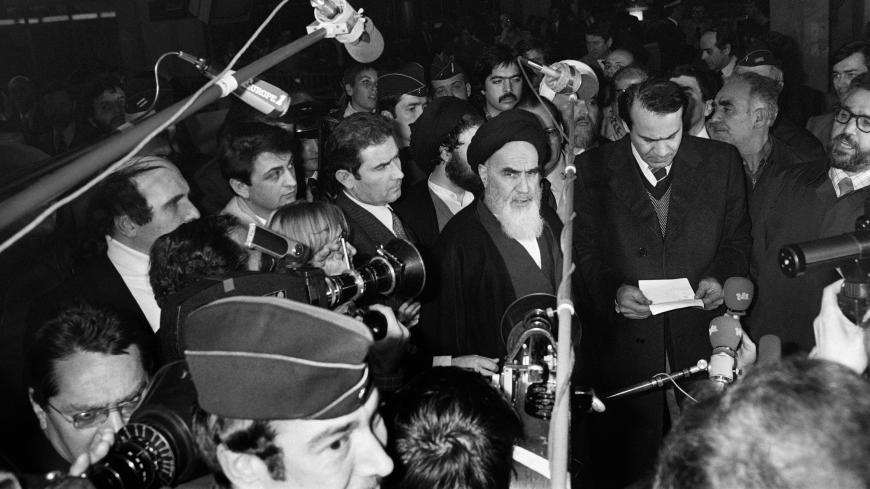 Iranian opposition leader in exile Ayatollah Ruhollah Khomeini gives a speech as journalists surround him at Roissy airport near Paris, Jan. 31, 1979; the shah had left Iran two weeks earlier. After Khomeini came to power shortly afterward, Iran's Senate was abolished; now some politicians would like to see Iran have such a political body again. - MARCEL BINH/AFP/Getty Images

Forty years after revolutionary leader Ayatollah Ruhollah Khomeini described the Iranian Senate as a “stupid” entity, certain political figures are saying that such a chamber now is a “necessity” for the country. Prior to the 1979 Islamic Revolution, the Senate was part of the political structure of Iran. But the new constitution written by the revolutionaries abolished it and introduced unicameral government.

What is notable today is that those who are speaking of the importance of reviving this assembly hail from both sides of the political spectrum. This means there is hope for an agreement to emerge. On the other hand, one key issue is that the majority of the political figures inside Iran have chosen not to express an opinion regarding a senate, since they do not consider it a priority, and more importantly, some influential high-ranking officials have publicly expressed their opposition to such an idea.

During the past 40 years, the Iranian Constitution has only been revised once, in 1989, by the orders of Ayatollah Khomeini. Since then, the Iranian government has not shown any serious interest in revising the constitution, which would require the consent of the supreme leader. In recent years, Supreme Leader Ayatollah Ali Khamenei has only once spoken about the possibility of changing the political structure of the country, back in 2011, when he mentioned the possibility of replacing the president with a prime minister. Even then, he had said such a move would only take place under special circumstances. Now, seven years later, there are no signs that the Iranian leader, or indeed the country’s political establishment, is interested in taking such a step.

Mid-level political forces, however, have called for the country to have a senate again. Mohammad Reza Bahonar, one of the more influential figures of the Principlist movement, and Mohammad Javad Fathi, a Reformist member of parliament, have both spoken of the importance of such a step. Fathi even resigned about a month ago in protest of the parliament’s inability to exert any influence. In an interview with local media, Fathi, whose resignation was not accepted by parliament's presiding board, said one of the main reasons why he decided to resign was the interference of “parallel organizations” in affairs of the parliament. He said that instead of all these parallel organizations, the country needs a senate.

Only two weeks later, Bahonar, who is one of the veteran members of the Principlist camp, made a similar comment, saying, “After serving for seven terms as an MP, I say that the constitution should be revised and that we should have a senate working alongside the parliament.” He emphasized that one assembly is not enough to govern a country. In the summer of 2017, one of the lawyers of the Guardian Council, Nejatollah Ebrahimian, flatly stated, “We need a senate.” Ebrahimian’s words are important since he is one of the 12 members of the Guardian Council, one of the most influential and powerful political organizations in Iran. All the bills passed by the parliament need to be approved by the Guardian Council before they can become law. Moreover, all the candidates for parliamentary and presidential elections must first be approved by this council.

The importance of reconstituting a senate also has been discussed in various academic and scientific meetings.

However, this is just one side of the story. On the other side, there are powerful forces who are not only not interested in a new senate but have not shied away from clearly expressing their disapproval of such an idea. For example, in a TV program last year, Ayatollah Mahmoud Hashemi Shahroudi, the chairman of the Expediency Council, said the body he chairs in effect acts as a senate in Iran’s political structure. Shahroudi said that he believes that after the revolution, Ayatollah Khomeini had assigned some of the key duties of the old Senate to the Expediency Council so that, if need be, the council could participate in the legislative process, and that thus there is no need for a senate. One of the duties of the Expediency Council is to act as a mediator when the parliament and the Guardian Council are in serious disagreement with each other.

Shahroudi’s comments, however, were met with criticism inside Iran. Some said the Expediency Council has no legislative role, while others mentioned that the council could only take the place of a senate if its members were elected by the people. Currently, the members of this council are chosen by the supreme leader.

Certain political figures such as Abbas Salimi Namin, an analyst with ties to the Principlist movement, say that while the Expediency Council cannot take up the role of a senate, it would be possible to reshape this council into such an assembly. He also said the country needs something similar to a senate. At the same time, certain supporters of the idea of forming a senate, such as Reformist political activist Mohammad Naimi Pour, are worried that since Iran is currently a “semi-democracy” and because there are no strong political parties in the country, forming a senate might have negative consequences.

In reality, the only certainty is that there is regret over the dissolution of the Senate after the 1979 Islamic Revolution. The existence of such a regret could result in this upper chamber being reinstituted at some point in the future, but for now, one can only wait and see whether the debate on this will have practical consequences. Of course, such an outcome would require one major condition: the supreme leader would have to give his consent for the constitution to be revised and for a senate to be formed.