A military zone has long inhibited exploration of the ancient and massive site of Beit Lehi, but archaeologists are using technology to share its secrets with the world. 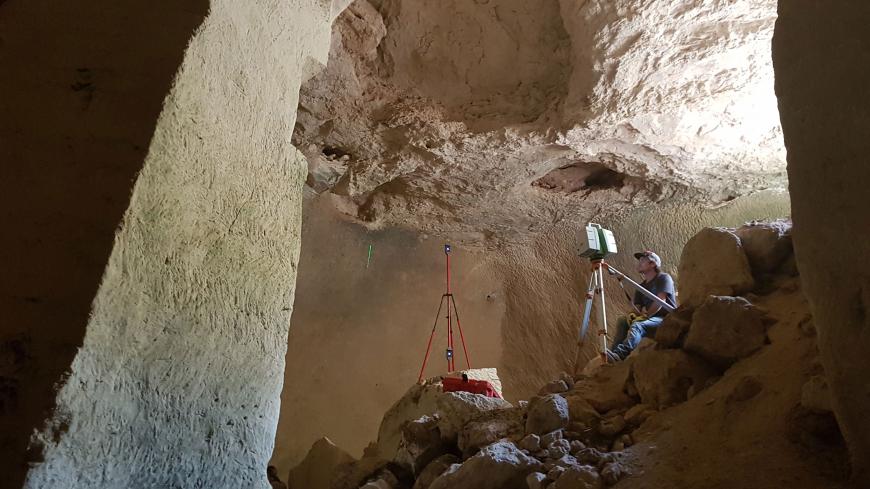 A researcher takes part in an exploration and documentation of the ancient city Beit Lehi in central Israel, July 2018. - Ilan Ben Zion

A team of Israeli and American researchers is using cutting-edge technology to explore and document an obscure and inaccessible but increasingly significant archaeological site in central Israel.

The Hebrew University of Jerusalem and Utah Valley University (UVU) are expected to roll out in August a one-of-a-kind multimedia guide integrating 3D imaging and virtual reality to bring the ancient city of Beit Lehi, touted as “the lost city of ancient Israel,” to life. The digital guide to the site is slated to be launched next month.

The site, which extends over a few hilltops, was occupied intermittently from the Iron Age down through the Mamluk period — nearly 2,200 years — before being abandoned around 1400 A.D. The surface bears the remains of a medieval mosque and village and an earlier Byzantine church, but below are a series of underground chambers carved out of the soft limestone. These include a massive columbarium (dovecote) with over 1,000 niches for birds, making it possibly one of the largest in the world, as well as stables, quarries with gigantic support pillars and escape tunnels, all dating from the 3rd and 2nd centuries B.C. to the 2nd century A.D.

Archaeologists have found over 50 different inscriptions at various places around the site in Hebrew, Greek and Arabic, including a 6th century B.C. Hebrew inscription bearing the name of Jerusalem and the Israelite god Yahweh.

First excavated in the 1980s, Hebrew University archaeologist Oren Gutfeld has returned in recent years with colleagues from the Israel Antiquities Authority and UVU to continue exploring and documenting the site.

“This area is untouched by archaeology, but it’s a gold mine,” Gutfeld told Al-Monitor as his jeep rumbled over the rocky track leading to Beit Lehi. He estimates that only around 10-15% of the site has been excavated. “We don’t have any idea how big it is. That’s the question.”

The UVU team has aided Hebrew University archaeologists in mapping and imaging the site using technology used by engineers to measure and map bridges and roads. Lidar — a laser imaging detection and ranging device capable of making 20 million measurements in 12 minutes — is being used to create three-dimensional maps of Beit Lehi’s vast caverns and tunnels. Advanced 360-degree cameras take photographs that are stitched together to create a high-quality image of these massive spaces that can be used in virtual reality applications.

Aboveground, the UVU researchers have deployed drones to create high definition aerial images of the ancient city’s structures. They not only document the site but have also helped discover previously unknown buildings. Michael Harper, a professor of digital media at UVU, explained that by using a technique called photogrammetry, the aerial photos taken by drones create topographically “flat” images that make the concealed outlines of structures “pop” out of the tawny scrubland.

“People thought it was a small community, but now we know it was a large urban center,” Gutfeld said.

The remains of imported luxury goods from as far afield as Rhodes and a subterranean oil press “are not indicative of modest, sleepy villages,” said Michal Haber, an archaeologist with the Israel Antiquities Authority involved in the dig. Instead, Beit Lehi appears to have been a prosperous, interconnected town during the Hellenistic and Roman periods. “We feel that every [dig] season, there’s something new” that is discovered, Haber told Al-Monitor.

Michael Harper, a UVU professor of digital media who is heading the project, said that the various types of images being taken at the site by students from Utah are being used both for research and to create a multimedia guidebook and “interactive magazine” that provides users with information about Beit Lehi. The magazine integrates 3D images of artifacts found at the site, aerial photos and other types of media to let users explore and understand the site in a more comprehensive way than a rare visit would be able to.

The digital media element of the project is one of several opportunities for UVU students across multiple disciplines to participate in hands-on “engaged learning” and gain valuable experience, Harper said, from photography and publishing to graphic design.

The magazine, whose first issue is due online this fall, is expected to be updated annually and will include rolling updates about new finds and articles about different aspects of Beit Lehi’s history.