The new construction sites in Beirut are built without taking into consideration the archaeological heritage of the capital. 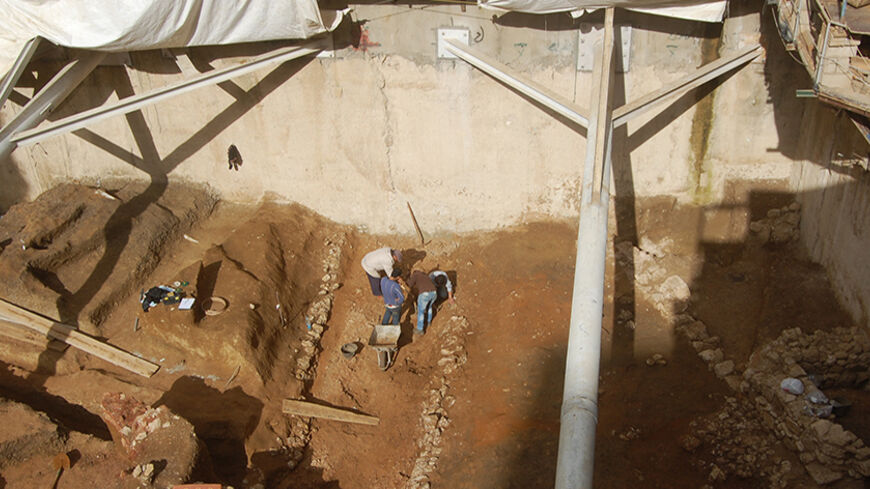 The capital of Lebanon is considered to be over 5,000 years old, making it one of the oldest cities in the world. Phoenicians, Hellenists, Romans, Byzantines, Arabs, Crusaders and Ottomans built and lived in Beirut, leaving behind different layers of civilization that are still being discovered. Construction cranes have been a common site in Beirut since the end of the civil war, and today, private investors are quick to rid plots of land of ancient remains.

What kind of city should be built? This decision was taken away from Lebanese citizens a long time ago. In 1994, for instance, Solidere, a Lebanese joint-stock company, founded by former Prime Minister Rafik Hariri, made an agreement with the government to rebuild Beirut's central district. “Try to imagine a destroyed city, with no water or electricity, a few refugees,” Leila Badre, an archaeologist who teaches at the American University of Beirut (AUB), told Al-Monitor. “Solidere used $1 billion to rebuild as fast and as much as they could, starting with piping and electricity. Their plan was established without considering the archaeological aspect.” After an international call from UNESCO to see what was going on on the ground, archaeologists from all over the world, the Lebanese University (LU), AUB and the French institute interfered in the project, which led to push “the developers to conduct excavations and pay their own excavations,” Badre said. A special solution come from Decrees 2786/92 and 4830/94: For very important monuments or ruins by Solidere and kept in situ, the company must compensate the developer by giving him a substitute land instead at no extra charge to him nor the Lebanese state.

Activists involved in conserving the historical remains of Beirut focus on the destruction done. Raja Noujaim, who leads the legal battle of the Association to Protect Lebanese Heritage, told Al-Monitor, “360 sites were exacavated since the 1990s in Beirut. Today, only seven remain on Solidere's zone, such as the Phoenician Tell, the Little Seraglio, the Phoenician neighborhood under the souks, a part of the Roman Forum, the Roman Baths, the Zawiyat and the Forgiveness garden. Most of the time, there is no entrance, no guide, and no information.” 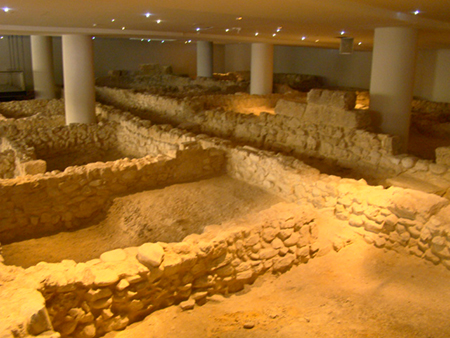 The Phoenician neighborhood under the souks

Questioned by Al-Monitor about this, Solidere's press officer, Nabil Rached, said, “The operation started as a plan targeting to preserve the city’s history and its heritage … to rehabilitate Beirut as a business center, a tourist destination and a prime residential area. Archaeological discoveries are ongoing on four important sites that are conserved in situ. The Phoenician Tell and the Forgiveness garden are not restored yet; meanwhile, the Roman Baths and three small excavations are ready.” 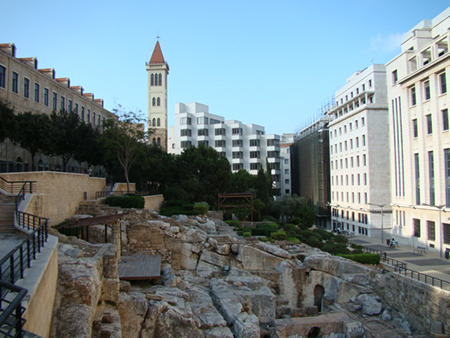 In and around Beirut's central district, the most expensive part of the city, high protection panels hide the view at the construction sites. Work there mostly involves deep digging for ancient artifacts and structures, which fall under the responsibility of the Directorate General of Antiquities (DGA), a technical unit of the Ministry of Culture in charge of the protection, promotion and excavation activities at all sites of national heritage in Lebanon. An archaeologist and a team to excavate is sent for when an investor who plans to build on a site finds something that could be of historic value.

Jean Yasmine, DGA project manager at the Council for Development and Reconstruction, told Al-Monitor, “There are three solutions: If the findings are not valuable in their totality, they are dismantled and given to the DGA; if there is a very important monument, it has to stay in situ and the state has to expropriate the field; and if only a part is significant, it will be conserved as part of the project or displayed in another location. Basically, it depends of the scientific value and the developers’ funds, but the experts who write the final recommendations for each site are from the DGA, from the state.”

Then who are those experts? Noujaim said, “The former Solidere people are now working with the Ministry of Culture, and are used to justifying the destruction of historical sites.”

Al-Monitor looked at two excavation sites in Saifi: the Saifi gardens, two lots of 2,500 square meters (just under 27,000 square feet) and a smaller lot in front of the Saifi Suites Hotel. In Zone 1 of the first site, Georges Haybe and his team from LU found Hellenistic tombs as well as a Roman monument. In Zone 2, they discovered pipes and some objects related to the end of the Hellenistic era, which were given to the DGA to allow the construction to start. The second site revealed a large pottery kiln, some traces of industry and a deep ravine. The kiln was dismantled and given to the DGA. “This is a major discovery that might tell us where the ceramics found in Beirut are from, thanks to the certification fees that we found with the kiln,” Hadi Choueiri, an archaeologist teaching at LU, told Al-Monitor. 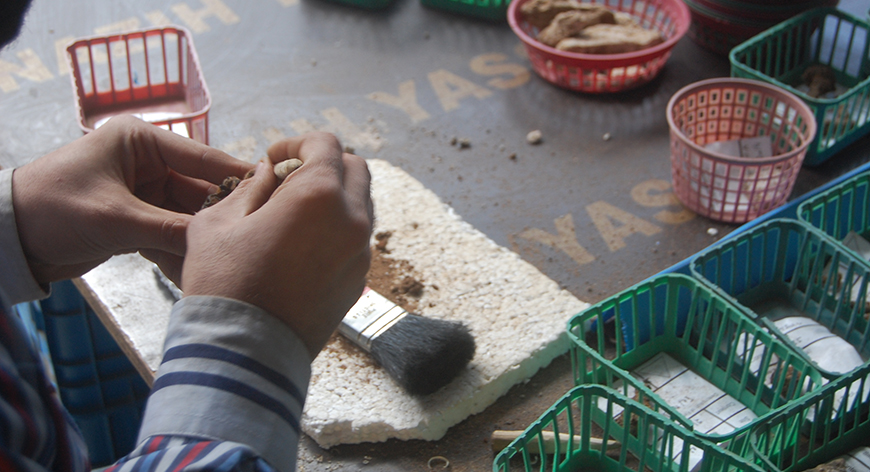 An archaeologist works on cleaning some objects before classification.

Other sites that were developed are still discussed by archaeologists, one of which is the so-called Phoenician port, or site BEY 194, Plot 1398 (Minet el-Hosn). It was classified in 2011 by then-Minister of Culture Salim Wardy as an archaeological monument. In June 2012, the DGA led new evaluation reports, one by Ralph Peterson and another by the culture minister's scientific advisory commission, who issued a completely different report from that of Hisham Sayegh, the first archaeologist who worked on the site. The new report denied Sayegh’s findings, even though many international experts sent their own reports to the DGA, asking for the site to be saved. At that time, the new minister of culture, Gaby Layoun, issued a decree authorizing the destruction of the site. “The developers didn't want to keep the site because it was carved in stone, so impossible to dismantle or build on,” Noujaim said. “They destroyed everything at 7 a.m., while the ministry's decree was issued at 12 p.m.”

Assaad Seif, a Lebanese antiquities official who oversaw both reports, told Al-Monitor, “The first archaeologists couldn't interpret the site, and bad information went to the press, so the ministry asked a second team to re-evaluate. As a professional, you must not prime ideology over scientific interest, and not enter into a pro or con logic.” This opinion is shared by Hans Curvers, a Dutch archaeologist who has been working for Solidere since 1992 and who contributedoff to the second report on Plot 1398. “An archaeologist shouldn't be an activist, he can give information and data to civil society, reporters and associations, but it is not his duty to push politicians. Sometimes the DGA listens to the developers, sometimes it doesn't, sometimes the developers exert a lot of pressure. … The archaeologist is never respected for his interpretation, which is his only duty. It's very hard to convince people to spend money on ruins; we have other priorities in Lebanon. You have to make a choice, not everything can be preserved,” he said.

Money is a powerful factor in the current situation. According to Seif, “Solidere doesn't keep the buyers well informed; they refuse early surveys for fear of not selling their plots. The DGA has a preventative and supportive attitude in approaching owners. We are satisfied when they think of archaeology as an asset, a financial plus-value. Since 2005, developers have been integrating the excavations in their work and allocating more money to preserve the ruins and integrate them in their buildings."

For some archaeologists, the situation is intolerable. Curvers' most fierce opponent, Naji Karam, is currently being sued by the former minister of culture for defamation. “I participated in excavations in the 1990s, but Solidere wanted to give only five plots to archaeologists. But those were public spaces, not their property. I asked about a protocol. There was an agreement between the DGA, UNESCO and Solidere to cover more space, and I could keep working there if I kept quiet. … When I saw a bulldozer tearing apart 19 meter-long [62-feet-long] mosaics, I couldn't [keep quiet]. I was threatened, and eventually kicked out. I will not remain quiet,” Karam said.

There is indeed an archaeological conflict in Beirut and Lebanon. Civil society gets involved by creating nongovernmental organizations and associations that try to collect data and alert the public about sites being excavated, politicians hiding information and developers destroying heritage, before gathering people to protest. One of them is the Association to Protect Lebanese Heritage, which implemented a participatory map aiming to keep the Lebanese informed. However, such actions are limited by the difficulty to gather enough activists and citizens around a cause that could seem very far from life's preoccupations such as water and electricity supply.

[EDITOR'S NOTE: This article has been updated to include additional information supplied post-publication, clarifying Decrees 2786/92 and 4830/94 and the DGA reports. Also, Naji Karam is currently being sued by the former minister of culture and not the Culture Ministry.]