Tourism in Egypt's South Sinai governorate was dealt a blow after authorities banned the use of SUVs and closed off many mountain trails throughout the peninsula because of security concerns. 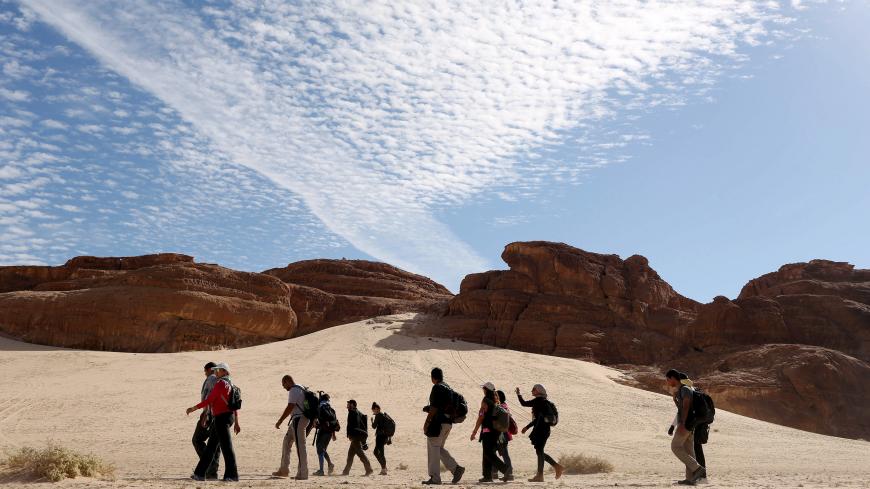 Tightened security measures in the Sinai Peninsula are hurting tourism in the popular mountains of the South Sinai governorate, as the Egyptian army works to prevent terrorist attacks. Now some politicians are trying to loosen the measures in the south of the peninsula, which is considered safer.

Islamist groups linked to al-Qaeda and the Islamic State have plagued North Sinai governorate for years. In November, hundreds of people, including dozens of children, were killed in an attack on a northern Sinai mosque. Egypt's armed forces then announced Feb. 9 that they were launching a comprehensive military operation in the peninsula. The army closed several mountain trails and banned SUVs, which are often used by tourists for off-road trips, but are also used by armed Islamist groups in the north. The military is still on high alert.

Attiya Moussa Gabali, a parliament member for South Sinai, presented a proposal July 4 to Prime Minister Mostafa Kemal Madbouly and Lt. Gen. Mohamed Zaki, the defense minister and commander in chief of the armed forces. The proposal acknowledges the army's efforts against terrorism, but also presented a case for easing restrictions in the south. He recommended allowing SUVs in tourist cities after the vehicles are approved by security authorities and checked every year for proper licensing.

“Mountain tourism is one of the most important types of tourism in South Sinai [and] requires SUVs for off-road and rugged tracks inside mountains," he told Al-Monitor. “What I suggested to parliament is that we reallow the use of SUVs under the supervision of the security authorities, by [installing equipment] that would allow the authorities to track them everywhere in the valleys and mountainous roads. This is an attempt at reviving the mountain tourism in South Sinai, which has unparalleled beautiful landscape inside the mountains."

The south has a series of mountains that attract tourists from all over the world and is famous for long hiking trails, especially in the mountains of Saint Catherine and Mount Sinai. Hikes and off-road trips are still allowed in the area of St. Catherine’s Monastery, but the tight security measures require tourists to walk within a security lane, and they are only allowed to camp on the mountain or stay in the monastery for one night.

Suleiman al-Gabali, a tour guide in South Sinai, told Al-Monitor, “Mountain tourism has been a source of income for the South Sinai governorate. The area’s residents, who are mostly Bedouin, earned their livelihood from tourist expeditions and tours inside their mountainous areas. Now, all this came to a halt under the current security situation."

He added, "There have been fears that the armed militants would use the mountains in the south to infiltrate the north of Sinai. It's important, however, to distinguish between the southern and northern parts of Sinai. The south is free of any terrorist activities, while the security confrontations are concentrated in the north. The south is safe, and efforts should be made to attract tourists again."

Sara Saleh, a parliament member representing South Sinai governorate, told Al-Monitor, "The security authorities ought to loosen their grip in the south to allow tourists to come back, especially since most of the workers in the tourism sector in the governorate [live there] and are known by the security services. South Sinai residents have been very cooperative with the army.”

In a statement to Al-Monitor, Egyptian Tourism Promotion Authority head Ahmed Youssef refused to provide any statistics or other information about the number of tourists in the south. "The official authorities are reluctant to disclose such figures about tourists for fear that terrorists might target them," he explained.

Meanwhile, Maj. Gen. Muhammad Nur al-Din, the former assistant interior minister, believes the tight security measures are necessary in light of the comprehensive military operation across Sinai. He told Al-Monitor that if the terrorists are cornered in the north, they could escape to the south.

“The Sinai people have a duty toward their homeland, and they ought to support the army in the face of terrorism,” he said.