The organizers of Egypt's Cairo International Book Fair, the largest event in the Arab literary world since 1969, are branching out with smaller coastal book fairs this summer. 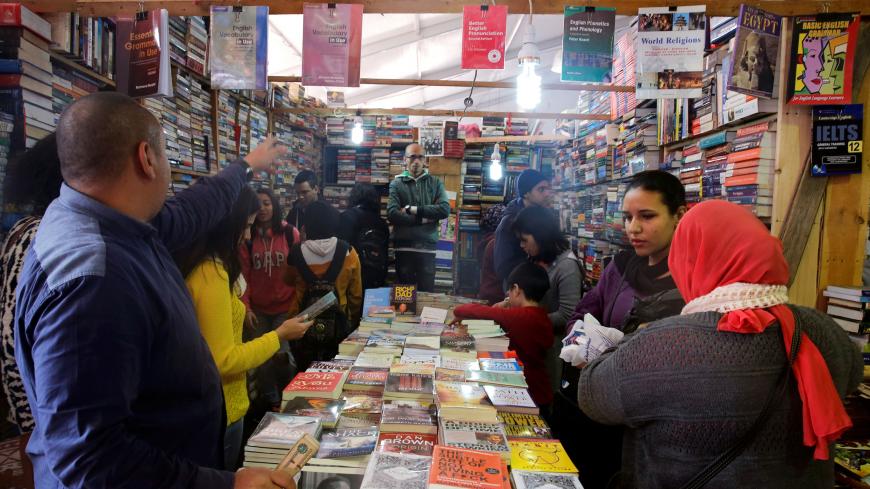 CAIRO — In a scheme to break Cairo’s monopoly over literary events and catch readers at the beach, Egypt’s General Egyptian Book Organization (GEBO), the organizer of Egypt’s iconic Cairo International Book Fair, has turned to the country’s coastal towns as new venues for summer book fairs.

The initiative was welcomed by Egypt’s literary and media circles. “A book on the beach is better than one in a store,” read the Sout al-Omma newspaper's headline announcing GEBO’s plan to hold book fairs in several different governorates and resorts throughout the summer.

GEBO opened its first local book fair at the popular Mediterranean resort town of Ras al-Bar, the country’s top summer spot in Damietta governorate. Ras El-Bar's first book fair was held near the chic Beau Rivage Hotel June 26-July 5. It was followed by the Port Said Book Fair, between July 12 and 21. Another fair, this time in the port city of Mersa Matruh, west of Alexandria, will take place in late July.

The Cairo International Book Fair was for a long time Egypt’s only book-related event. Held every January since 1969, the book fair is the oldest and one of the largest in the Arab world. Last year, it attracted more than 850 publishers and nearly 4 million visitors, leading GEBO, a government group that publishes and distributes books, to announce that it would now like to hold it twice a year, with a second one in autumn.

The smaller summer book fairs target Egyptian readers who hit the coast in the hot months. “The idea was inspired by the many beachgoers who take their books with them and spend most of their summer days reading. So why not reach out to them to spread awareness on literature by holding book fairs at the resorts?” GEBO chairman Haytham al-Haj Ali told Al-Monitor.

Haj Ali said that the book fairs in different governorates should be organized on the same dates every year so that they can become a regular part of the calendar. He also praised the cooperation of the local administrations, particularly thanking Damietta Governor Ismail Abdel Hamid Taha for allocating the central Exhibition Square of Ras El-Bar beside the Beau Rivage Hotel for the event. The 29 publishers that participated enticed readers with special discounts on the books on offer.

According to novelist Wagdy Elkomy, organizing a book fair in a resort city was a smart idea. “Taking books out to the beach is a better idea than the dull way in which the Ministry of Culture had been trying to promote reading,” he told Al-Monitor. “This is the first time the ministry has organized a cultural activity in a recreational venue.”

Elkomy said that Ministry of Culture’s General Authority for Culture Palaces, which is a government body that oversees cultural activities in the governorates, should have been the one to take the initiative and organize book fairs in summer resorts. “But since the General Authority for Culture Palaces lacks the professional mechanisms needed to organize book fairs, GEBO had to take charge. So far, it has done a great job in cooperation with governorate administrations,” he said.

The fair in Ras al-Bar included conferences and performances. Najla Suleiman, a professor of critical thinking at the Faculty of Arts at Cairo University, said she participated in a symposium discussing the book “Diary of a Tree Burner” by Ahmed El-Bassousy on July 4.

She told Al-Monitor that the fair managed to attract people with entertainment such as performances by local music and dance groups like Abdul Wahab, Noujoum al-Wadi, Damietta, Spot Light and art shows by students from Damietta’s Royal Language School, Bint al-Shati School and al-Baraem School.

“Back in the 1950s and 1960s, and maybe well into the 1970s, many Egyptians believed reading was both fun and educational. However, today’s readers get bored easily and most prefer purely entertaining activities to reading. This is why Ras El-Bar’s book fair was a success, as it took place at a fun summer destination for Egyptians on vacation. The recreational activities attracted many visitors to the fair, and some just ended up buying a book or two," she said.

Literary critic Khaled Gouda, a guest at the same symposium as Suleiman, told Al-Monitor that the smaller book fairs are a great way to break Cairo's monopoly on cultural activities and leave the other governorates less marginalized. Gouda said he expected book fairs in coastal, rural and Upper Egypt governorates to be particularly successful because residents in such areas have few cultural activities.

Engineer Ahmed Taha told Al-Monitor how happy he was to attend the book fair. Explaining that he left Damietta for five years to complete his university studies in Alexandria, he said it was his first time attending a book fair and symposium. He said he had bought “Diary of a Tree Burner” and immediately read it so he could take part in the book discussion at the fair. He also attended panels on Ras El-Bar’s history and environment.

Sociologist Ahmed Lutfi praised the book fair but pointed out some flaws. He told Al-Monitor that the book fair was not actually set on the beach but rather near the square near the Beau Rivage Hotel and thus missed the chance to be a focal point of beachgoers. “If the target is the youth, the conference should have been better promoted over social media, because that is where young people look up upcoming cultural and artistic events near them,” he said.