Diyarbakir’s book fair, one of the main cultural events of the region, had been stopped due to security reasons in 2015. Now that it is back, thousands of residents from Diyarbakir and region came to pick up a book or two. 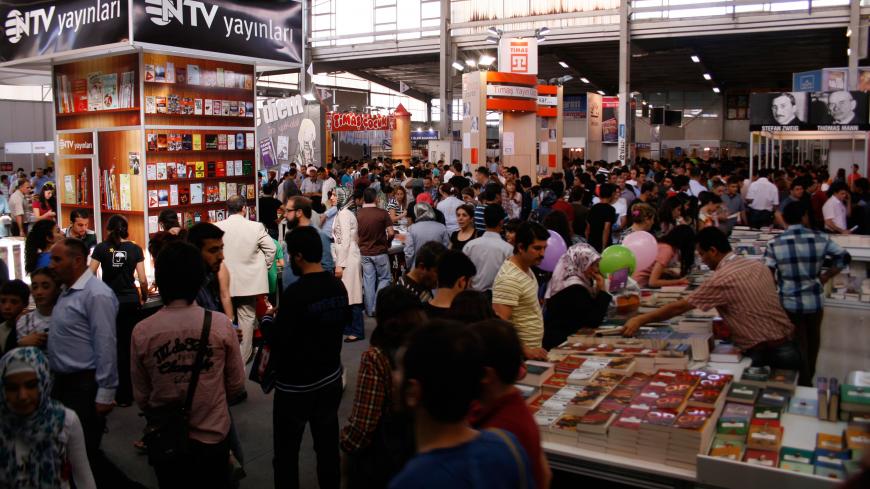 The Diyarbakir Book Fair is seen in a photo supplied by the TUYAP Fairs and Exhibitions Organization. - TUYAP

DIYARBAKIR, Turkey — Over the weekend, Elazig Street, which leads to the Diyarbakir Fair and Congress Center, was filled with cars and pedestrians — possibly reminding an onlooker of the happier times for the region more than a decade ago, when large crowds gathered on this road to celebrate Nowruz, the Kurdish New Year. But, this time, the crowds — families, young people and children — are not heading for dancing and singing but to a book fair.

The Diyarbakir Book Fair, the largest literary gathering in Turkey’s southeast since its inception in 2010, has returned to the city after a four-year hiatus. The fair had been suspended in 2015, when the organizers announced that the bombings and clashes in the city made it impossible to maintain security.

“It is a positive sign that 110,000 people turned up for this fair,” Muharrem Erbey, an author and human rights activist, told Al-Monitor. “Diyarbakir is a city that reads. I have learned that the Kurdish-language books sold well, too,” he added, referring to the stands of the 30 publishing houses that displayed Kurdish-language books.

Erbey said people’s interest in the fair was a reflection of their longing for cultural events. “In the last few years, culture has taken a back seat to conflict and to politics. The government-appointed mayors [who have replaced the elected mayors in the region and throughout Turkey] have done next to nothing on culture.”

The fair was a reflection of the political environment in Turkey. At the last fair in 2014, fair posters had been in three languages, Turkish, English and Kurdish. However, this year, posters and banners were only in Turkish, creating resentment among the predominantly Kurdish-speaking public and criticism in the local media. Unconfirmed rumors among participants of the fair indicated that some of the Kurdish publishing houses had boycotted the fair on the grounds that the posters and banners were only in Turkish.

The fair drew its largest crowds over the weekend — its last two days.

“Judging by the way they all turned up, the local people must have thought that this was the Nowruz celebrations,” attendee Kadir Karagoz, speaking tongue in cheek, told Al-Monitor. Then he added on a more serious note that this was a city where people were curious and eager to learn. “This has been the land of different books — holy or not — faiths and cultures for centuries. Yes, we are in economic difficulties now, but even then, many of the people here think that book-learning and education will help their children have a better life than they do.”

“Diyarbakir has lived through a tense period in the last few years,” he said, referring to the clashes between the Turkish security forces and Kurdish militants, the curfews and the destruction of the ancient district of Sur — the walled city — in Diyarbakir. “This is a bit of fresh air.”

It also included new-generation Kurdish writers, such as Murat Bayram, a journalist and editor of the independent news agency Bianet’s Kurdish-language section. He has released his first book of short stories, “Belki isev binive” (“Maybe she will sleep tonight”), about life in Diyarbakir during the 2015 clashes and curfews.

“The readers here are informed of the new books,” Bayram told Al-Monitor. “I saw that many of them visited the fair with a list of books that they wanted to buy. The local kids rushed to the stands with Kurdish books.” Then he added, “The fact that this book fair took place is a sign of normalcy.”

The multicultural nature of the city was reflected in the choice of the fair’s guest of honor, Turkish-Armenian writer Migirdic Margosyan. Margosyan, who was born in the non-Muslim quarter of the old city, right under the city walls, told Al-Monitor that he had been reluctant to be the guest of honor in the fair, given that he had participated ever since the beginning. “I am from the city,” he said. “I am no guest. But [the organizers] invited me and I accepted.”

“Not that I am complaining about [the organizers],” he said. “If I were to complain, it would be about the policies that made me a guest in my own city.” His words are a thinly veiled reference to the fact that his childhood neighborhood, which became the title of his book “Infidel Quarter,” was damaged in the clashes and then became the venue of a much-criticized gentrification plan.

The veteran writer also praised the attendance at the fair. “It’s good that there was so much interest after a hiatus of four years. Most people actually came to buy books, not to look around. The authors and the readers had plenty of occasions to talk to each other, too. When I talked to the readers, they mostly asked me about the Infidel Quarter — perhaps because it no longer exists.”