Has Cairo book fair lost its luster at 50?

The Cairo International Book Fair's 50th edition opens amid controversy over its new location and visitor numbers, with some booksellers boycotting the fair. 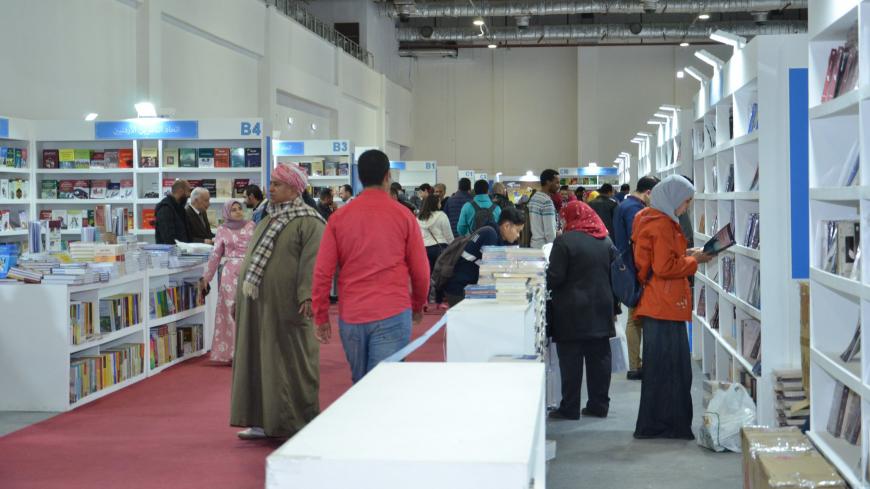 CAIRO — The Cairo International Book Fair, the oldest and largest book fair in the Middle East, celebrates its 50th anniversary under a shadow of controversy and a significant drop in the number of visitors compared to last year.

The lackluster golden anniversary of the fair is largely blamed on the decision of the fair’s organizers — General Egyptian Book Organization (GEBO), which is the executive arm of the Ministry of Culture on publishing and fairs — to move the fair from its usual venue in Nasr City in east Cairo to the new exhibition center in District No. 5 in the eastern Cairo suburbs. The decision, announced three months before the start of the fair, has been protested by many publishers, particularly smaller ones, that complained the public would have difficulty accessing this new venue. Some even spoke about boycotting the fair, but GEBO ignored calls to change back the venue to Nasr City, which is easy to get to.

Despite the high-profile inauguration of the fair’s 50th edition at the Egypt International Exhibition Center by President Abdel Fattah al-Sisi, the number of visitors seemed to prove that publishers had a point. During the first five days of the fair, which takes place Jan. 22-Feb. 5, only 1 million visitors turned up, according to a press statement Jan. 28 by Haitham al-Hajj, the head of GEBO, marking a fall from the 1.8 million during the same period in 2018.

The shiny new venue also imposed a number of regulations that made participation both more expensive and more laborious for the participants, such as restricting the entry of books to the building to five hours a day. In addition, the rental fees of pavilions in the new exhibition hall have gone up significantly from previous years, as much as double the cost of last year.

GEBO managed to ensure the participation of large publishers at this year's fair, and the number of publishing houses rose to 579, including 62 that are participating for the first time.

While major publishers are on board, many of the popular bookstores — particularly those that sell used books at low prices — are conspicuously absent. These include the booksellers of Sour El-Azbakeya and El-Fagala from Cairo and Al-Nabi Daniel bookstore from Alexandria. Sour El-Azbakeya is one of the country's oldest book markets where students can buy used books at low prices. Their large stock includes science and foreign-language books as well as rare old editions.

Instead of attending the fair, these secondhand bookstores announced Jan. 8 that they would hold their own smaller-scale fair at the traditional book market of Sour El-Azbakeya. The “alternative fair,” which started Jan. 15 and is scheduled to run until Feb. 15, proved to attract a large number of visitors in the first two weeks, several Arab and Egyptian newspapers reported.

Asked whether the new venue and the absence of the secondhand booksellers caused a drop in the number of visitors to the fair, Shawkat al-Masry, member of the Supreme Committee of the Cairo International Book Fair, told Al-Monitor that the turnout had not only been high but the people who came back actually bought books.

He added, “When the fair was easier to access in previous years, many used to make a casual visit and not buy books. The only way to talk about the success or failure of the exhibition is through book sales.”

He said that he believed the number of visitors had actually increased after the concerns on accessibility had been addressed by providing special buses to the new venue.

Wael Salah al-Mulla, owner and director of Masr El Arabia publishing house, one of the largest publishers to participate, also told Al-Monitor that the fair this year had “exceeded all expectations.”

Acknowledging that there had been initial concerns and complaints about rental fees, Mulla said that these could be avoided in the coming years. He noted that the decision by GEBO to provide transportation to the new exhibition location was a great step that made the exhibition one of the best in the Arab world.

But some other participants are more critical. A source from Dar al-Rashad, a Moroccan publishing house, told Al-Monitor on condition of anonymity that the 50th edition of the book fair was far from a success story. “Despite the luxurious halls and new pavilions and the government’s provision of cheap transportation, the increasing rental fees have turned the exhibition into a destination for [a much smaller group of participants] that can pay the higher rental fees,” the source said.

He noted that to make the event profitable despite the high fees, the book publishers and sellers had to reduce the book discounts. “Only the state-owned publishing houses are able to offer high discounts to customers,” he said.

Sayed Darwish, a bookseller at Sour El-Azbakeya, told Al-Monitor that the absence of secondhand bookstores was what the larger publishers wanted anyway. “When GEBO realized that most publishers opposed moving to the new exhibition center due to the high cost and the anticipated low turnout, it decided to keep major publishers happy by [making it difficult] for secondhand sellers to rent pavilions,” he said, implying that the large publishers had been able to monopolize the 50th Cairo International Book Fair.

Darwish said, “We could not participate in the exhibition. As our books are the only cheap alternatives to those sold by the major publishing houses, they have benefitted — despite the high rent and low turnout.”

Ezzat Abdul Hamid, one of the visitors of the fair on its fourth day, told Al-Monitor that both booksellers and visitors would get used to the new venue. “Moving the fair to District No. 5 was a huge organizational step, and it is normal for the costs to rise and for some visitors not to show up. But they will get used to the new place gradually,” she said.

She called on the traders of Sour El-Azbakeya to collaborate in order to ensure their presence in the next fair, and on the organizers to offer facilities to El-Azbakeya traders because they are the only affordable alternative amid the ever-rising book prices.

“It is not GEBO that is responsible for the ever-rising cost of books; neither is it due to the monopoly of the large publishers. Everything has been getting more expensive in Egypt since 2016,” she concluded.