In Egypt, book prices have doubled or tripled in the last few years, driving people to secondhand book stalls in Soor al-Azbakeya. 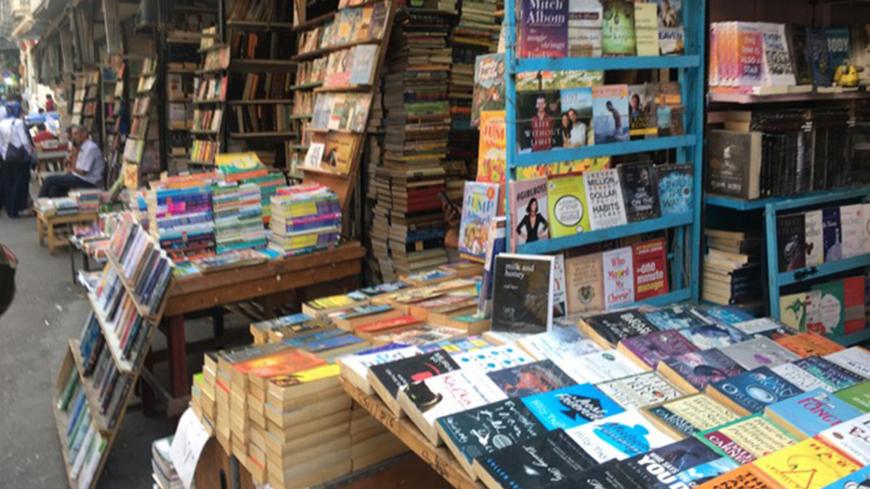 More than 130 bookstalls form a maze of books at Soor al-Azbakeya, one of the largest secondhand book markets in Cairo, Aug. 1, 2018. - Rasha Mahmoud

Some 130 bookstalls form a winding maze that hides the cheapest bargains and rare antique books at al-Sadd street, in Cairo’s al-Sayeda Zainab neighborhood. Located 200 meters (656 feet) from the Attaba metro station, the wooden stalls give off the distinct smell of old paper and dust.

The market of Soor al-Azbakeya, located near a public garden that carries the same name, is one of the most famous secondhand book markets in Egypt.

Young and old, rich and poor rub shoulders in front of the bookstalls — the clientele includes young students, elderly people with a passion for old books, modest buyers who think twice before purchasing one book or extravagant customers who walk off with a dozen, some in rare editions. Low-income families visit the market to buy extracurricular textbooks to help their children improve educational and academic performance. The largest and most regular group is students, teachers and researchers who dig into old books and documents in search of a special topic — most of them are well-known among the vendors.

The greatest advantage of the market is its low costs. According to the reports in the local media, the price of raw materials for printing has generally risen by 100% and even 150% since 2016. This means that the price of books has doubled in Egypt over the last two years. But prices at Soor al-Azbakeya have remained mostly unchanged over time.

Another advantage is coming across rare documents of the past. Am Harbi, the owner of one of the oldest bookstores in the Soor al-Azbakeya market, has a passion for collecting old magazines and newspapers. In his 70s, he has long collected and sold decades-old issues of Egyptian periodicals, which in the early 20th century were the only medium for the public to get political, social and economic news.

Am Harbi’s stand carries the novels of famous Egyptian writers, such as Naguib Mahfouz and Anis Mansour — who were past patrons of his wooden stalls, where they would pick up old issues of some famous magazine or other.

The book vendors change very little. “When the owner of one of the bookstalls dies, the books will pass to another passionate book lover, end up in a library to be used by researchers, or sold by weight by the heirs to book merchants and sidewalk vendors,” Ahmed Jamal, a graduate student at the Faculty of History at the University of Cairo, who is a regular visitor to the market, told Al-Monitor.

Selecting three books from one of the stands, Jamal continued, “Soor al-Azbakeya is a permanent book fair in the heart of Cairo. Here we can buy dozens of books for our studies. I usually find here what I don’t find in large bookstores and for a tenth of the price. I am majoring in history and I always find what I need for my research here. Plus, the sellers here are educated. They know what I am looking for and help me find it. They appreciate the value of ancient books.”

Mohammed Ibrahim, a bookseller in his 60s, told Al-Monitor that Soor al-Azbakeya has a long history. Pointing out that the district had been developed in the 15th century by Izz al-Din Aybak, the commander of Sultan Qaitbay's army, Ibrahim said that the public garden had been built, along with stables and a residence, for the commander himself.

In the 19th century, the district had become the meeting spot of intellectuals, writers and artists, who met at the local cafes. The booksellers started bringing their wares to the area in the 1800s. In the beginning, only a few sellers would bring in a small stock of books and sell them at intellectuals' cafes such as Reesh Cafe, Zahrat Al Bustan and Mattatya. At midday, when the cafes closed their doors, these book vendors would head to the Midan Opera, also known as the Royal Opera, to rest under the shade of the trees that filled the square back then. As years went by, Hamdi Seif el-Nasr Street separating al-Azbakeya Garden and the Royal Opera House became a place where an ever-growing number of merchants would display their merchandise to passers-by.

Ibrahim added, “Over time, book vendors settled in the area. While this seemed strange at the beginning, Soor al-Azbakeya book market continued to expand. But these vendors were chased away by the authorities, who did not like the market’s proximity to the Royal Opera House. Sometimes the vendors would even be hosed down. But they refused to leave their market. Ultimately, Mustafa Nahhas [prime minister between 1950-52] granted permits to the booksellers to sell their books at the Soor al-Azbakeya market.”

Art history researcher at University of Cairo's Faculty of Arts, Mohamed Zain al-Abidin, told Al-Monitor that he bought his first book at the market more than 50 years ago, “I bought my first book from this market from my own allowance. I was in middle school and felt that I had just stepped into Ali Baba's cave. I fought the urge to buy as many books as I could, even those that I did not need.”

“I lived in Alexandria then, but every time I visited Cairo, I also visited the book market with my father and bought some books. During my undergraduate studies in Cairo, my books, magazines and some historical journals and old historical newspapers were from Soor al-Azbakeya.”

Zain al-Abidin went on, “Soor al-Azbakeya was the steppingstone for building my own library. I felt that the old yellowed papers were as soft as a baby’s skin. I learned from the first book that I read 'The Cheapest Nights' by Yusuf Idris — an old book with weather-beaten pages — that it was not wrong for people to cry of poverty.”