The high number of visitors to the Cairo Book Fair, the second largest of its kind in the world, came as a pleasant surprise. 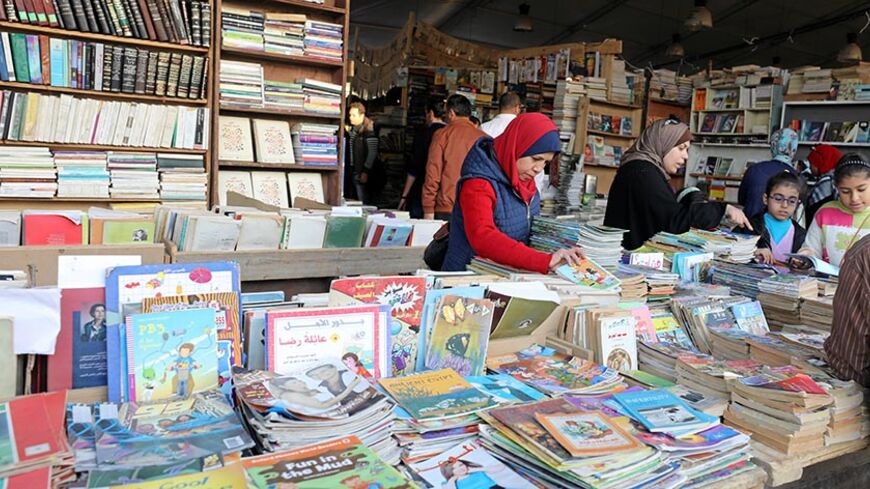 People browse through books on a stand at the Cairo International Book Fair, in Cairo, Feb. 9, 2017. - REUTERS/Mohamed Abd El Ghany

Egypt has launched the region's largest book fair late last month despite hard economic times, which have led to a decline in the number of publishers as well as dwindling book sales.

The 48th Cairo International Book Fair opened on Jan. 26, with 670 publishers from 35 countries. The countries have included 16 from the Arab world, six from Africa and 13 from other parts of the world.

This year's fair, which will run through Feb. 10, has had about a hundred fewer Egyptian publishers and 50 fewer Arab publishers than last year.

Last year saw a record number of participating publishers totaling 850 from 34 countries. This year, a total of 670 publishers, including 451 Egyptians, 200 Arabs, 13 international and six from African countries, took part. Publishers last year totaled 550 from Egypt, 250 from the Arab world and 50 foreign publishers.

The industry has been affected by the flotation of the Egyptian pound, which pushed up prices of printing material such as paper and ink.

Adel El-Masry, one of the publishers and a participant at the fair, said book prices have increased by 25% in this year's fair, adding that it will dramatically soar further after the end of the major book event.

"Book prices should have jumped by 100% compared to last year, because of the pound flotation. But publishers have decided to increase prices by just 25-30% to draw in visitors,” Masry told Al-Monitor.

Masry also said that despite the price increases, book sales have declined by only 5% compared to last year. "We did not expect that at all. We forecast that the sales would go down by at least 40-50%. The sales went beyond our expectations as we thought that people would not be able to afford the books following the flotation and the surge in inflation rates," he added.

In November last year, the Central Bank of Egypt floated the pound, devaluing it by 32.3% in a move to rebalance currency markets after weeks of turbulence. The pound flotation came as part of an economic reform program undertaken by the government to stimulate economic growth and draw in additional foreign investments.

Following the flotation, Egypt's consumer prices rose by 19.4% year-on-year in November, accelerating from a 13.6% growth in October. It was the highest inflation rate since November 2008 and the first reading since the Central Bank floated the currency and hiked fuel prices. The urban consumer price inflation jumped for a second month in December to 23.3%.

"Economic conditions will cast a long shadow over the country's book industry in the coming months," said Suliman Tabu, a writer and a member of the Arab Writers Union. Tabu told Al-Monitor that the publishing process has become very costly. "All materials that are used in the publishing process are imported from abroad, including printing and paper prices. And there the publishers find themselves in hot water. Publishers want to increase book prices by 100%. But if they did, customers would refrain from buying books."

Tabu also expected several publishing houses to close their doors amid the country's worsening economic conditions and a declining demand for books. However, he added that some other publishers may turn to e-publishing to avoid soaring prices of printing materials.

"The government has to interfere and salvage the book industry," Tabu said, suggesting that the government lift custom duties and taxes on materials imported from abroad, especially those related to printing.

In this year's fair, several cultural campaigns have been launched to draw in book worms. A drive, titled "A Book for Every Student," has been launched to offer books to students nationwide with a discount of 90% on every five books. The fair has been held this year under the slogan of "Youth and Future Culture." An electronic application called "Am Amin" has also been released for the third year in a row to provide smartphone users with the database of the fair, its locations, books, publishing houses and a map for the fair.

Haitham El-Hag Ali, the head of the General Egyptian Book Organization, said that despite the challenges, visitors to this year's fair exceeded 1 million over seven days.

"I cannot miss the Cairo book fair. It is a must for me since I was young," said Ismail Hafez, a 58-year-old visitor to the fair. Hafez told Al-Monitor that he usually goes to a booth called "Souk el-Azbakiya" (Azbakiya Market) which sells cheap, second-hand books. "I think with the ongoing economic conditions people should not stop reading books. However, they should continue to read, and they can find books that are cheap and original at the same time," he said.

The fair is also significant as Cairo-based publishers produce an estimated three of five Arabic-language books printed in the world, and the state-owned General Egyptian Book Organization, which organizes the fair, is the largest book publisher in the Arab world.

The fair features booths and speakers from government agencies and private publishers from around the world, as well as retailers of books, videos and other media. Lectures, readings and other public events occur during the period of the event and material is presented in Arabic, English and other languages.