Manbij plan raises expectations but not mood in US-Turkey relations

Just days after Ankara and Washington announced their agreement on a road map for Manbij, Syria, differing interpretations are threatening setbacks in their fragile progress toward rebuilding ties. 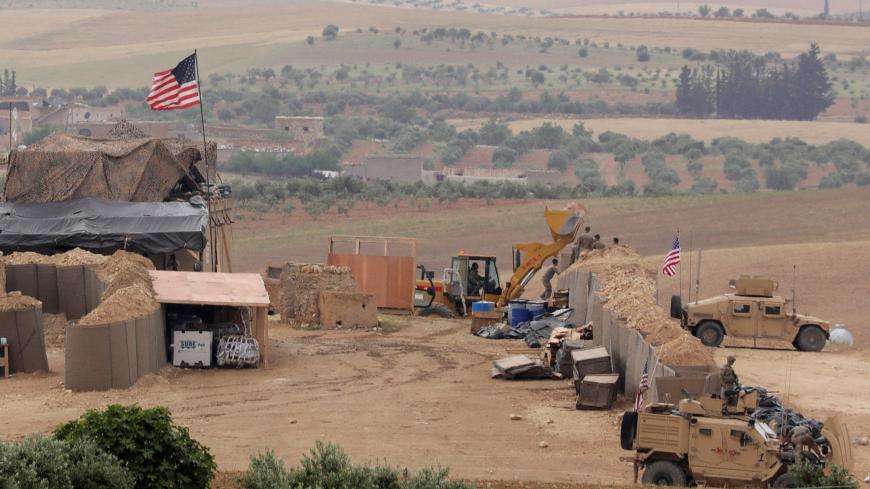 The ink on a road map for the Syrian town of Manbij announced Monday between Turkey and the United States has barely dried. But differences in interpretation as to its actual substance are already casting a shadow over the latest stab at salvaging US-Turkish ties and rekindling trust between the two countries. They could result in things getting worse, not better, some analysts warn as Washington grapples to balance ties with Turkey, a critical NATO ally, and its Syrian Kurdish partners in the fight against the Islamic State.

Secretary of Defense James Mattis underscored the difficulties, telling reporters en route to Brussels today that Syria is the “most complex battle space” he has ever seen. “We are working with Turkey to try and address their concerns — at the same time defeat [IS]. And it’s a very difficult job, I’ll be the first to admit. … We’re working it, and we’re ranking it with Turkey, not against Turkey.”

But Turkey’s patience is wearing thin. The administration’s policy of pursuing military cooperation with the Syrian Kurdish Protection Units (YPG) with vague promises of continued support while assuring Ankara that the ties will end once IS is well and properly defeated rings increasingly hollow for Turks and Kurds alike.

Ragip Soylu, Washington correspondent for the pro-government Turkish daily Sabah, conveyed Turkish displeasure in a column today, claiming that the US administration's duplicity was fully on display during a June 5 background briefing by two senior State Department officials on the Manbij deal.

Soylu wrote, “While one senior American official was trying to underline the US commitment to decrease tensions and stabilize relations with Turkey, the other one — probably the unhappy one — was trying to diminish the importance of the road map and repeatedly reminding everyone [of the] obvious: It wouldn’t be easy to do it.”

The backgrounder follows Monday’s meeting between Turkish Foreign Minister Mevlut Cavusoglu and Secretary of State Mike Pompeo. The pair announced they had endorsed a blueprint for security and governance structures in Syria's mainly Arab town of Manbij. Manbij has come to embody the distrust engulfing Turkish-US ties because the United States failed to deliver on promises that the YPG would withdraw from the town after it was wrested from IS in August 2016. However, the belief of the YPG and some US officials that Turkey would be forced to swallow this reality, albeit kicking and screaming, rapidly unraveled. Turkey invaded neighboring Jarablus when the YPG made a play for it. In this sense, the Manbij deal is meant to rewind the clock, and it's easier now that the fight against IS is drawing to a close. But as Afrin showed, Turkish moves against the YPG can torpedo the final stages of the anti-IS campaign, and what if it follows through on its threats that “Manbij is next?” Cavusoglu told reporters Tuesday that Afrin served as a wake-up call for Washington, prompting it to devise the Manbij plan.

As Turkey sees it, the accord foresees the withdrawal of the YPG from Manbij and eliminating the group’s political arm from local governance. US and Turkish military officials would work out the technicalities in the coming days, paving the way for US and Turkish patrols to monitor the area, a template that Cavusoglu argued needed to be replicated across the northeastern territories where the YPG and its affiliates govern under the protection of the US-led coalition.

In the background briefing cited by Soylu, one of the US officials seemed to suggest, however, that the scope of the Manbij road map — more a framework for cooperation than a hard and fast agreement — was more modest. Its main purpose was to fend off potential armed confrontation, presumably between Turkey and the YPG and its Arab allies through deconfliction measures rather than a wholesale reconfiguring of the US-led coalition’s partnership with the YPG.

“The benefit to everyone is that you have a stable environment and you don't have a threat of pending military offenses or military action, and that’s what we want to get off the table,” one of the officials said. The second official stressed the deal was a “conditions-based agreement,” without specifying what those conditions were.

Ankara’s hopes are currently pinned on President Donald Trump, who, according to Turkish officials quoted by Soylu, “pushed the US diplomatic and military bureaucracy to fall in line” after Trump’s numerous telephone exchanges with his Turkish counterpart Recep Tayyip Erdogan. “Turkish officials largely credit President Donald Trump’s personal intervention for renewed US commitment to find a mutually agreeable solution to the crisis.”