The Washington meeting between Turkish Foreign Minister Mevlut Cavusoglu and US Secretary of State Mike Pompeo may mark a turning point in troubled US-Turkey ties. 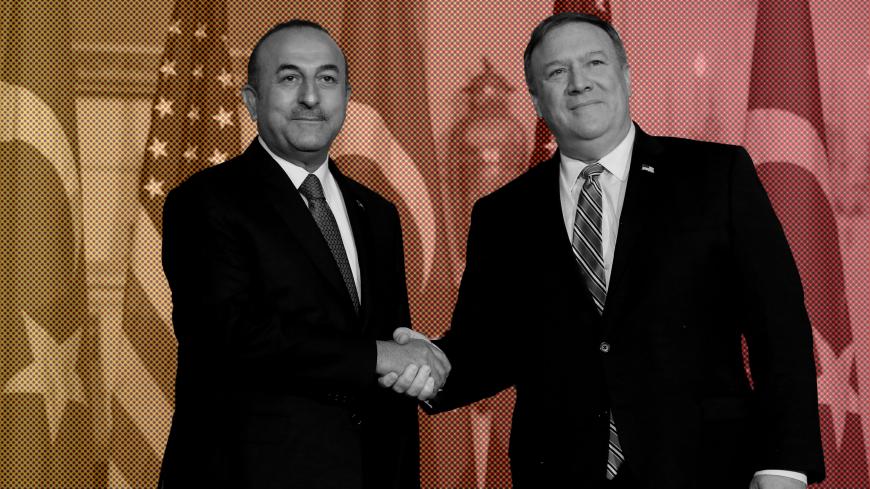 Answering reporters’ questions in the Turkish city of Antalya today, an upbeat Cavusoglu elaborated on an agreement reached between the NATO allies on Manbij, a mainly Arab town in northern Syria. Manbij has been an abiding source of friction because of Kurdish influence over its administration. Cavusoglu termed the deal “an opportunity to put our damaged relations back on track.”

Cavusoglu said provisions of the plan would likely be fulfilled in less than six months but that the real test of the United States’ commitment to it rested in its implementation. The terms include a full withdrawal of the Syrian Kurdish People’s Protection Units (YPG) from the city and assurances they will be shorn of any weapons provided to them by the US-led coalition for the fight against the Islamic State (IS). Likewise, the civilian authorities are expected to be purged of pro-YPG elements, clearing the path for Turkish forces to monitor the area jointly with their US partners. Cavusoglu stressed the accord was “beyond a legal document" and "a road map that will affect relations between [our] two countries.”

The YPG appeared to be cooperating. In a statement, the group said its “military advisers” would leave Manbij, but that they would “heed the call when necessary to offer support and help to the people of Manbij should it be needed.”

Turkey’s state-run Anadolu News Agency, however, appeared to contest the YPG’s statement, reporting, “Local sources told Anadolu Agency on Tuesday that YPG/PKK terrorists were still hiding out both in the city center and in outlying districts.”

The decision to cooperate in Manbij follows months of aggressive lobbying by Turkey for the United States to axe its alliance with the YPG because of its close links to the Kurdistan Workers Party (PKK). The PKK has been waging a bloody campaign for self-rule inside Turkey since 1984 and is formally designated as a terrorist group by the State Department. Turkey’s demands escalated to threats to take military action against the YPG despite the presence of US special forces in the areas under its control.

Turkey’s military invasion of Afrin earlier this year proved the threat isn't more hollow rhetoric. Paired with Turkey’s growing cooperation with Russia, Afrin may well have helped tip the balance in favor of those administration officials, particularly in the State Department’s Bureau of European and Eurasian Affairs, who have long argued that partnership with the YPG ought not come at the expense of strategic ties with a critical regional ally. With the fight against IS gradually winding down and President Donald Trump opposed to a prolonged American presence in Syria, the YPG’s star appears to be fading despite the best efforts of its diehard fans within the US Central Command.

The YPG is the most reliable and effective force within the Syrian Democratic Forces, which groups Kurds and Arabs fighting IS together with the US-led coalition. Some administration officials continue to air skepticism about how or whether the Manbij agreement could work on the ground. The local population remains especially leery of any return of Turkey’s Free Syrian Army allies, who governed the town before IS took over. Residents interviewed by Al-Monitor in September said the period was marked by violence, looting and corruption.

Cavusoglu alluded to disagreements in the administration today, saying, “There were different statements coming from different departments and this disturbed us, [but Pompeo] was CIA director and he understands our sensitivities very well.”

Signs are that the SDF does, too. An SDF official in northern Syria contacted via WhatsApp told Al-Monitor, “We have already been making some changes to de-escalate tensions with Turkey.” These efforts include scaling down the presence of PKK “advisers” and removing banners and other symbols evoking the PKK and its imprisoned leader Abdullah Ocalan in Arab-dominated areas. “We wish to pursue our partnership with America,” he said. But he acknowledged that the ground was shifting. “The [American] commanders here tell us they want to continue with us but that it's the White House, not them, making all the decisions.”