Syria's not waiting for peace to rebuild, and Iran wants to help

There's a lot of talk about reconstructing Syria, but at the moment, Iran seems to be the only country actively working toward that end. 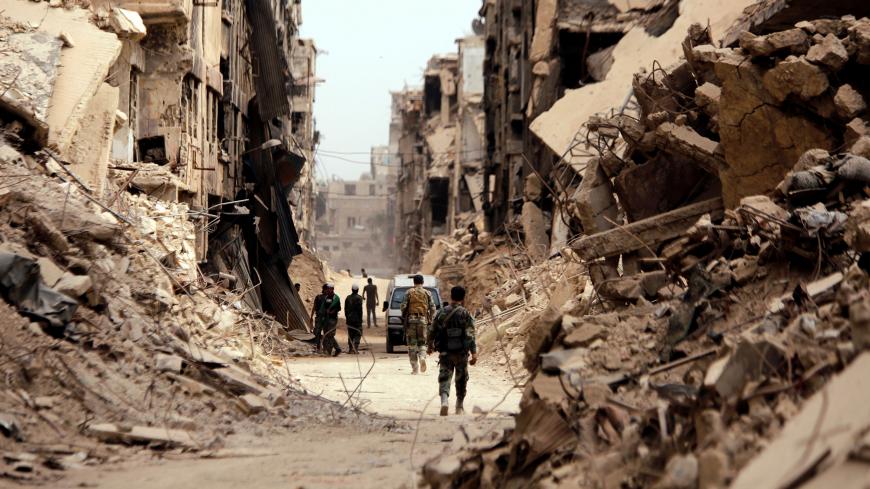 Soldiers walk past damaged buildings in the Palestinian refugee camp of Yarmouk, south of Damascus, Syria, May 22, 2018. - REUTERS/Omar Sanadiki

Taking full control of the capital city of Damascus and the surrounding area for the first time since the civil war broke out in 2011 has given the Syrian regime new impetus. That success also allows it to approach reconstruction of infrastructure and cities. This comes despite a lack of any signs of a political solution to the conflict, save an agreement by the opposition and regime to form a constitutional committee.

Syrian regime forces and their allies managed to extend their control in April over the last parts of the Palestinian refugee camp of Yarmouk just south of Damascus. Relatives of Islamic State militants who controlled the camp headed to the desert as part of a deal between the parties. The northern province of Idlib and parts of the southern region in Daraa and Quneitra remain under the control of opposition forces, subject to a de-escalation agreement with the regime.

Reaching a political solution and the success of the Geneva negotiations is a fundamental European condition for the international community to participate in the reconstruction process, along with donors and international financial and monetary institutions. The European Union's High Representative of the Union for Foreign Affairs and Security Policy, Federica Mogherini, had said in April that the EU is ready to participate in financing when the United Nations peace process is underway.

UN Special Envoy for Syria Staffan de Mistura has estimated that rebuilding Syria will cost about $250 billion, but Syrian estimates put the figure at $400 billion, with officials saying the process could take as long as 15 years. Sergey Katyrin, head of the Russian Chamber of Commerce and Industry, estimated last year the cost of rebuilding could range between $200 billion and $500 billion.

During a May 18 meeting with Syrian Prime Minister Imad Khamis in Damascus, Akhoundi stressed “the readiness of the private and public sectors in Iran to participate extensively in the reconstruction phase."

He said, “Iran and Syria are now preparing to convene a joint committee headed by the Syrian prime minister and Iran’s first vice president to sign a document for strategic, long-term cooperation.”

On April 2, Assad issued a controversial law granting municipalities control over the property of the displaced without their consent or presence. In addition, it gives municipalities the freedom to use the property unless the original owner proves his ownership within a year.

Syrian Minister of Local Administration and Environment Hussein Makhlouf announced April 8 that the Bab Amr area in Homs, various residential areas in Aleppo and the entrance of Damascus from Harasta are subject to the new law. Residents of these areas took to the streets in protest.

That law, and a decree giving the Finance Ministry control over the property of those accused of supporting terrorism, as well as some other laws are “a series of procedures set by the regime to give the confiscation process a legal nature,” Bassam al-Ahmad, director of Syrians for Truth and Justice, told Al-Monitor. The nongovernmental organization in Istanbul documents human rights violations in Syria.

Tehran is trying to take advantage of the new legislative and legal environment while exploiting the Syrian regime's desire for Iran to participate in the reconstruction. Ahmad, however, doubts Iran’s ability to do so “due to the US sanctions imposed on it."

"But when it comes to Russia and China, things are different. I think that China will be ranked as the No. 1 state capable of rebuilding [Syria]," he added.

Chinese Foreign Minister Wang Yi had said in a November meeting with Assad adviser Bouthaina Shaaban that his country will help in the reconstruction.

Ahmad, speaking about initiatives Iran is trying to promote in cooperation with the regime, said, “Iran is like any country trying to increase its influence. Iran’s ambitions in Syria are historical and go way back. The reconstruction dossier will help it make its way into Syria and secure influence there.”

He pointed out, “Iran and other countries will have a role to play since they will give the Syrian government funds and loans, and thus will have influence on decision-making circles within the regime.”

The Syrian opposition, meanwhile, is concerned that the regime plans to bring about further demographic change by enforcing a displacement policy, as happened in eastern Ghouta, Damascus and other areas. Ahmad noted, “The goal may not be a demographic change on a sectarian basis, but rather on a political basis, by creating an environment loyal to the regime and the Iranians.”

Reconstruction has yet to start in the areas the regime has evacuated, such as Daraya and Zabadani in the countryside of Damascus, as well as the eastern part of the city of Aleppo. After taking control of these areas, the regime merely started planning the reconstruction process, while local and Iranian associations began purchasing destroyed and damaged homes to rebuild them.

Iran’s accelerated activity and its openness to the reconstruction, in addition to the laws allowing for property seizure, will continue to threaten the smooth return of Syrian refugees — all the while keeping host countries such as Germany and Lebanon, which are ready to return them, up at night.

Meanwhile, Human Rights Watch has called on donor countries, investors and humanitarian agencies operating in government-controlled areas to ensure that their funds do not contribute to violating the property rights of residents or displaced persons, or to supporting violators of human rights and international humanitarian law.