The Islamic State escalated its attacks in northern Syria, taking advantage of the infighting between the Syrian armed factions controlling the areas there. 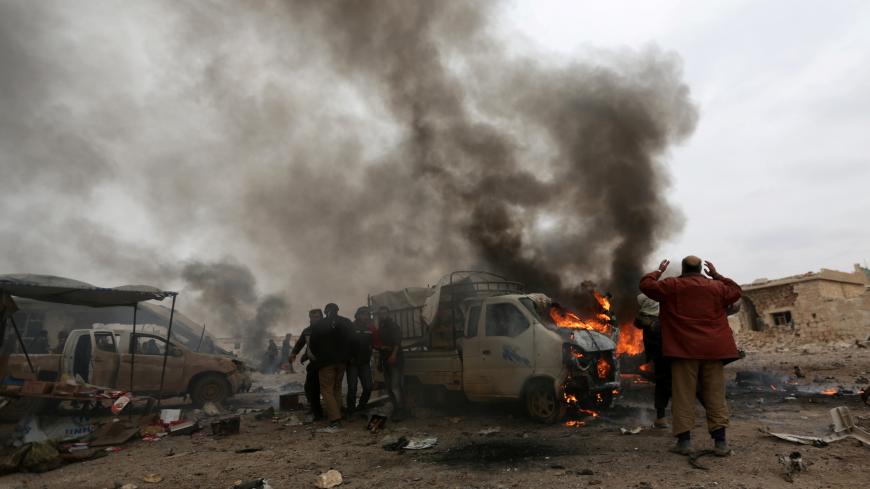 ALEPPO, Syria — Explosions of car and motorbike bombs have been recurrent events in northern Syria lately. The Islamic State (IS) has also executed the members of pro-opposition armed factions, especially in Idlib and the northern Aleppo countryside, taking advantage of the lax security situation since April.

The areas that are not controlled by the regime in northern Syria have been under joint control by Hayat Tahrir al-Sham (HTS) and other armed factions. These areas, including Idlib province and the countryside of Hama and Aleppo, have a population of 3.7 million people, according to the Humanitarian Response Coordinator, a charity in northern Syria.

The armed factions have been working together with HTS to maintain security in these areas over the past years.

Of late, however, IS cells have emerged and have been active in assassinations and car bombings. The infighting between HTS and the Syrian Liberation Front gave IS even more leeway to carry out its operations under lax security measures.

On June 21, a motorbike bomb went off in the city of Idlib, followed by another car bomb near al-Tawheed Mosque and the Carlton building, leaving several dead and wounding others.

An improvised explosive device (IED) exploded June 20 in the town of Maarat al-Numan in the Idlib countryside, causing severe material damage without any civilian casualties. Several civilians, however, were wounded when an IED went off on the Kansafra-Balyun highway June 18.

In the same vein, three people were killed and others wounded in an IED explosion June 17 on the Darkush-Ayn az-Zarqa road in west Idlib. A car bomb explosion shook the center of the city of Manbij in eastern Aleppo countryside June 14, causing material damage. On the same day, another car bomb exploded in Jarablus, northeast of Aleppo, resulting in considerable damage without any civilian casualties.

Deputy Commander of the Free Syrian Army Khalil Ismail Arsan and his son were assassinated in eastern Idlib countryside June 18. One day earlier, June 17, an HTS member was shot dead by gunmen on the Damascus-Aleppo international road.

Following the uptick in IS activities in northern Syria, the Sham Legion and HTS carried out a large-scale security operation in the countryside of Idlib and Hama. On June 18, they dismantled several IS-affiliated cells in the town of Murak in the countryside of Hama and the towns of Salqin and al-Dana in Idlib province.

A shootout broke out June 4 between HTS and more than 25 IS members of Iraqi nationality, who were living in the Kafr Hind village in the countryside of Idlib.

Osama al-Shami, an HTS security official, told local media outlets that the operation lasted more than 12 hours and resulted in the killing of 22 out of 26 IS members and the arrest of four others. HTS managed to confiscate 40 Kalashnikovs, PK machine guns, various ammunitions and M72 LAW rocket launchers.

IS retaliated June 9 by slaughtering three HTS members after having kidnapped them from Idlib on the road connecting the town of Ariha and al-Mastumah.

Activists in the city of Idlib believe the current state of insecurity is the result of internal conflicts between the different armed factions, as well as the infighting between HTS and the Syrian Liberation Front, which has been ongoing since the beginning of this year. The fighting ended in a cease-fire agreement between the two sides April 25.

“We, as activists, blame the armed factions for the state of insecurity in northern Syria," Mumtaz Abu Mohammed, a media activist, told Al-Monitor. "IED and car bombs explosions as well assassinations occur almost on a daily basis. The urgency of the situation necessitates real cooperation and coordination between the armed factions in northern Syria to address the security situation, which is affecting our daily lives. Many innocent people have been killed. Although many IS members have been captured, things have not improved much, as car bombings and assassinations continue.”

The car bombings and assassinations are carried out in precision with the use of silenced guns, indicating that IS is on top of the operations. Although the armed factions were able to capture several IS elements in Idlib and elsewhere, these operations are still ongoing, which begs the question about the real number of IS members present in northern Syria.