Syrians evacuated from eastern Ghouta have found new life and work in Idlib, where few still rely on aid and charity organizations. 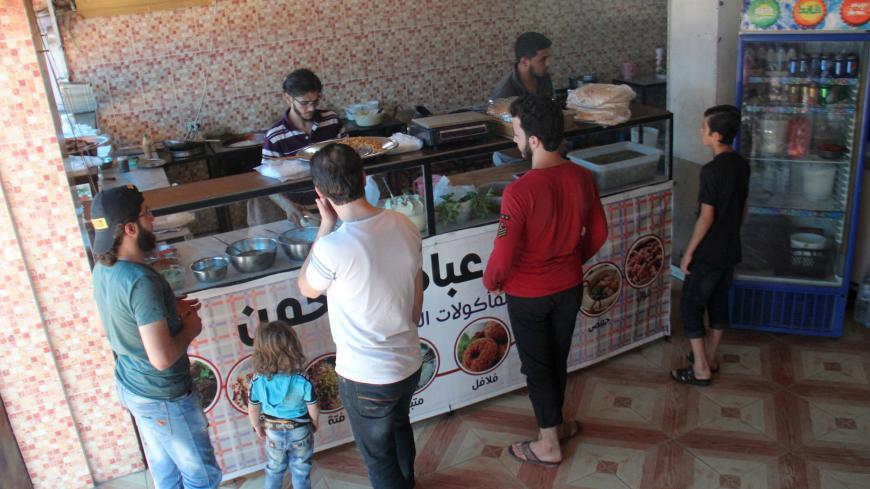 Syrians stand in line at Ibad al-Rahman's Damascene Delicacies, one of many businesses started by displaced people who have turned part of Idlib into a 'Little Damascus,' Idlib, Syria, July 19, 2017. - OMAR HAJ KADOUR/AFP/Getty Images

ALEPPO, Syria — Abu Suleiman, from al-Maliha in eastern Ghouta's Rif Dimashq, is currently residing in the town of Kafr Nabl in the Idlib countryside. He works in a bakery that he opened with the help of a local resident and is able to support his family of five.

Abu Suleiman’s family came to Idlib with the fourth batch of the tens of thousands of internally displaced persons who left eastern Ghouta during March, escaping the siege by the Syrian regime imposed in 2012.

Abu Suleiman chose Kafr Nabl as a second home and was able to quickly adapt to his new surroundings and situation. He befriended the residents of Kafr Nabl, much like other people from eastern Ghouta who settled in the city. He wanted to work and managed to open his own bakery to make Damascene pastries with the financial support of a well-off Kafr Nabl resident.

Abu Suleiman told Al-Monitor, “We were part of the fourth batch of people to leave eastern Ghouta. My extended family is made up of 25 people. We got off in Kafr Nabl and we decided to settle here. It was necessary to find work to support our women and children, and with the help of a resident, we managed to rent a shop about a month ago for $150 a month. My friends and I have been baking Damascene pastries for a while, so we knew how to equip the shop so we can work effectively.”

He added, “We Syrian people love to work; it’s in our nature. We always work hard to make a living. We have had some very bad experiences in eastern Ghouta under siege — shelling and starvation, what have you — so we forgot what it was like to have a life. We thought we could die at any moment.”

He continued, “When we were finally able to leave and settled in a relatively stable town where goods are available, we started seeing life from a different perspective. We do not want to live off aid provided by humanitarian organizations or the well-off residents here. We want to work and earn our money. Thank God we were able to do so.”

Abu Suleiman noted, “There are many internally displaced persons from eastern Ghouta who come to us every day and buy Damascene pastries, in addition to residents of the area. Everything is going well. We live as if we were at home and we hope security and safety will prevail in all Syrian areas so people can go back to their normal lives.”

According to the nonprofit Humanitarian Response in northern Syria, 83,214 people were displaced from eastern Ghouta, and most of them settled in the countryside of Aleppo and Idlib. They lost everything, and locals in the areas they settled in were happy to help them start over.

There are a number of humanitarian organizations operating in northern Syria, providing food assistance to internally displaced persons from eastern Ghouta and from the northern countryside of Homs. Nour Awad, spokesman for Violet Syria, an independent organization operating in Idlib, told Al-Monitor, “Violet provides food aid to the approximately 5,000 families of internally displaced persons from the northern countryside of Homs and eastern Ghouta, … enough to feed a family of four for a month.”

Resident Abu Ali has provided several young men from eastern Ghouta, Abu Suleiman included, with financial help so they can take their first steps into the town’s labor market. He told Al-Monitor, “We are all brothers from the same motherland. We share the same concerns and we are all the same. Each and every resident who is able to help out our brothers from eastern Ghouta should do so. Helping them find work is better than all the money we could give them because this will be good for them on the long run should they decide to stay here.”

He added, “I decided to help Abu Suleiman so he would not have to be dependent on anyone. He can rely on himself. He does what he does very well and the money I gave him is more of a loan. He can pay me back whenever, so long as he gets back on his feet and is able to provide for his family.” He did not specify how much he loaned Abu Suleiman.

Abu Ali noted, “I wish every person able to help financially would do the same as I did. When we help each other out, we can achieve anything. We can rebuild all that was destroyed during the years of war. Sooner or later, humans will be rewarded for everything they do on earth.”