Turkish military patrols in the demilitarized zone in Idlib haven't kept the Syrian regime from shelling the area, and a Syrian opposition faction says it will respond in kind. 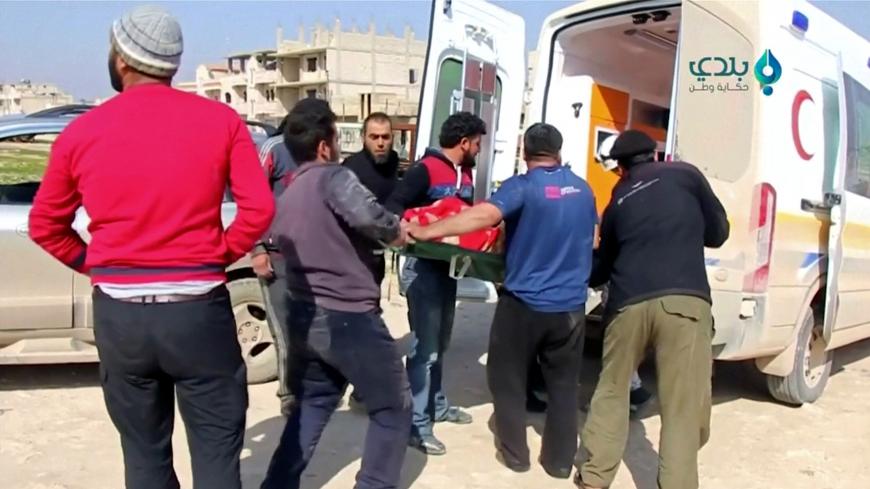 An injured person is carried on stretcher into an ambulance after an airstrike on location targeted by government forces in Khan Sheikhoun, Idlib, Syria, Feb. 26, 2019, seen in a still taken from video.

ALEPPO, Syria — The Syrian regime continues to bomb civilians in the demilitarized zone in northwestern Syria's Idlib province, last week carrying out a horrific massacre in the town of Kafr Nabl.

The regime used cluster munitions in the April 4 attack, according to media activist Sanaa al-Ali from Kafr Nabl.

“The Syrian regime forces [fired] three high-explosive rockets in the market in the center of Kafr Nabl, killing 14 civilians, and wounding dozens. The regime also bombed other towns and cities in the Idlib countryside the same day. Unfortunately, the Turkish military patrols in the buffer zone did little to stop the regime from carrying out strikes,” Ali told Al-Monitor.

“The next day, the imams of the mosques in the town warned people through loudspeakers not to go to mosques to perform Friday prayers, fearing another possible attack by the regime forces,” she added.

Since the beginning of February, the regime's ongoing strikes and shelling of the demilitarized zone’s towns and villages have killed dozens of civilians and displaced thousands of families​.

Turkey patrols inside the 15- to 20-kilometer-wide zone, while Russia operates in the border area outside Idlib. The aim is to prevent the Syrian regime from launching assaults on Idlib, which is home to nearly 3 million people. Turkish army patrols, including armored vehicles flying the Turkish flag, roam the demilitarized zone. Normally, a patrol takes only two hours, which serves as a brief hiatus in the shelling. Once the patrol is over, the bombing resumes.

“The Turkish army ran 16 patrols from March 8 through April 5. But this has not been enough," Naji Abu Hudayfah, a spokesman for Syrian opposition faction National Front for Liberation, told Al-Monitor. "The Turkey-backed front is part of the Free Syrian Army. As soon as the patrols are over, the regime resumes bombing the villages and towns with heavy artillery shells and rockets. It seems that the Syrian regime doesn't wish to abide by the Russian-Turkish agreements and seeks to disrupt them. Russia and Turkey, which are the guarantors of the de-escalation process in the area, ought to further pressure the regime to stop its bombing.”

Yet the regime has intensified its air and artillery campaign in the opposition-held cities and towns in Idlib, rural Aleppo, Hama and Latakia, prompting armed opposition factions to retaliate by attacking regime sites.

“We have every right to retaliate to the sources of fire," Abu Hudayfah added. "We will not remain silent on the daily regime strikes on our areas. A response in kind is our legitimate right. The Turkish patrol comprises six armored vehicles that are escorted by vehicles belonging to the National Front for Liberation. Every patrol takes a different route, trying to explore all the roads of the demilitarized zone. Perhaps in the coming period, there will be more patrols to stop the bombing and prevent it altogether.”

“A few hours later, after the end of the patrol, the regime forces resumed the bombardment of the very same villages that were patrolled earlier in southern Aleppo. The regime also bombed the town of Zammar with artillery shells and rockets,” Jwaid concluded.

Al-Monitor also spoke to Deifallah al-Murr, head of the local council in Idlib province's Umm Jalal. Murr was also appointed by the Turkish army and the local councils in the area as a coordinator between the two sides.

“We have had several meetings with military officials in the Turkish army over the last few days," Murr said. "We have been assured that there will be an uptick in the Turkish patrols during the month of April. We hope this will put an end to the regime’s attacks. Local councils in the demilitarized zone’s villages and towns that have been patrolled have been very cooperative and expressed their readiness to facilitate the operation. The residents, however, will not rest until the shelling stops and they can go back to their daily lives."

A member of the Humanitarian Response Coordinator, a charity in northern Syria, told Al-Monitor, “Despite the ongoing Turkish patrols, we have not registered the return of any of the displaced families in the camps of northern Idlib to their homes. On the contrary, people are still fleeing from this area to the camps, or to areas close to the Turkish checkpoints and observation points, as the regime did not stop shelling.” The member used the pseudonym Abu al-Abd.