Iranian women were allowed into Azadi stadium to watch a soccer game alongside men for the first time since the 1979 revolution. 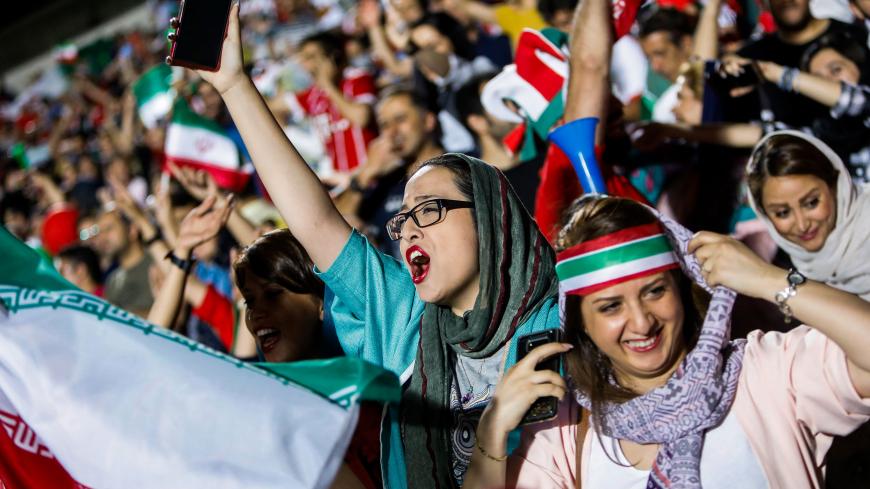 Football fans wave the Iranian national flag and cheer during a screening of the 2018 World Cup match between Iran and Spain at Azadi stadium, Tehran, June 20, 2018. - STRINGER/AFP/Getty Images

After 40 years and some last-minute power plays and wrangling between President Hassan Rouhani's administration and conservatives in the police force, Iranian women were allowed to enter Tehran's Azadi stadium to watch a televised World Cup match, between Iran and Spain, alongside men.

According to Iranian journalists, approximately 10,000 tickets were sold to the screening of Iran’s second match in this year's tournament. The stadium seats more than 100,000. June 20 was to be a historic date, given that it would be the first time under the Islamic Republic that men and women would be allowed to watch the game together.

When ticket holders arrived at the stadium, they were greeted by members of the police force blocking their entry. Some returned home, while others staged a sit-in outside the stadium in front of the police. Many began posting pictures and videos online. At this point, Rouhani became directly involved, issuing a presidential order instructing the Interior Ministry to order the police to allow all ticket holders to enter the stadium.

It is not clear who had commanded the police forces to block entry. Iran’s police commander is selected by the supreme leader, Ayatollah Ali Khamenei. The president, who chooses the interior minister, has a certain amount of discretion as well.

The power dynamics witnessed in this episode revealed that the president, if needed, can exercise authority over matters previously thought untouchable. That Rouhani's initiative was almost blocked in the final minutes, however, illustrates one of the major problems in the Islamic Republic — the continuing existence of multiple power centers, many of them unanswerable to the public.

The reasons cited for opposing women attending events at stadiums have ranged from a lack of security for women at the large stadiums to protecting women from exposure to the obscene comments that men typically make during matches.

There are also religious objections. When former President Mahmoud Ahmadinejad, a conservative, had at one point advocated the idea of permitting women into stadiums, high-ranking clerics previously supportive of him publicly opposed it. Ayatollah Makarem Shirazi warned that stadiums everywhere in the world are “known for insecurity” and are the scene of violence and even murder.

Shirazi reprimanded the president for not speaking to religious elders before promoting such a policy. Meanwhile, Ayatollah Mohammad Taghi Mesbah Yazdi, once considered Ahmadinejad’s spiritual father, said that he had personally conveyed his objection to the president on the matter.

Domestic Iranian media websites, ranging from the conservatives' to Reformists', published pictures of Iranian women alongside men at the stadium cheering for Iran’s national team. The event also became international news, with foreign soccer players speaking out. Sergio Ramos, who plays for Spain and Real Madrid, retweeted a story about female fans watching the match and added, “They are the ones who won tonight. Hopefully the first of many.”

According to Nasser Mahmoudfard, director of the Azadi Sports Complex, female fans will also be allowed into Azadi to watch Iran’s televised match against Portugal on June 25.