International human rights activists and organizations accuse the government of President Abdel Fattah al-Sisi of launching the worst large-scale campaign against the opposition ever witnessed in Egypt. 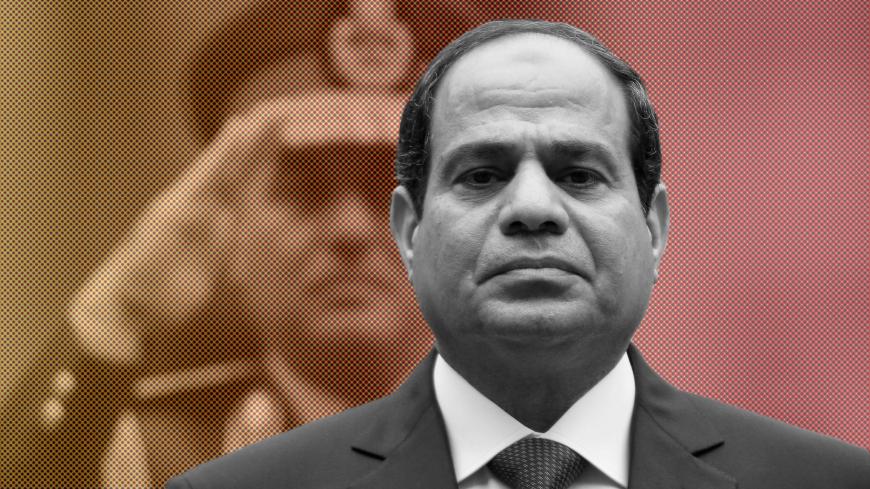 CAIRO — Dozens of politicians, writers and human rights activists were attacked June 5 by unknown assailants at the iftar dinner party for the breaking of the daily fast during Ramadan organized by the Civil Democratic Movement. The assailants crashed the iftar at the Swiss Club in Cairo and overturned the dinner tables while chanting “Traitors! Spies!”

The head of the Constitution Party, Khaled Dawoud, who attended the dinner, said in a Facebook post on the day of the incident, “There are no more red lines and any gathering for the opposition or independents figures is prohibited,” hinting at the regime’s responsibility in planning the attack.

Mustapha El Sayed, a professor of political science at Cairo University who was also present at the event, said the assailants were shouting slogans supporting President Abdel Fattah al-Sisi. In a Facebook post, Sayed said, “The iftar party was initially a social gathering and some of the attendees would have taken advantage to open discussions about national dialogue to achieve political development and democratization in Egypt.”

Parliamentarian ‎Haitham El-Hariri commented on the June 5 incident, saying, “Such attacks send negative messages at the start of the new presidential term and contradicts the president’s promises.” He asked in a Facebook post, “Why is the security policy not in line with the rhetoric of the presidential institution?”

On June 2, Sisi addressed the Egyptian parliament and pledged to achieve real political development. “I assure you that tolerance and common spaces are my top priority for achieving peace and harmony in our society,” Sisi said.

According to a Human Rights Watch report published May 31, the Egyptian security forces raided the houses of six Egyptian activists and arrested them in the month of May.

The executive director of the Middle East and North Africa division of Human Rights Watch, Sarah Leah Whitson, stated in the report, “The state of oppression in Egypt has sunk so low that al-Sisi’s forces are arresting well-recognized activists as they sleep, simply for speaking up.” She added, “The message is clear that criticism and even mild satire apparently earn Egyptians an immediate trip to prison.”

The Supreme State Security Prosecution requested an investigation into these arrested activists within the scope of case No. 621 of 2018, on charges of joining an outlawed group and spreading false news.

On May 18, police arrested labor rights lawyer Haytham Mohamdeen, following a 15-day investigation by the Supreme State Security Prosecution. He was accused of collusion with a terrorist organization and inciting protests.

Prominent Egyptian blogger Wael Abbas was arrested May 24. He was accused of colluding with a terrorist organization, using the internet to promote terrorist ideas and encourage terrorist acts, and spreading false news to intentionally disrupt security and public peace and harm public interest. The security prosecution ordered his arrest pending further investigations.

The Egyptian security campaign was not limited to activists and journalists; it also included a former presidential campaigner who worked on Sisi’s 2014 electoral campaign. The prosecution ordered the provisional arrest of political activist Hazem Abdel Azim on May 28 for 15 days pending further investigation. He was accused of calling for obstructing the constitution and spreading false information.

On May 30, two days prior to Sisi’s taking the constitutional oath of office for his second term, the European Union issued a statement expressing concern over the recent wave of arrests of political and human rights activists in Egypt.

The statement said, “The increasing number of arrests of human rights defenders, political activists and bloggers in the latest weeks in Egypt is therefore a worrying development.”

The Egyptian Foreign Ministry rejected the EU’s statement and responded on the same day, describing the statement as “inaccurate” and “not representative of the Egyptian reality.”

Gamal Eid, director of the Arabic Network for Human Rights Information, said that because the Egyptian regime is scared of criticism, it resorts to spreading fear among the opposition and those seeking democracy through arbitrary arrests.

“The latest campaign against activists aims to drain democracy in Egypt and punish those with different opinions,” Eid, who is also a human rights lawyer, told Al-Monitor. “The majority of accusations are vague, subject to interpretation and lack proof.”

He also warned of the rising political tensions and of more anger triggered by the ongoing arrest campaigns.

Journalist Abdallah al-Sennawy believes the priority for the Egyptians is the economic crisis that the country is going through. Yet he noted that the recent wave of arrests only adds more negativity to the political and economic arenas when the country is desperate for political openness.

Sennawy told Al-Monitor, “Restriction of public freedoms and oppression amid an economic crisis will only lead to unrest, which Egypt cannot handle right now.”

He said the behavior of the Egyptian security forces contradicts the president’s promises in terms of freedom of thought and expression. Sennawy added that the state’s current political approach is unclear and its security decisions are random.

National Council for Human Rights member George Isaac told Al-Monitor that Sisi had granted pardons May 16 for around 332 prisoners charged with criminal offenses, but that only four have been released.

Isaac said he had hoped the prisoners of conscience and those who were not involved in violence would be released. He was surprised by the latest wave of random arrests, and is working on a petition to be sent to Sisi asking for the immediate release of those not convicted of violence.

Isaac believes that “the grip of security forces in Egypt is too tight and the ongoing oppression will lead Egyptian young people to total despair.”

Alaa Abed, head of the Egyptian parliamentary Human Rights Committee, said, “Political activists were arrested because they were involved in matters threatening Egyptian national security,” such as leaking false news abroad, claiming forced disappearance without proof and criticizing the government without proof.

“This has to be stopped to preserve national security,” he told Al-Monitor.

On May 24, the White House issued a statement expressing the US administration’s concern about the Egyptian authorities’ arrests of peaceful activists in Egypt. The Egyptian government has yet to comment on the statement.

Ever since Sisi was elected for a second term, the authorities have arrested dozens of critics. Most of those arrested have been either secular or leftist, and they are being interrogated concerning charges of spreading false news and joining banned groups or terrorist organizations.

Dawoud said on his Facebook page, “We hold on to our right for [a better] Egypt, life, freedom and social justice. We warn about the current political sanctions.”