Khaled Dawoud was arrested as part of a sweeping crackdown on anti-government protesters in 2019. 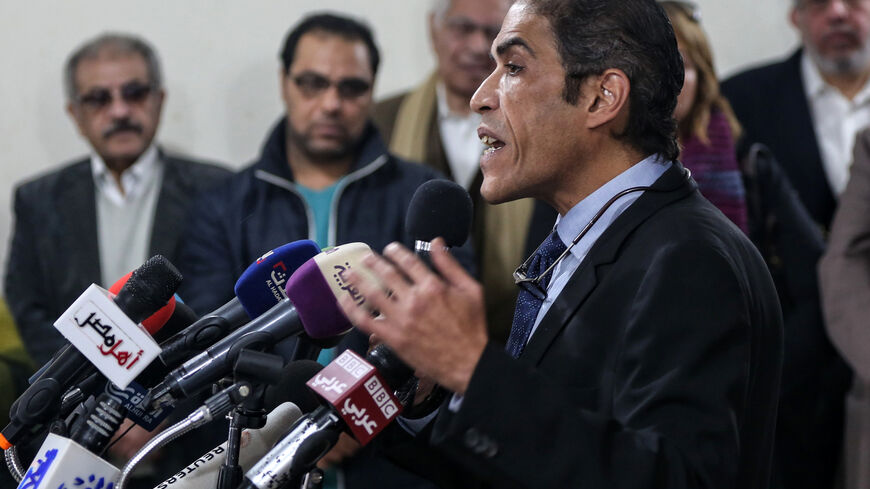 Egyptian journalist Khaled Dawoud speaks during a press conference on the Egyptian opposition ahead of the March 2018 presidential elections, in Cairo on Jan. 30, 2018. Dawoud was detained by the Egyptian regime in September 2019 and was only released on April 12, 2021. - MOHAMED EL-RAAI/AFP via Getty Images

Egyptian authorities on Monday released Khaled Dawoud from prison, after the prominent journalist and government critic spent more than a year and a half in pretrial detention.

Dawoud’s arrest in September 2019 came as Cairo launched a sweeping crackdown on anti-government protesters, during which security forces rounded up more than 2,000 people calling for President Abdel Fattah al-Sisi’s removal.

Dawoud was heading to meet his elderly father in Cairo when he was detained, reportedly without a warrant or reason given. The next day, the Supreme State Security Prosecution accused him of collaborating with a terrorist group, spreading false news and misusing social media — charges the Egyptian government frequently slaps on political opponents and activists.

His former cellmate in Tora Prison has described their 6-square meter (64-square-foot) cell as a “choking space” where Dawoud slept on the floor with only a blanket. Prison guards reportedly barred Dawoud from communicating with his family, including his young son.

"The Egyptian government has deprived Dawoud of nearly two years of his life for no reason other than his opposition to Sisi's crushing of democracy," said Sari Bashi, research director at the Washington-based Democracy for the Arab World Now.

"In Egypt, the authorities don't need evidence or a trial — they punish dissidents by throwing them in jail and keeping them there,” Bashi said in a statement.

Dawoud, a prominent critic of Sisi’s government, was the assistant editor-in-chief of the state-run Al-Ahram Weekly and previously chaired the opposition Constitution Party. He also taught journalism as an adjunct professor at the American University in Cairo.

Since coming to power in a 2013 military coup, Sisi has overseen the arrests of tens of thousands of perceived critics, many of whom are journalists. The North African country is listed 166th out of 188 countries on Reporters Without Borders’ annual press freedom ranking.

The Joe Biden administration has expressed concerns over Sisi’s assault on free speech and has said human rights would be “central” to the US-Egypt relationship. A number of US citizens and permanent residents have been arbitrarily arrested and detained in Egypt in recent years.