How much freedom do Egypt's female preachers really have?

The Egyptian Ministry of Religious Endowments recently decided to permit female preachers to give lessons and meet with women across the country as part of its reforms to renew religious discourse. 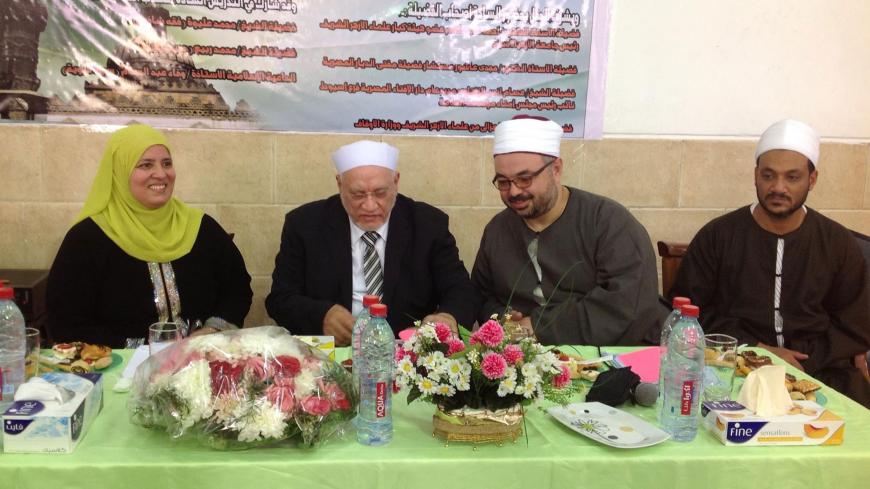 The Egyptian Ministry of Religious Endowments set a new action plan May 13 for the holy month of Ramadan, which included, for the first time, allowing female preachers to provide religious lessons in major mosques. The female preachers will also be allowed to organize tours in some villages and visit a number of government departments to discuss the values of Islam with female employees.

The Ministry of Endowments issued a decree Feb. 13, 2017, appointing 144 women as religious preachers in mosques. Another group of women were later appointed, bringing the total number of female preachers to about 300. The women underwent training for an entire year to be able to start preaching at the beginning of this Ramadan.

The head of the Religious Department and chairman of the Values Committee at the ministry, Sheikh Jaber Taya, told Al-Monitor over the phone how important the role of women is in explaining and interpreting women's religious issues. He said that before the women were appointed as female preachers, they had to pass a series of tests. Their functions include working in different mosques to teach women about religion and holding private seminars, as well as visiting a number of government departments to preach to working women about the values of Islam.

Taya added that the ministry has designed a special plan to activate the functions of these preachers during Ramadan by assigning them to major mosques in Cairo and a number of governorates and allocating specific times for them to give religious lessons.

Taya said the preachers who were appointed in 2017 went through a long preparation period, which included courses in preaching at the Ministry of Endowments before working in mosques for the first time this Ramadan. He said the long training period was necessary to prepare the women preachers to speak before an all-female audience.

Regarding the restrictions on the work of these female preachers, Taya said, “The ministry has set certain points that the preachers should avoid, namely preaching on extremism, collecting donations, giving lessons at home and changing schedules or canceling lessons without the ministry’s knowledge.”

Wafaa Abdel Salam, a preacher who was assigned by the Ministry of Endowments after having passed tests on the Quran, jurisprudence and hadith (sayings of the Prophet Muhammad), told Al-Monitor that she had been working in the field of Islamic Dawah for 15 years now and the Ministry of Endowments has asked them to teach women about fasting and requested that they focus on ethics, faith and humanities.

Abdel Salam, who writes in a number of religious papers, added that female preachers teach women how to improve their values and how to deal with their husbands, neighbors and children to achieve internal peace, which has a positive impact on society as a whole.

On June 2, Youmna Nasser, a preacher at the Ministry of Endowments, told the TV show Street Studio, “The presence of female preachers is important so as not to leave mosques and religious women's lessons for nonspecialists,” explaining that the ministry’s female preachers are available at many locations and on different dates to answer the questions and inquiries of all women.

However, Yasriya Abdul Aziz, 52, who attended one of the religious lessons given by female preachers in a mosque in eastern Cairo, told Al-Monitor that in her view the performance of these preachers was very weak and that they try to avoid answering many questions for political reasons. According to Abdul Aziz, this is due to the restrictions they are forced to abide by.

Abdul Aziz said that when she asked a female preacher a question about freedoms in Islam, the preacher refused to answer, saying her job was to only explain the lessons specified by the Ministry of Endowments.

Abdul Ghani Hindi, a member of the Supreme Council for Islamic Affairs at the Ministry of Endowments, told Al-Monitor over the phone that assigning female preachers is a real attempt by the ministry to block pathways to other religious organizations that use women and religious lessons as a basic entry point for spreading their extremist ideas among Egyptian families.

He said the Ministry of Endowments’ decision to appoint a number of female preachers began last year followed by long training sessions that lasted about a year to prepare them psychologically and linguistically so they are able to address their audience of women and convince them, noting that the training sessions were conducted in cooperation with the National Council for Women.

Hindi said the Ministry of Endowments has set a few conditions for candidates, namely for them to be graduates of Al-Azhar University or Al-Azhar Institutes. The registration is still open and applicants have to submit the required documents and take a number of tests in Sharia and Arabic language.

Mona Ezzat, the director of the work and women's program at the New Woman Foundation, told Al-Monitor that she cannot judge the decision's positive outcome unless these preachers are granted a large scope of power to deal with issues, such as the freedom of discussion and the interpretation of legal issues without restrictions or censorship by the Ministry of Endowments.

Ezzat said that women should have an inherent right — and not just an acquired one — to be religious preachers, saying that “limiting the task of interpreting religion to men is a form of discrimination and exclusion against women, especially since these male preachers are not fully aware of the circumstances of women to answer their questions.”