Iraq's once-impressive Lake Milh used to be a major touristic site near Karbala, but now its vanishing water is part of a growing regional crisis. 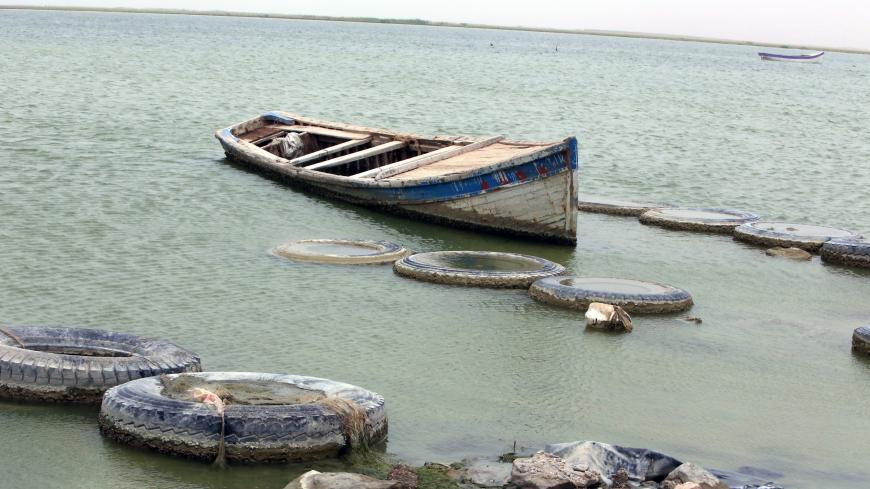 A fishing boat floats at the shore of Lake Milh, west of the Shiite holy city of Karbala, Iraq, May 20, 2013. - AHMAD AL-RUBAYE/AFP/Getty Images

Karbala’s Lake Milh hasn’t seen a lot of visitors in the last few years. Once a popular picnic destination for Karbala residents, the lake’s water has dwindled, leaving most of it a desert with nothing but derelict fishing boats and dead animals.

The second-largest lake in Iraq, Lake Milh is also known as Lake Razzaza; it lies west of Karbala and southwest of Baghdad. It is fed by the Euphrates River as well as rainfall and groundwater sources. Over the last decade, however, it has been drying up.

Saeed Ali, a fish vendor who lives near the lake, told Al-Monitor, “The lake was an important source of fish in the '80s and '90s. But with time, it has become a mere pond that will one day dry out completely if the issue is not addressed.”

Furat al-Tamimi, head of the parliament’s Committee for Agriculture, Water and Marshlands, said the situation requires immediate attention. He told Al-Monitor, “The Ministry of Water Resources and the committee are informed of the situation at Lake Milh. We are tracking the declining water levels at the lake with great concern. This is also happening in many other lakes and rivers.”

Tamimi said the lake's falling levels are related to the drought that has plagued Iraq since 2017; some estimate the drought will continue until 2026. But there are no plans to restore the lake, said Tamimi, a deputy from Ammar Hakim’s Hikmat movement. He said a number of civil society activists and specialists on natural resources in Karbala province have criticized the “government’s idleness over the water crisis in Lake Milh,” with some activists working together on a media campaign to draw the world’s attention to the lake.

Engineer Aoun Thyab, the most senior member of the advisory board of the Ministry of Water Resources, said the problem is much more complicated. “Addressing this problem is not so simple,” Thyab told Al-Monitor. “Protests and calls on environmental groups won’t solve it because the problem is related to internal and regional policies involving the water sector, as well as the rain and streams that flow from the desert.”

Thyab said the Ministry of Water Resources dropped Lake Milh entirely from its water supply calculations in a 2015 strategic study. “As such, Lake Milh is no longer seen as useful for irrigation, water storage or fish farming.”

He said Lake Milh’s levels decreased from 34 meters (112 feet) above sea level to 20 meters (66 feet) with the drought. “This was due to a number of overwhelming factors, especially the decrease in the Euphrates River, which is the lake’s inflow, because of the Turkish dams that reduced Iraq’s water share. Add to this the scarcer rainfall in recent years and the depletion of streams that flow from the desert around the lake.”

He said, “Lake Milh has also seen higher evaporation levels, which increased salinity, making it effectively impossible for fish to inhabit the lake.” Thyab said that in the 1990s the Iraqi Ministry of Agriculture experimented with a project to farm sea fish but that project proved to be a failure. “It is safe to say that the lake is dead.”

Thyab's remarks indicate that it would be next to impossible to restore Lake Milh as a tourist attraction whose beautiful flora and fauna once brought foreign and Iraqi tourists from every province.

Karbala has also suffered greatly from the armed conflicts in the last decade, most recently when armed groups who fought against the Iraqi state used it as a base. The city of Karbala's practice of draining polluted water into the lake has also contributed to the problem.

But there is hope for the lake yet. In January, the Iraqi National Investment Commission unveiled a $25 million investment project to rehabilitate and develop both Lake Milh and al-Habbaniya, a lake linked to Milh by the narrow Sin-Al-Thibban Canal.

The project includes building a tourist attraction over approximately 4,000 acres and overhauling the existing hotels and 200 apartments to modern standards, as well as a full amusement park, a marina, world-class restaurants and a media center.

The locals worry that the efforts come too late to save the lake. Local engineer Fayez Eisa, who oversees the area's anti-desertification project, told Al-Monitor, “Tired of dealing with the bureaucratic red tape on contracts and permits, the Karbala Holy Shrine administration has established a green belt around 2000 dunams (494 acres) of desert land, where they dug dozens of wells to provide water to the farming areas around Lake Milh.”

Lakes such as Milh represent essential natural reservoirs in efforts to fight the drought that haunts Iraq's agriculture sector. Cooperation with neighboring countries to restore and protect them will be crucial to the region's survival.