The Sawa Lake in Iraq has been associated with tales of history and human activity for hundreds of years, but today it has turned into just another plot of the desert that used to surround it after it has completely dried up. 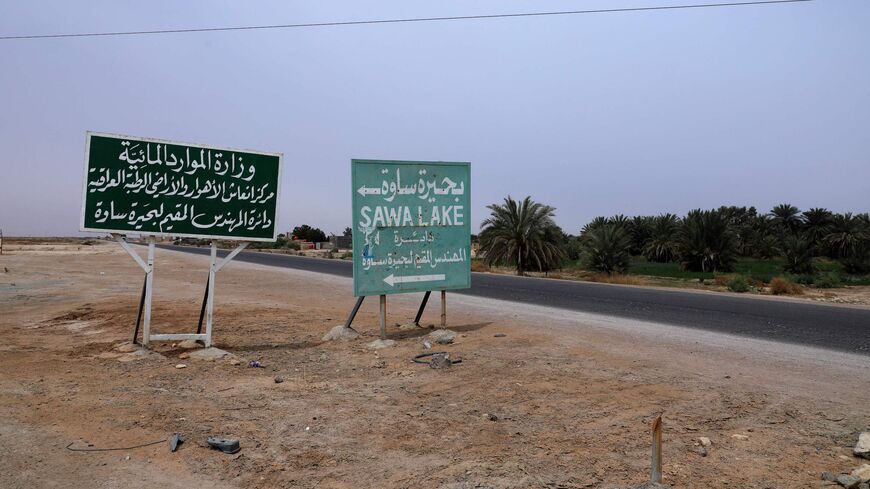 A street sign for Sawa Lake is seen in Iraq's southern province of al-Muthanna, on April 19, 2022. - ASAAD NIAZI/AFP via Getty Images

Lake Sawa, located in Muthanna governorate in southern Iraq, has completely dried up, and so this unique water spot that was located in the middle of the arid desert for thousands of years has disappeared.

The name of this lake was mentioned in history books and religious novels, some of which mention that its waters raged on the day of the birth of the Prophet Muhammad.

Iraqis call the salty lake the Pearl of the South, and its water contains minerals used for medicinal purposes.

For some Shiites, its drying up presents itself as a sign of the appearance of Imam al-Mahdi, a descendant of the Prophet Muhammad, who is to appear after an absence of hundreds of years to rule the world with justice. This has led people to believe the dryness of the lake is a matter of belief.

Hamid al-Nayef, official spokesman for the Ministry of Agriculture, told Al-Monitor, “The land investors near the lake have illegally and randomly dug more than 1,000 wells, which caused a shortage in the lake’s water.”

He believes that the solution lies in “stopping the investors’ abuses on the waters of the lake, and this is not the responsibility of the Ministry of Agriculture but that of both the Ministry of Water Resources and the local government in Dhi Qar.”

Aoun Diab, consultant at the Iraqi Ministry of Water Resources, told Al-Monitor, “Indications of a decrease in the lake water started gradually years ago as a result of agricultural investments in the Samawa desert, where the lake is located, which led to the depletion of the Dammam water-bearing layer, according to hydrological experts.”

He said, “Closed dam areas have come to form on the banks of the lake as well as around the springs from which water flows into the lake as a result of the deposition of salts caused by high evaporation.”

Diab noted, “The lake is deemed as a rare natural phenomenon, being in the middle of a dry and arid desert, and the salts have been greatly concentrated in it for many years, which made it unfit for aquatic life, except for rare and strange-shaped fish.”

He added, “It would have been possible to completely protect the lake from drying up had some efforts been deployed as soon as its water started drying. This would have been possible if the agricultural and irrigation projects in the area that caused the decline in the water level of the lake had been immediately stopped, but the matter is not easy because this intersects with investment interests in the region.”

Aoun revealed “a plan that was developed in a bid to include the lake in the wetlands included in the International Ramsar Convention, concerned with the sustainable use of wetlands, the prevention of their drying up and the development of their economic, cultural and scientific role as well as their recreational value. But the plan is no longer viable as the lake has completely dried up.”

Aoun added, “The drying of the lake is also a natural result of the drought that has affected the Western desert and the Samawah desert, which have not seen rain for years. The wells in the Ayn al-Tamr area in Karbala have also dried up, as a result of the unjust exploitation of groundwater for the cultivation of wheat.”

Abbas al-Amiri, director of the Environmental Analysis Unit in Al-Muthanna Environment Department, told Al-Monitor, “The deepest point in the Sawa Lake is about 7 meters [23 feet], and it is about 5 meters [16 feet] above the level of the surrounding land and the Euphrates.”

The amazing thing about Lake Sawa, according to Amiri, is that it “does not connect to any surface water source, and it is completely closed. The only source feeding it is groundwater from deep caves with unknown depths.”

Amiri noted, “Until the 1990s the water level of the lake was normal and the lake turned into a tourist facility for the people of the governorate.”

In regard to the dryness of the lake, he said that one reason is "the high percentage of salt around the mouths of the springs that nourish it, which caused the lack of water flowing out of these into the lake space. Also, the geological movements in the ground have created cracks and internal fissures, which led the groundwater to deviate from the lake.”

Director of Al-Muthanna Environment Department Youssef Sawadi told Al-Monitor, “Iraq is losing a cultural landmark and a rare environmental and biodiverse area that is rich in fish, marine animals and migratory birds.”

He also attributed the lake’s dryness to human causes and said that it is “due to the daily activities near the lake as well as the agricultural and industrial investments surrounding it, namely the salt and cement factories.”

Sawadi noted, “There are also natural causes behind this phenomenon, as climate change has affected the nature of the lake, especially considering that Iraq is among the five countries most prone to climate change. Temperatures have risen significantly in Dhi Qar, while this year the rains did not fall at all in the province.”

He added, “The scarcity of the Euphrates water, which feeds the groundwater near the lake, has brought its water levels to zero, and there is now only one spring the size of 20 square meters [215 square feet].”

He called on the “Ministry of Higher Education, as the head of the higher committee supervising the lake, to work on finding urgent solutions to replenish the lake and revive its ecological diversity.”

Lake Sawa has clearly fallen prey to the decline in water reserves in Iraq by half compared to 2021 due to the lack of rainfall and the decrease in the river water flow from neighboring countries. This calls for a strategic plan to save water bodies from extinction and agricultural lands from turning into desert.