After calls to change the Quran, Turkey moves to ban all things French

President Recep Tayyip Erdogan’s anger over a French manifesto on changing the Quran failed to generate outrage among the Turkish public, but did result in decisions on education policy harmful to Turkish students. 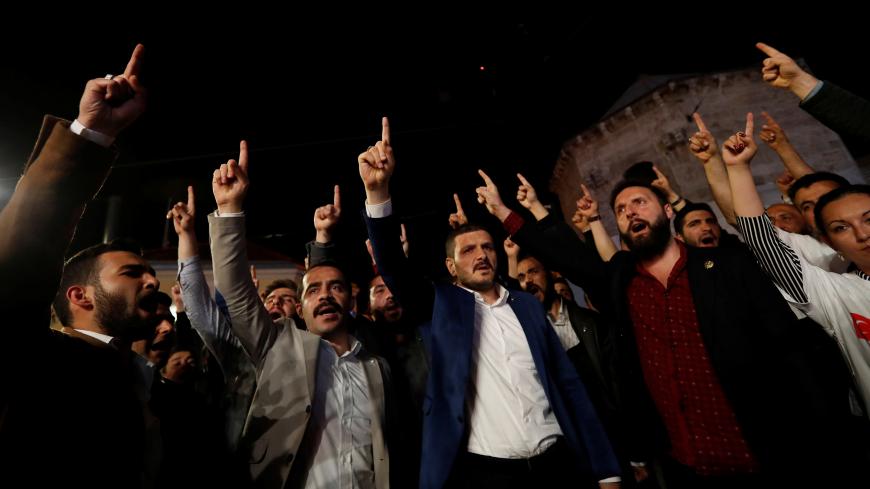 Pro-Islamist demonstrators shout slogans during a protest against France near the French Consulate, Istanbul, Turkey, May 9, 2018. - REUTERS/Murad Sezer

It all started April 21, with news of the Manifesto against the New Anti-Semitism. The declaration, written by Philippe Val, former director of the satirical magazine Charlie Hebdo, was signed by more than 250 intellectuals, artists and politicians, including former French President Nicolas Sarkozy. The manifesto — which calls on theologians to delete Quranic verses that suggest the killing and punishment of Christians, Jews and non-believers — generated strong reactions among Muslims. Although the text does not explain how, the idea was that the abrogation of these parts of the Quran would lead to “French-style Islam.” Muslims in France and around the world reacted to the request by attempting to explain the verses within their historical contexts and dismissed the idea of removing sections as unacceptable.

Turkish reaction to the declaration came May 6, when Omer Celik, minister of EU affairs and chief negotiator for Turkish accession to the EU, posted a series of tweets in Turkish and in English criticizing the manifesto. He claimed the signatories of the document have an ideological affinity with the Islamic State. Turkish presidency spokesman Ibrahim Kalin posted two tweets, the first explaining the declaration and the second stating his view that the Quran cannot be altered and that if the West wants to solve the problem of anti-Semitism, the West should look at itself because the problem originated in Europe.

One of the strongest reactions came from Turkish President Recep Tayyip Erdogan. At the May 8 parliamentary meeting of his Justice and Development Party (AKP), Erdogan delivered an angry speech not only against the declaration and its signatories, but also aimed at France and the West generally, calling them “despicable.” To his nonstop cheering fans, the president said:

An impertinent group appeared in France the other day and issued a declaration asking for some verses to be removed from the Quran. It is so obvious that those who say that have no idea what the Quran is, but have they ever read their own book, the Bible? Or the Torah? Or Psalms? If they had read it, they would probably want the Bible to be banned as well. But they never have such a problem. The more we warn Western countries about hostility to Islam, hostility to Turks, xenophobia and racism, the more we get a bad reputation. Hey the West! Look! … The more you attack our holy book, we will not attack yours. But we will knock you down. Who are you to attack our holy scriptures? We know how despicable you are.

Pro-AKP media and commentators promptly joined in, lashing out at France and positioning Erdogan as the protector of Islam. Also, on May 10, the Turkish Council of Higher Education (YOK) announced that 16 new university faculties of French language and literature will not be accepting students. The 19 existing departments will continue with enrollments. News outlets reported that the council justified its decision not simply in response to the manifesto, but also on the basis of reciprocity — that is, the claim that there are no Turkish language and literature studies in France — plus the assertion that the market does not need more graduates from French language departments. The council also announced a ban on establishing additional France language and literature departments.

Frustrated AKP opponents reacted strongly to the council’s action. For example, Sinan Ogan, a former lawmaker from the Nationalist Action Party, tweeted that if Erdogan were actually serious about retaliating against the manifesto as well as French support of the Syrian Kurdish Democratic Union Party, he should cancel the agreement he signed with France to buy 25 Airbus planes. Indeed, Erdogan had lashed out at the French government for its support of the Syrian Kurds in March, but then shifted his focus to defending Islam. A sociology professor at a government university told Al-Monitor on condition of anonymity, “Erdogan needs some of the Kurdish vote, so we are witnessing him slowly easing out of ultra-nationalistic rhetoric and into a more Islamist one, struggling to embrace the Kurds.”

Opposition members also pointed to the inaccuracy of the allegation that there are no Turkish language departments in France. In fact, such departments were founded as early as 1795.

A French diplomatic source told Al-Monitor by email, “In Turkey, Francophonie is historically present in education, with a network of around 15 bilingual schools, among them the prestigious Galatasaray High School, whose 150th anniversary is being celebrated this year. Galatasaray University is a Francophone Turkish university and the Institut Français de Turquie, the language and cultural center under the umbrella of the embassy, is active in Ankara, Istanbul and Izmir. Turkish language and Turkish studies are also developed in France. Departments exist in such important higher education institutions as the National Institute for Languages and Oriental Civilizations in Paris, University of Lyon, University of Aix-Marseille and University of Strasbourg. The Turkish language is also taught to 17,000 pupils in the French education system through the ELCO program.” ELCO — Enseignements langues et cultures d'origine, or Teaching of Language and Culture of Origin — was founded in the 1970s to educate immigrants in their native tongues alongside their French educations.

On May 14, the Islamist daily Yeni Akit took things a step further, calling for a “ban on French literature, music and cinema” under the headline “YOK’s Slap to France.” Ibrahim Kiras, senior editor of Karar, a newspaper founded by formerly pro-AKP journalists, shared a photo of the headline and asked whether the government employees who made false statements would be held to account given that the allegations about the Turkish language not being taught in France were false.

Despite the efforts by the government and its media supporters, the public did not buy into the outrage over the manifesto. Conversations with Islamists and conservatives pointed to three reasons. First, Turkish citizens have become desensitized to Erdogan’s outbursts. One senior bureaucrat told Al-Monitor, “The manifesto is Islamophobic, but we [the AKP] have failed to punish our own for ridiculing verses from the Quran. How can we throw stones at non-Muslims?”

Second, the public feels that angry and hateful rhetoric against the West does not benefit them. A member of a prominent Muslim nongovernmental organization took Erdogan to task, telling Al-Monitor, “Scolding the West and calling them names have lost their impact when you [still] go visit these countries and keep playing by their systems. There is no proper policy behind Erdogan’s anger. We have not forgot how he distanced himself from the Mavi Marmara [Gaza] flotilla victims by saying, ‘Whom did they ask before they departed?’” The suggestion that what happened to those on the flotilla was their fault galled Turks.

Third, the government’s refusal to accept new students into French language departments coupled with the false assertion of reciprocity were viewed as counterproductive. Almost 2.5 million students are preparing for the University Entrance Exam in Turkey this year. Fewer than 500,000 will be accepted into four-year colleges. Hence, announcing the closure of departments is not the kind of news that will lead to citizens rejoicing. A number of social media postings said the AKP’s response serves only to punish its own people, validating the Turkish saying that “rancid vinegar damages its own barrel.”