The Turkish government's tightening regulations on the academic code of conduct could be another blow to freedom of expression. 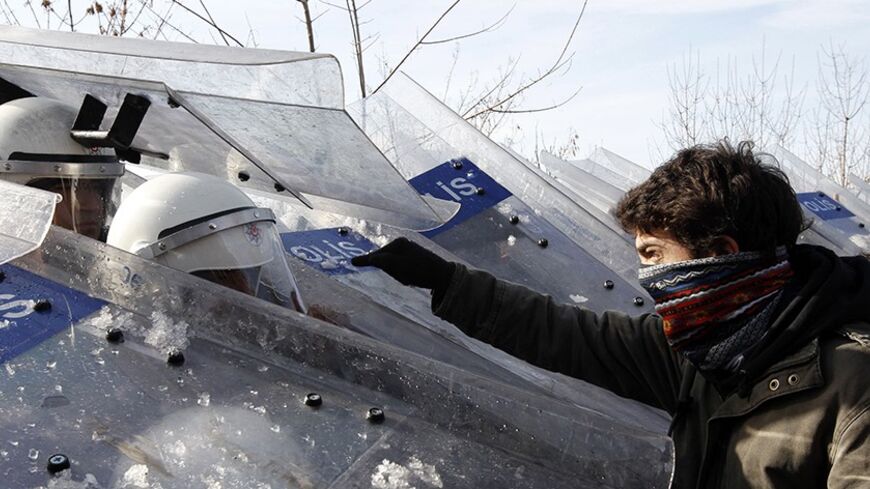 My first childhood memories include a pair of dark green boots and men in uniform. They were soldiers who had come to pick up our neighbor, a general. I was a child of Turkey's post-1980s coup. I grew up with a fear of any political opinion. “Anarchist” was the monster under our beds those years. My generation was mostly “apolitical.”

These thoughts crossed my mind as I watched the youth protest Turkish Prime Minister Recep Tayyip Erdogan during his visit to my alma mater, the Middle East Technical University, back in December 2012. At the time, about 3,600 police protected Erdogan against 300 student protesters. This was six months before the Gezi protests. Erdogan condemned not just the students for “terrorizing” the campus, but also the academics for supporting their right to protest. He suggested these academics should quit academia and join the protesters, since an academic’s job is to “teach students valuable information, like how to use a computer. I condemn all academics who support these protests. We do not need teachers like this.”

During Gezi, Erdogan and Justice and Development Party (AKP) members’ frustration regarding the scope of academic freedom was rekindled. For instance, Bekir Gur, a professor at Yildirim Beyazit University, penned a Dec. 29, 2012, column titled “Is a university a camp or a campus?” Gur wrote, “The young students may not be fully aware of how misguided their protests may be. What is really odd is that some academics also tolerate and even encourage their protests.” Gur concluded, “The special status bestowed upon universities by society is not a right but a privilege, and no one has the right to squander this privilege.”

As I diligently followed the 2012 protest and the governments' reactions, I challenged a colleague to a bet. I suggested that by December 2013 there would be “new and updated” campus regulations affecting both students and academics. The last day of December, my friend reminded me that I owed him a bottle of raki as the Higher Education Board (YOK) only changed the regulations for university students, not academics. It was a close call, since on Jan. 29 the Official Gazette announced that the YOK had updated the 1982 regulations for all university personnel.

The YOK was established after the 1980 military coup with the sole purpose of “supervising universities,” including everything from student associations to class curriculum. Most Turkish universities are public, which in turn makes many academics “state employees.” Is there a safe island for those academics in private universities? Baris Balcioglu, a Canadian-Turkish professor of industrial engineering from Sabanci University, told Al-Monitor, “It is my understanding that we are not a private, but a waqf [private foundation] university. We provide a public service. So, are were considered public employees? It is really confusing.” Indeed, it is, and the YOK regulates all university personnel.

The Jan. 29 changes to the YOK code received mixed reactions from pundits.

Pro-AKP pundits claim the update reduces “punishments” from the coup era. For example, the penalty related to “making public declarations without prior approval” was lessened to a “denunciation” and warning. The new bylaw applies to all “except for scientific discussions and declarations, without official permission, to provide information or statement to the media.” To put it in real terms, right now I could be incriminated by the YOK — if I were an academic working in Turkey — because I am discussing an official issue (the YOK’s updated law). Another aspect of the potential charge could be that, as a political scientist, I am overstepping the bounds of my academic field by discussing law. As you can see, the law is vague.

When the law generated public reaction, the YOK officially explained that the law is only meant to stop people from talking “out of capacity” — that is, if I claimed to write on behalf of the YOK. Pro-AKP pundits claim that the reduced penalties for speaking to the press without clearance are a sign of strengthened freedoms. However, lawyers working with teachers syndicates informed Al-Monitor that a reduced penalty suggests frequency. That is, if your “superior” in the department or college agrees you are out of bounds, rather than initiating a tedious process of ending tenure, they could issue “warnings” much more quickly and easily. A few of those warnings in your file could promptly destroy your career.

The AKP has rightfully complained about the “restrictions” of coup-era regulations, and with the updated YOK bylaws, they have freed academics from the responsibility of “respecting the values of the Republic.” Unfortunately, the liberation of these archaic coup-era regulations stops here. Rather, it seems the AKP aims to pre-empt another Gezi-like youth protest from erupting at universities, as the law forbids any kind of “boycott, distribution of pamphlets, displaying unapproved posters.” If you join in any “ideological or political” movements, your employment may be terminated. For instance, if you decide to march with your students to criticize an official decision, it is safe to bet that your career will be at risk. The law is read by many as a way to silence academics.

Professor Soli Ozel from Kadir Has University told Al-Monitor, “Some academics allowed students to take makeup exams during Gezi protests. This was seen as a supportive move by academia to the protests. The updated bylaw can be seen as a preventive measure.” A young professor who was on sabbatical during the Gezi protest told Al-Monitor he received a complaint from his students that he “hurt their feelings with his pro-Gezi tweets.” The professor had written, “Do not be afraid to express yourself in peaceful ways, freedom of speech is a human right.”

Professor Birol Baskan, from Georgetown University's Qatar campus, told Al-Monitor, “The tenured academics used to be the most immune group in Turkey to any government pressure, as the government can do little to get them fired from their positions. This change in the bylaw precisely targets this group and aims to render them unprotected against the government. In this regard, it is a serious setback.”

Another section of the YOK bylaw calls for termination of employment if an academic, while abroad, tarnishes the Turkish state’s reputation or acts against the ethics of his position. As someone who has been organizing and attending Track II conferences for more than a decade on Middle Eastern politics, I can confidently tell you Turkish academics are almost mute in our field. The only ones who dare speak are the Islamists, which I admired for quite a few years. It was only a couple of years ago that I came to understand that many of the “other” Turkish academics remained quiet when asked their opinions because they feared retribution — retribution that has now become official.

I sought the opinions of several colleagues from different universities in Turkey about this change, but decided not to quote them. One told me, “It is good that you wrote to me prior to the new Internet surveillance law [coming into effect], since after that all citizens’ private dealings online risk becoming ‘public’ anytime.”

Turkey's era of military coups has hopefully come to an end, but I fear there are still monsters under our beds. Hopefully, an official will write a rebuttal to this piece, and we will all rest easy.