A French group's call for removing some Quranic verses prompted responses ranging from "Ignore it and it'll go away" to "Go to hell." 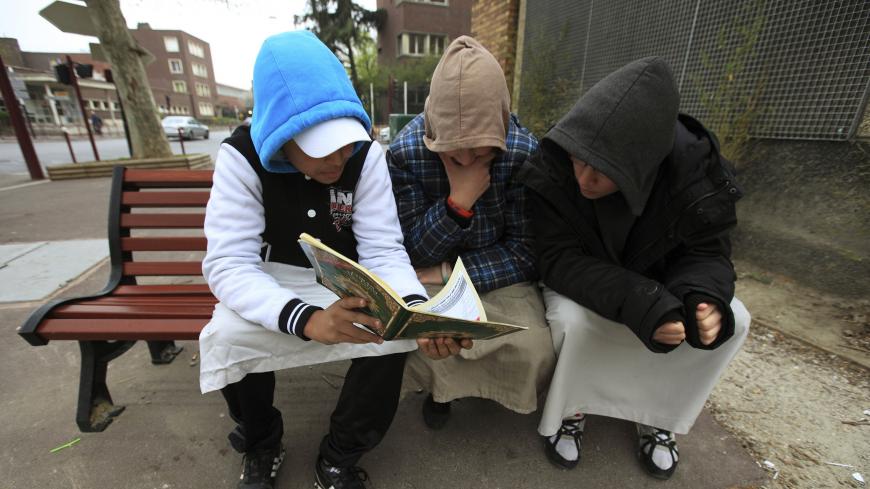 CAIRO — Reaction has been varied to a letter published recently in a French newspaper calling for certain passages of the Quran to be removed. The manifesto claims that certain Quranic passages are anti-Semitic and call for the killing of Jews, Christians and atheists. The verses should be removed, it said, "so that no believer can rely on a sacred text to commit a crime." France "has become the theater of deadly anti-Semitism," the letter continued, and anti-Zionist movements have supplied an "alibi to transform the executioners of the Jews as victims of society."

Reaction in France to the letter was swift and turbulent: It was praised by some as breaking a perceived silence about violence against Jews in France, and condemned by others for blaming Islam for anti-Semitism.

In the Middle East, Turkish President Recep Tayyip Erdogan is being lauded by some for his May 8 retaliation that he directed toward the letter's signatories: “We will not stoop to your level and attack your holy values while you are attacking ours, but we will undermine you. Who are you to attack our scriptures?”

Several Egyptian and Arab activists spoke of Erdogan's speech on social media, applauding what they said was his brave response and denouncing the absence of official responses from other Middle Eastern presidents, princes, kings and governments.

Religious figures and scholars, however, did comment. Abbas Shoman, the deputy sheikh at Al-Azhar University in Cairo, spoke April 26 on the sidelines of Al-Azhar Festival for Creativity and Arts. He said, “The demands to remove verses from the Quran are pointless. This only proves the [French] ignorance at best. Islam is not responsible for others not understanding the meaning of certain verses and only looking at them from a superficial point of view without referring to scholars. The verses they believe are calling on them to kill are in fact verses of peace.”

He added, “I call upon those behind such demands to understand the Book of Allah correctly, but if they rely on their misguided understanding, then to hell with them and their demands.”

The Egyptian parliamentary Committee on Religious Affairs commented on the manifesto in an April 25 statement issued by committee Chairman Osama El-Abd: “The calls to remove verses from the Quran fall on deaf ears and should not be heeded. The committee will, however, take appropriate action against that manifesto and we will have a say in response to this offense against the book of God Almighty.”

The committee has yet to take any action in this regard, as the manifesto hasn't yet been submitted to any official religious institution such as Al-Azhar.

Amid all these reactions to the manifesto, some wonder why Egyptian President Abdel Fattah al-Sisi and the Ministry of Foreign Affairs have yet to issue an official response.

Ayman Abdel Wahab, a political researcher at Al-Ahram Center for Political and Strategic Studies, told Al-Monitor, “The official authorities in Egypt are not fond of … gaining popularity by appearing as a state that protects Islam from its enemies, as the Turkish president does. Perhaps the state figured the response by Al-Azhar and the parliamentary committee was enough, especially since the demands to remove certain verses from the Quran are ridiculous and everyone ought to ignore them until they fade out.”

However, the Egyptian Foreign Ministry had objected to caricatures of the Prophet Muhammad published in Danish newspapers in 2005 and summoned the Danish ambassador in 2008 to inform him of a formal protest against the republication of such pictures. The protest recurred in 2010.

Mustapha Kamel al-Sayyid, a political science professor at Cairo University, told Al-Monitor, “The state — represented by the Ministry of Foreign Affairs — must take a position regarding the French manifesto because it will negatively affect the international public opinion toward Islamic or Muslim-majority countries, such as Egypt. The manifesto will reinforce the belief that Islamic countries are troubled by violence and produce terrorism, which negatively affects Muslim citizens in Europe — Egyptians included.”

Sayyid added, “It can also prevent Muslim-majority countries from attracting investment and reaching military cooperation with Europe, especially as many countries are currently using this image to declare official positions, such as [US President Donald] Trump’s decision to ban citizens from certain countries he believes to produce terrorism, from entering the United States.”

Baha al-Din al-Ghamri, a political science professor at Egypt's Port Said University, told Al-Monitor that neither the president nor the Ministry of Foreign Affairs responded to the manifesto for three reasons. “First, the manifesto was issued by a group of figures and not by an official body. The state doesn't officially respond to what French citizens write up, otherwise it would inflate the issue. Second, the [Egyptian government] will not be able to pressure the French government to take action, because the manifesto does not conflict with French laws.”

Third, the president and his Cabinet aren't involved with religious affairs, he said, noting that Al-Azhar is the institution that responds to such matters.

“The presidency and government [Cabinet] represent the people in administrative, political, diplomatic and military affairs. Those responsible for representing the state on the popular level are the members of parliament, who are in direct contact with the citizens. This is why it was only normal for the parliament’s Committee on Religious Affairs to declare a position regarding the French manifesto, reflecting the position of the Egyptian citizens,” he added.

Speaking in regard to the Egyptian Foreign Ministry's response to the Danish cartoons in 2005 and 2010, and Erdogan's position on the recent manifesto, Ghamri said, “I believe that these positions are only made for the media and their aim is only to keep one’s popularity. The proof is that the Danish government [back then] did not respond to the Egyptian Foreign Ministry’s protests and take a stand against those who drew the cartoons. Meanwhile the Turkish government did not submit a formal objection against the manifesto to the French Foreign Ministry.”