Economists and investors are not buying the controversial economic theory invoked by Turkey’s president to justify low interest rates in the face of high inflation and the lira's collapse. 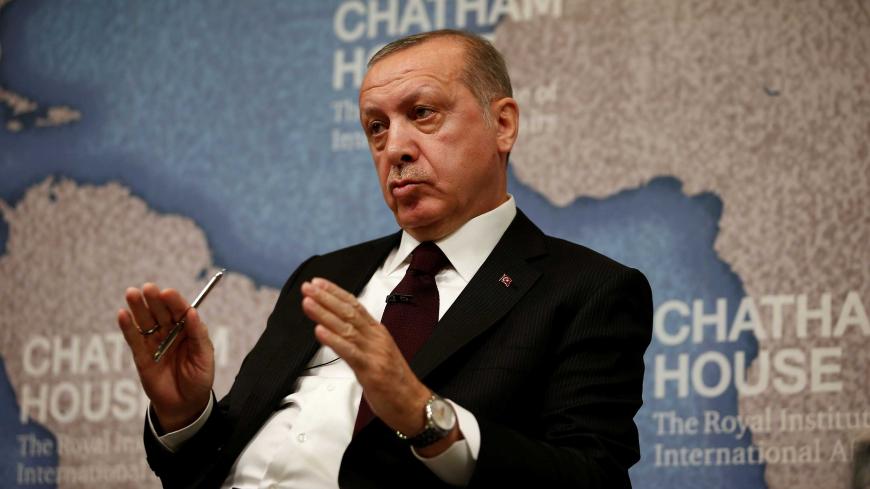 Although international observers have come to decry Turkey’s slide into authoritarianism under President Recep Tayyip Erdogan, they have also tended to treat his rule as a boon to the economy based on the assumption that he is ultimately a pragmatist who guarantees more stability than the alternatives. For example, when the June 2015 election delivered a hung parliament and raised the specter of political deadlock, markets went into a tailspin and remained volatile until November, when snap elections returned a majority for Erdogan's Justice and Development Party.

In a similar vein, when Erdogan announced early elections this April, following months of worrisome economic news, the lira and the Borsa Istanbul rallied on the hopes that his anticipated victory would relieve pressure to pursue growth at all costs and foreshorten the period of dubious policies and pricey populist handouts that typically precede Turkish elections. More than anything, however, investors hoped that Erdogan would stop hounding the central bank to hold down interest rates, which he has repeatedly denounced as the “mother of all evil.”

No one expected Erdogan to suddenly convert to Friedmanian monetarism, but many hoped the prospect of victory would produce concessionary rate hikes to combat inflation, shore up the lira and slow down an economy that has been dangerously overheated by the policy of wanton stimulus he has pushed since the 2016 failed coup attempt. After Erdogan’s May 13-15 official visit to the United Kingdom, such hopes evaporated, as did the sentiment that he is ultimately a pragmatist. Until then, his theory that high interest rates increase inflation — rather than reduce it, as economic orthodoxy would have it — could be dismissed as political posturing aimed at a domestic audience of pious Muslims receptive to the notion (even if they do not entirely subscribe to it) that usury is a sin and should be resisted.

Although Erdogan avoided combative and derogatory rhetoric in London, he did not substantively alter his position on the matter. In a televised interview with Bloomberg and at a private meeting with institutional investors, he reaffirmed his position on interest rates and avowed to oppose them. Moreover, he declared that after the election, he intends to take de facto control over monetary policy, the central bank’s nominal independence notwithstanding. Within hours, the lira hit a record low, and benchmark 10-year bond yields hit a record high. Both trends have since only worsened.

Many investors were left wondering why Erdogan had bothered to try to make his case to an audience that was not only predisposed to abhor it, but indeed bound to punish Turkish markets after hearing it. Curiously enough, there is reason to believe that his presentation was deliberately geared, albeit ineptly, toward suiting their way of thinking by framing things in terms of economic theory.

The purported rationale for Erdogan's comments was laid out in some detail a few days later by Cemil Ertem, one of his economic advisers, in a column published May 17 in the Daily Sabah. Erdogan’s comments had not been properly appreciated, Ertem argued. Whereas orthodox economic thinking is a “rotten and unscientific fallacy” that the global financial crisis of 2008 disproved, Erdogan’s is cutting-edge, in line with “contemporary scientific economic theory.”

Ertem referred to a school of thought that Bloomberg columnist Noah Smith has dubbed neo-Fisherism. This macroeconomic heresy arose not in Turkey but in the United States, when, in 2010, Narayana Kocherlakota, president of the Federal Reserve Bank of Minneapolis, attempted to explain — by drawing on the work of Irving Fisher, an early 20th-century American economist — why inflation did not rise as expected after reserve banks in developed countries slashed interest rates and pursued a policy of quantitative easing. It suggests that in such circumstances, central banks can increase inflation by increasing their nominal interest rate targets, not by cutting rates, as orthodox monetarism would have it.

Although neo-Fisherism has not been accepted by the mainstream, it has several notable partisans and has sparked a lively debate among economists. It is not to be dismissed out of hand, per se, but that is not to say that it pertains to Turkey.

“A model applicable in one situation is not necessarily useful in another,” Bulent Gultekin, associate professor of finance at the Wharton Business School and former governor of Turkey’s central bank, told Al-Monitor. For Gultekin, Ertem’s invocation of neo-Fisherism is a “smokescreen that has no economic validity.” Its model was constructed to explain the persistence of low inflation in developed economies fighting recession, but, Gultekin noted, “The situation in Turkey is entirely different.” To wit, Turkey's economy is developing, overheated, and suffering from high inflation.

There are also differences of scale and relative position in the world economy. Gultekin said, “When a country’s currency is an international reserve currency, such as a US dollar, euro or even Japanese yen, economic policymakers have more freedom.” Turkey is more constrained because it suffers from chronically low savings and is therefore reliant on foreign capital and prone to cyclical current-account crises when exports fail to keep pace with overall growth. Trying to implement the neo-Fisherite model in that context would be a major error, he said. “For small economies like Turkey, such policies are like throwing petrol on a fire,” Gultekin said.

Timothy Ash, senior emerging markets strategist at BlueBay Asset Management, agreed. “The use of Fisherite explanations is a relatively new addition to Erdogan’s long-held battle with the interest-rate lobby,” he told Al-Monitor. “[They are] trying to fit a theory which only really applies to low-inflation, developed markets to high-inflation Turkey.”

Ash has no doubt that it will fail if implemented. “This is plain and simple dangerous,” he said. “The only question is how bad it gets, and whether Turkey suffers an abrupt halt.” If, however, Erdogan comes to his senses and adopts a “half-decent” monetary policy, Ash asserted, “The mood would change pretty quickly.”

On May 23, it seemed as if Erdogan had done just that. After the lira plummeted to an all-time low of 4.93 to the dollar, the central bank held an emergency meeting to raise interest rates, from 13.5% to 16.5%. On the verge of a full-scale currency crisis, proponents of economic orthodoxy, among them central bank Governor Murat Cetinkaya and Deputy Prime Minister Mehmet Simsek, finally prevailed over Erdogan’s more eccentric advisers and won his approval for a hike. The lira immediately strengthened to 4.58.

In a speech that evening, Erdogan said that Turkey does and will comply with global principles in monetary policy. He also warned, however, that he would not let “global governance types” ruin the country and reiterated that Turkey will “take measures to lower inflation and the current account deficit in a very different way after the elections.” The lira sank back to 4.75 by mid-afternoon the next day.

If Erdogan wins in June and follows through on his promise to take full control of monetary policy, Turkey may be in trouble. In that case, tweeted Dani Rodrik, professor of international political economy at Harvard’s John F. Kennedy School of Government, it “looks like we will have a monetary experiment that will feature in macro textbooks — either as the policy that revolutionized the field or, more likely, as a cautionary tale.”