PA staff in Gaza shortchanged all over again

Palestinian Authority employees in the Gaza Strip still haven't seen their salaries from April and received only half of their May paychecks, affecting not only their bank accounts but also the Gaza economy. 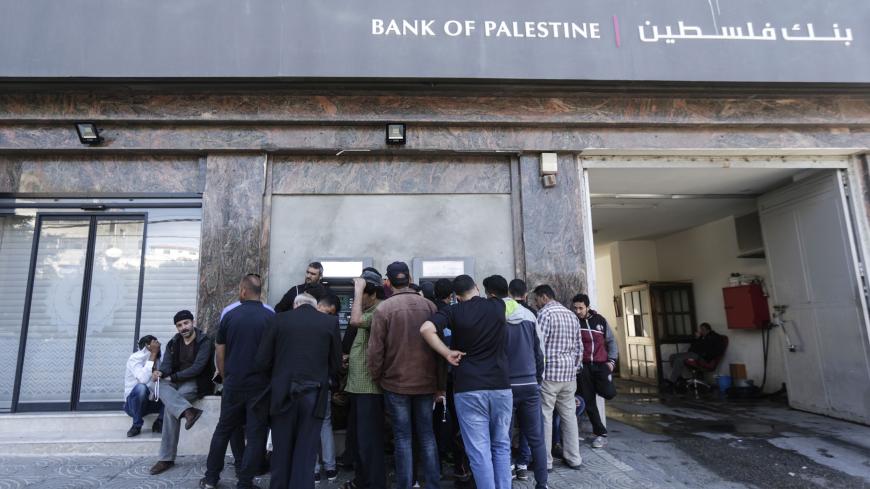 Palestinian employees queue outside a cash machine outside the Bank of Palestine as they wait to withdraw their salaries, Gaza City, Gaza, April 9, 2018. - MAHMUD HAMS/AFP/Getty Images

GAZA CITY, Gaza Strip — The salaries of Palestinian Authority (PA) employees in the Gaza Strip were disrupted yet again in May, but the workers will be paid, according to PLO Executive Committee Secretary-General Saeb Erekat. Erekat gave the assurance May 23, when he clarified his statements that appeared May 21 in Israeli newspaper Yedioth Ahronoth.

In the newspaper interview, Erekat said the government wasn't able to pay PA employees in the Gaza Strip because of economic and technical reasons. In his more recent statement, Erekat said the delay is due to a technical glitch, and that PA employees in the Gaza Strip will get their money. He said his words in the newspaper were taken out of context.

In April, the PA suspended the salaries of all 35,000 public employees in the Gaza Strip. Employees staged protests April 12 in front of some banks, which temporarily closed their doors as a precautionary measure. On May 2, Gaza Strip employees received only half of their salaries for that month. Furious workers protested May 10, demanding to be treated equally with their fellow employees in the West Bank, who have been paid consistently. No explanation so far has been given regarding the missing money.

Conflict between the two main Palestinian parties, Fatah and Hamas, resulted in a PA split in 2007, when Hamas took control of the Gaza Strip. Fatah controls the PA, based in Ramallah in the West Bank, and the PA holds the purse strings of its employees there and in the Gaza Strip. PA President Mahmoud Abbas has imposed sanctions on the Gaza Strip. Though the PA hasn't explicitly declared that it will gradually stop paying its Gaza employees, several political analysts expect such a measure.

Back in May 2017, the PA exerted pressure on Gaza by deducting 30-50% from the salaries of its public servants in the besieged enclave, causing the Gaza Strip’s markets a monthly loss of about $20 million. On average, the PA transfers around $41 million a month to Gaza Strip employees.

This year, salary suspensions have raised concerns about banking transactions being frozen and the cessation of cash transfers to and from the Gaza Strip. Banks across the Gaza Strip also noted that loan defaults increased.

Data from the Palestinian Monetary Authority (PMA) — which acts as a central bank — showed a decline in deposits in Gaza to $1.123 billion in March from $1.157 billion in February.

"The bank was generally affected by the non-payment of salaries of public employees in the Gaza Strip since borrowers from among these employees failed to pay their loan installments," Rabih Dwekat, a media officer at Bank of Palestine, told Al-Monitor. “It's impossible for the bank to predict the future or take any precautionary measures, especially in light of the unstable political situation."

Doha al-Wazany, public relations manager at the Islamic Bank of Palestine, explained that the salary suspension is a national problem not limited to a specific bank or to the banking sector.

“The non-transfer of salaries will surely affect financial institutions as a result of the ensuing default in payment of loan installments,” she told Al-Monitor. “Not only borrowers will be affected by this suspension, but also Visa card holders and guarantors.”

Wazany further noted the bank’s cash flow depends on the salaries of its clients from among these employees. “Civil servants are one of the bank’s most important clients, since their jobs come with various guarantees and facilities,” she said. “The suspension or non-transfer of their salaries, even if for a [limited] period, will affect the bank and its cash flow.”

With respect to the repayment of loans taken out by the PA employees in Gaza, Wazany said the bank has taken appropriate measures to guarantee the rights of depositors and investors in accordance with local laws, the banking sector's regulatory authority and government directives. “The bank will not close its doors in the Gaza Strip due to a crisis in the public sector. Banks can take the appropriate measures to deal with the situation,” Wazany said.

On May 3, the PMA announced it was asking banks to deduct only 50% of the monthly loan repayments due from Gaza Strip PA employees. Al-Monitor tried to contact the PMA to get more details about that action and the Gaza Strip banking situation in general, but was unsuccessful.

Economic analyst Amin Abu Eisha told Al-Monitor the salary crisis has indeed undermined the Gaza Strip’s economy and its residents’ purchasing power. However, he said that while the salary crisis does affect the accounts of the PA employees, it doesn't affect the bank's deposits significantly.

“Based on the PMA instructions, banks deducted 50% of the loan installments due from PA employees, from the currently transferred percentage of their salaries. If the crisis continues, to recover their extended loans, banks could withdraw from these employees’ guarantors, who may be merchants or private sector workers.”

However, banks could actually benefit to some extent from the crisis. Abu Eisha explained that extending the loan repayment period would increase interest revenues. “This may involve credit risks,” he noted, “but these risks do not threaten banks’ operation in Gaza.”

Abu Eisha stressed that Palestinian banks are stable and abide by international standards. He added, “I don't expect the salary crisis to affect banks’ performance. Palestinian banks have outstanding debt of $1.4 billion due from the PA, but this debt hasn't weakened their performance. No bank will shut its doors in the Gaza Strip.”

Nine banks operate in the Gaza Strip, with 58 branches and 84 ATMs.