Defense Minister Avigdor Liberman outdid himself in his latest salvo against the country’s Arab lawmakers. 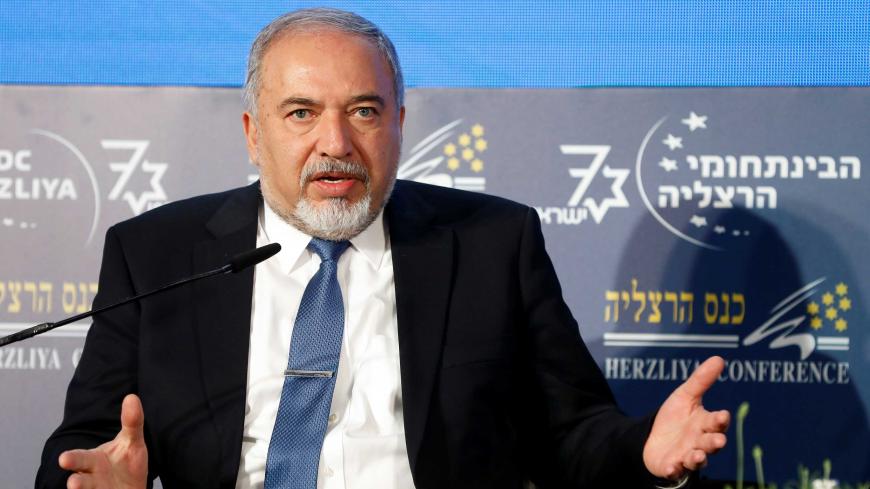 Israeli Defense Minister Avigdor Liberman gestures as he speaks during the Herzliya Conference, in Herzliya, Israel, May 10, 2018. - REUTERS/Nir Elias

Defense Minister Avigdor Liberman has never made any bones about the strong grudge he holds against the Arab members of Israel’s Knesset. He never misses an opportunity to lash out at them, targeting them in every election campaign. His initiative to raise the electoral threshold in order to keep Arab parties out of the legislature, which the Knesset adopted in 2014, resulted in the forced union of the four main Arab political parties.

Not only did his plot fail, the elections held the following year made the union known as the Joint List the third-largest Knesset faction. Despite internal disputes and ideological differences that have emerged on occasion, the glue has held. The lawmakers of the Joint List, like their voters, are fully aware of the danger they face should the alliance disintegrate into its constituent parts.

However, Liberman was undeterred in his all-out war against the elected officials of Israel’s 20% Arab minority. On May 20, he set a new record of incitement against the Arab lawmakers. “Every day that [Knesset member Ayman] Odeh and his partners are walking free, cursing police officers is a failure of the law enforcement system," Liberman tweeted. "Those people belong in prison rather than the Knesset. It's time for them to pay for their actions."

What set him off was the Joint List’s sharp criticism of 19 arrests at a demonstration the previous day in the city of Haifa against the live fire used in recent weeks by Israeli soldiers against Palestinian demonstrators massing along the Gaza-Israel border. In the wake of the Haifa demonstration, the Justice Ministry launched an internal affairs inquiry into suspicions that police kicked and broke the knee of Jafar Farah, the head of the Mossawa Advocacy Center for Arab Citizens in Israel, after arresting him. The following day, the head of the Joint List, Odeh, was caught on camera cursing a police officer who denied him entry to visit Farah in the hospital, calling him a “loser” and using an expletive concerning his mother.

Several days later, the storm reached the Knesset floor, where Arab representatives elected by 450,000 of the 800,000 registered Arab voters clashed with Jewish legislators. “You will not shut us up, not us and not our people. You are inciting against us,” railed Knesset member Yousef Jabareen of the Arab Joint List. Knesset member Anat Berko of the Likud Party responded, “We see here people who openly support Hamas, Hezbollah, [Syrian President Bashar al-] Assad … a list that supports terrorism and supports the breaching of the State of Israel’s borders.”

Knesset member Oded Forer, of Liberman’s Yisrael Beitenu party, came straight to the point: “You are a bunch of terror supporters. … We will do everything possible to depose you.” For those Knesset members on the political right, the very fact that elected Arab officials are protesting and demanding an investigation of alleged police brutality against Arab Israelis makes them terrorists or Hamas supporters, at the very least.

“Liberman takes advantage of every clash and demonstration to incite against an entire public, and not just against the Knesset members who represent their constituents,” Knesset member Ahmed Tibi of the Joint List told Al-Monitor. “An anti-riot police officer who sees an Arab Knesset member in front of him and hears the minister of defense saying I’m a terrorist, what is he supposed to do? He’s supposed to attack the ‘terrorist’ or his community, and to crush him. That’s what happened and that’s what will happen, and it will be more violent.”

Indeed, Liberman made the Arab lawmakers fair game, leaving them helpless once again in the face of incitement by the country’s top defense official. Prime Minister Benjamin Netanyahu did not come to their defense or express any reservations about their being labeled “terrorists.” After all, Netanyahu himself also makes a habit of attacking the country’s Arab citizens whenever he needs to rally his voters. Needless to say, all the other members of Netanyahu’s government were also silent on Liberman’s invective.

Two days before the defense minister declared that Arab Knesset members belong in jail, the prime minister issued a greeting to Israeli Muslims at the start of the monthlong fast of Ramadan. In his videotaped remarks in English, he said, “I’m proud of the fact that in Israel, Muslims, Jews, Christians … live together, work together, thrive together.” As aforementioned, two days later, he no longer had anything to say when his defense minister incited against Israel’s entire Muslim population.

Knesset member Tibi said that, unfortunately, there is no effective parliamentary way to silence the hate campaign against Arab legislators. “Liberman understands the language of fascism. One of his campaign slogans was ‘Liberman understands Arabic,’ meaning he understands how to use force against Arabs. We could complain to the Knesset’s Ethics Committee, but it will result in a reprimand, at most,” Tibi said.

Liberman might even like such a complaint to the Ethics Committee, as it could allow him to use the debate to conduct a populist kangaroo court against members of the Joint List in order to score political points and attract additional right-wing voters.

“The timing of the escalation in attacks against us has to do with Liberman’s political situation,” said Tibi. Although elections are nowhere in sight, polls conducted after Netanyahu presented the Iranian nuclear archives and the Israeli air force targeted Iranian targets in Syria earlier this month, and ahead of the May 14 move of the US Embassy to Jerusalem, indicated a sharp surge in support for Likud and its leader, Netanyahu. Liberman’s Yisrael Beitenu, on the other hand, kept treading water with polls showing it winning six Knesset seats if elections were held today — the same number it garnered in the 2015 elections. The polls show none of these recent achievements has rubbed off on Liberman. “Liberman is strong in words but weak in votes. The result is a search for a scapegoat — and that’s us,” said Tibi. He along with his fellow Arab representatives fear the worst: It could end in murder.